President Joe Biden struggled Tuesday during a discussion on extreme weather threatening the country, inexplicably declaring that tornadoes were no longer referred to as tornadoes.

“Looks like a tornado — they don’t call them that anymore — that hit the crops and wetlands in the middle of the country,” Biden said. “In Iowa, in Nevada, in —it’s just across the board.”

The president spoke about extreme weather and tornadoes during a visit to New Jersey after sudden rains and flooding led to the deaths of over 50 people in the Northeast. Biden paused and returned to his notes, reminding Americans that “we are all in this together.”

It’s unclear what Biden was referring to, but perhaps was talking about the devastating derecho storm in August 2020 that damaged millions of acres of crops in Iowa. 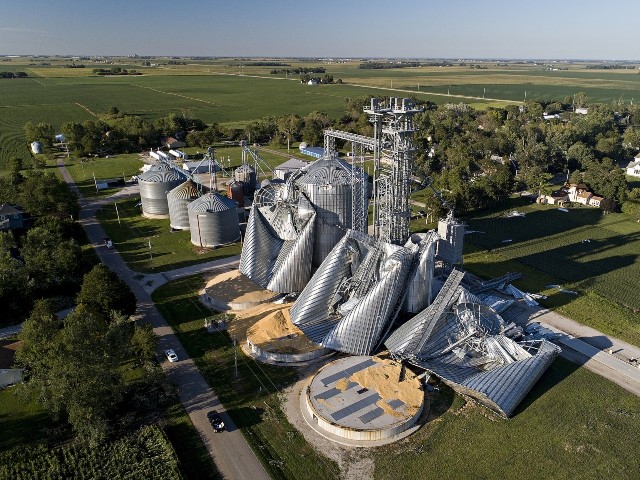 LUTHER, IA – AUGUST 11: In this aerial image from a drone, damaged grain bins are shown at the Heartland Co-Op grain elevator on August 11, 2020 in Luther, Iowa. Iowa Gov. Kim Reynolds said early estimates indicate 10 million acres, nearly a 1/3 of the states land used for crops, were damaged when a powerful storm battered the region a day earlier. (Photo by Daniel Acker/Getty Images)

A derecho is a sustained storm of straight driving winds that typically causes widespread damage.

Biden made a point during a presidential debate in October 2020 that the derecho storm was a direct correlation to climate change.

“Look what’s happened in just the Midwest,” Biden said. “These storms that come through and wipe out entire sections and counties in Iowa. That didn’t happen before. They are because of global warming.”

Biden asserted that time had run out to stop climate change from causing extreme weather events in the country.

“Climate change is real. We’re living through it now. We don’t have any more time,” he said.