Left-wing Rep. Alexandria Ocasio-Cortez (D-NY) reacted to the backlash she received after showing up to the 2021 $35,000 per ticket Met Gala in a “Tax the Rich” dress, saying critics are simply “disdainful and unsupportive” of “working class women.”

“Honestly our culture is deeply disdainful and unsupportive of women, especially women of color and working class women (and LGBTQ/immigrant/etc) from the bottom up,” Ocasio-Cortez — who has an estimated salary of $174,000 per year — wrote in an Instagram Story on Tuesday. 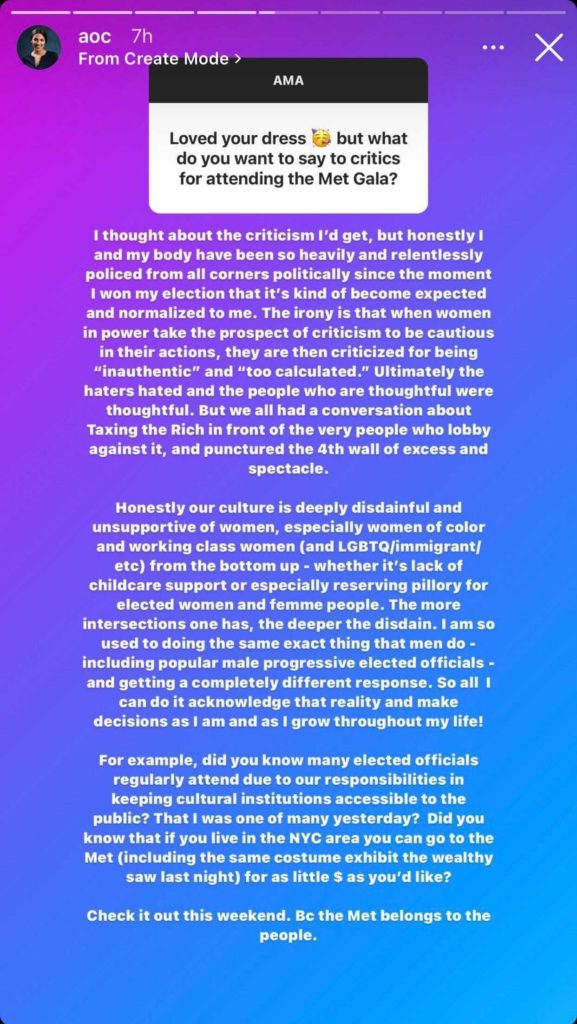 The congresswoman was responding to a follower’s question, which read, “Loved your dress, but what do you want to say to critics for attending the Met Gala?”

Ocasio-Cortez was skewered on social media for showing up to the Met Gala — which costs $35,000 per ticket — on Monday wearing an ultra-fancy designer dress with the message “Tax the Rich” emblazoned on the back.

“I thought about the criticism I’d get, but honestly I and my body have been so heavily and relentlessly policed from all corners politically since the moment I won my election that it’s kind of become expected and normalized to me,” Ocasio-Cortez added of the criticism she received.

“The irony is that when women in power take the prospect of criticism to be cautious in their actions, they are then criticized for being ‘inauthentic’ and ‘too calculated,'” she added.

The left-wing Ocasio-Cortez went on to suggest she was not one of the elite, but rather, she was infiltrating the lavish, star-studded event, claiming that she “punctured the fourth wall,” and talked about “taxing the rich” right in front of “the very people who lobby against it.”

“We all had a conversation about Taxing the Rich in front of the very people who lobby against it, and punctured the 4th wall of excess and spectacle,” Ocasio-Cortez insisted.

The congresswoman then changed the subject from the Met Gala to the Metropolitan Museum of Art, where the event is held.

“Did you know that if you live in the NYC area you can go to the Met (including the same costume exhibit the wealthy saw last night) for as little $ as you’d like?” Ocasio-Cortez wrote.

It is not true, however, that a common person can attend the Met Gala. Because even if someone were able to afford a $35,000 ticket, they would have to be approved by Vogue editor-in-chief Anna Wintour, and placed by Vogue at a table, The Cut reported.

As for simply visiting the Metropolitan Museum of Art — after the lavish, star-studded event is over and all the celebrities have gone home — a commoner can purchase admission tickets at $25 for adults, $17 for seniors, and $12 for students.

The museum is “free” for members, patrons, and children under 12. But memberships start at $110 per year.