Former Virginia Gov. Terry McAuliffe (D) admitted during a virtual meeting Tuesday that President Joe Biden’s low approval rating is causing his campaign “a lot of headwinds” as McAuliffe competes with Republican Glenn Youngkin in the race for Virginia governor.

“But we’ve got to get Democrats out to vote,” McAuliffe warns attendees in the video. “We are facing a lot of headwinds from Washington, as you know. The president is unpopular today unfortunately here in Virginia so we have got to plow through.”

Biden’s popularity sharply declined in August, according to several polls charted by FiveThirtyEight, and, after two months, his approval rating has shown no sign of recovery.

In August, the Biden administration led a hasty and disastrous evacuation mission in Afghanistan after the Taliban took over the country, leading to outspoken criticism of the president’s actions from across the political spectrum. In addition to Afghanistan, other factors that have driven Biden’s ratings under water include a draconian coronavirus vaccine mandate he announced in September and his multitrillion-dollar infrastructure plan — a key item on the president’s agenda — hitting an impasse among Democrats in Congress.

The drop in Biden’s popularity coincides with tightening polls in the Virginia governor’s race, which is now less than one month away. 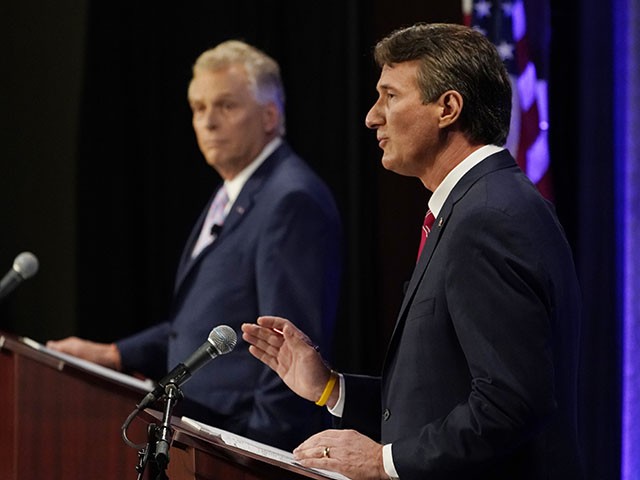 While McAuliffe had consistently been leading in polls by a few points for months, Youngkin’s campaign has recently seen some small victories, including a lead among likely voters in a University of Mary Washington poll, a virtual tie in the latest Emerson College poll, and a Cook Political Report race ratings change from “lean D” to “toss up.”

A Republican Governors Association spokesperson highlighted the new clip of McAuliffe on social media, commenting that the Virginia Democrat appeared to be “coming to terms with reality last night.”

Jacob Bliss contributed to this report.