Iranian Foreign Minister Hossein Amirabdollahian said Tehran “will not tolerate geopolitical change in the Caucasus” while visiting Moscow on Wednesday, adding that Iran has “serious concerns about the presence of terrorists and Zionists in this region,” Agence France-Presse (AFP) reported.

“We certainly will not tolerate geopolitical change and map change in the Caucasus,” Amirabdollahian told reporters in Moscow on October 6, as quoted by AFP.

“We have serious concerns about the presence of terrorists and Zionists in this region,” he added.

RT, a Russian state-owned television network, also quoted Amirabdollahian at Wednesday’s press briefing. The network provided greater context for the foreign minister’s remarks during a live translation of the conference from Persian to English.

“When it comes to the South Caucasus … we believe that the region shouldn’t suffer anymore. Countries of the region are our brother countries and we want to stop the suffering,” Amirabdollahian told reporters according to RT’s translation.

“We didn’t like what our Caucasus neighbors say [sic],” he acknowledged. “We believe that we need to have positive relations.”

“We don’t want to have the map of the Caucasus redrawn and we are concerned with terrorists in the region,” he claimed.

“When it comes to the Palestinian problem, our position is clear, and also our position on Zionists is clear,” Amirabdollahian added, implying that the alleged presence of “terrorists” in the South Caucasus was tied to Israel.

“When it comes to the security of Iran, we have good ties to all our neighbors and want friendship with all countries as well as cooperation in securing the interests of our country,” he said.

Iran’s top diplomat spoke to reporters in Moscow on October 6 alongside his Russian counterpart, Sergei Lavrov. The two met to discuss Iran and Russia’s bilateral relationship, which Amirabdollahian said was a top priority for Tehran.

Amirabdollahian likely referred to Azerbaijan when alluding to displeasure with Iran’s “Caucasus neighbor” on Wednesday. Azerbaijan enjoys warm relations with Israel, Tehran’s greatest foe, and is located in the South Caucasus along Iran’s northern boundary. 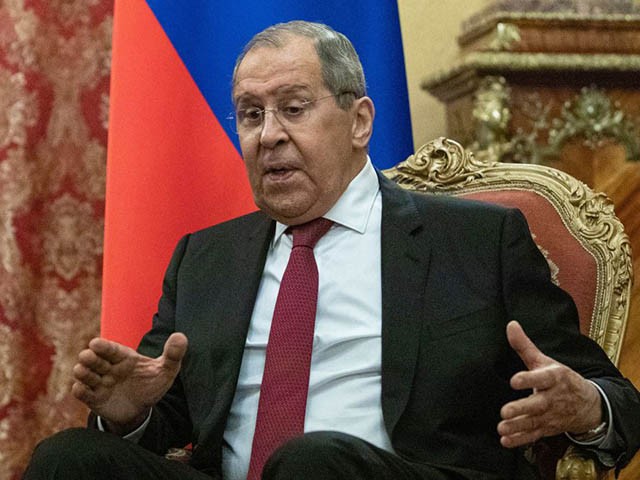 Russian Foreign Minister Sergei Lavrov speaks with the UN Special Envoy for Syria during their meeting in Moscow, on July 22, 2021. (Photo by SERGEI ILNITSKY/POOL/AFP via Getty Images)

The two states — which were united for most of history before the Russian Empire forced Azerbaijan’s secession in the early 19th century — currently share a 430-mile-long border.

Tensions between the two nations have increased since late September when Iran staged military drills in its northwest border areas directly across from Azerbaijan. Tehran said the exercises were a response to an alleged “Zionist” presence near its borders, again implying that Azerbaijan harbors a militant Israeli presence.

“Iran will not tolerate the presence of the Zionist regime near our borders,” he added.

Baku reacted to Tehran’s belligerent military action near its border by announcing its own joint exercises with Turkey in the Azeri town of Nakhchivan, located a short distance from northwestern Iran, on October 3.

“The Steadfast Brotherhood-2021 drill will take place with the participation of Turkey and Azerbaijan in Nakhchivan, Azerbaijan between 5-8 October,” a spokeswoman for Turkey’s Ministry of Defense said at the time.

Azerbaijan defeated Turkey-backed Armenia in a 44-day war between the Caucusus neighbors last year. Baku deployed Israeli-made drones to help its forces gain territory from Armenia in Nagorno-Karabakh, a hotly contested region that is home to two major oil pipelines.

Iran and Azerbaijan are the two largest Shia Islam majority countries in the world, and the only states officially recognized as such. They share an ethnic makeup and cultural history that would ostensibly make them allies. Baku and Tehran are increasingly at odds, however, due to Azerbaijan’s close ties to Israel.

Baku has purchased billions of dollars worth of military equipment from Jerusalem in recent years. Reports in August suggested Azerbaijan was on track to buy $12 billion in additional weapons from Israel in the coming months. Azerbaijan, for its part, serves as a major oil supplier for Israel, providing as much as 45 percent of the nation’s petroleum imports.

“Israel gets about 40-45 percent of its oil needs from Azerbaijan via the Baku-Tbilisi-Ceyhan pipeline, which reaches Israel via tankers that dock in the Turkish port city of Ceyhan,” Caspian News reported in March 2020. “In 2018, the total value of trade between the two countries hit $1.3 billion from what was $672 million in 2017.”