As law enforcement officers and healthcare workers are being forced to choose between getting a vaccine or losing their job, Los Angeles County Sheriff Alex Villanueva said he will not enforce the city’s vaccine mandate.

In a video released on Thursday, Villanueva said that the issue of vaccines has become “too politicized” and did not wish to lose 10 percent of his workforce due to the mandate.

I’m not forcing anyone. The issue has become so politicized. There are entire groups of employees that are willing to be fired and laid off rather than get vaccinated, so I don’t want to be in a position to lose 5 percent, 10 percent of my workforce overnight on a vaccine mandate while the same time we are barebones with the defunding effort, so this is like the worst of two worlds.

Villanueva did not say if he would require officers to submit a weekly negative coronavirus test if they decide to opt out of the vaccine.

On Wednesday, the Los Angeles City Council approved an ordinance requiring vaccine passports for indoor restaurants, bars, gyms, and salons. Pharmacies and grocery stores were exempt from the mandate.

“The ordinance will go into effect beginning on Nov. 4 and is believed to be one of the strictest COVID-19 vaccine-related mandates in the U.S. Bars, gyms, entertainment venues and shopping centers will all be subject to this new requirement,” reported The Hill.

Come November 29, businesses that violate the order will be fined $1,000 for a second offense, $2,000 for a third offense, and $5,000 for a fourth. The city still has not determined what department or agency will enforce the order.

“The city department that will enforce this ordinance has not yet been determined, but the Department of Building and Safety was noted as being the most relevant,” noted The Hill. “However, the department does not have the necessary staffing to enforce the rule.” 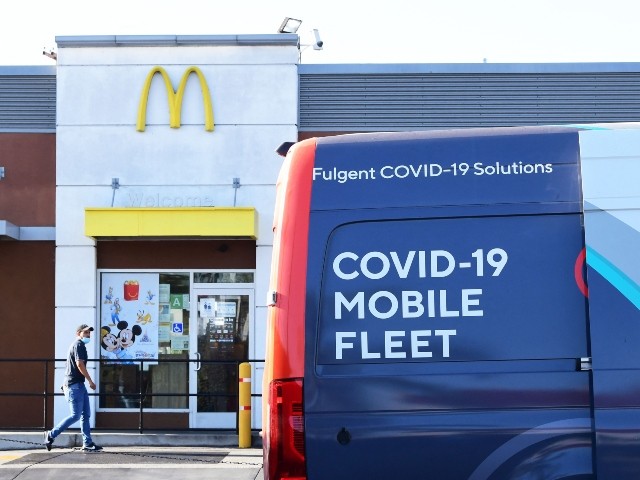 A man approaches a van from a Covid-19 vaccine mobile clinic hosted by McDonald’s and the California Department of the Public Health on September 21, 2021 in Los Angeles, California. – California leads the nation with the lowest rate of Covid-19 transmission as unvaccinated people continue to be more likely infected and hospitalized than those vaccinated. (Photo by FREDERIC J. BROWN/AFP via Getty Images)

Villanueva’s opposition to the vaccine mandate comes after he refused to enforce the city’s mask mandate, arguing that it was “not backed by science and contradicts the U.S. Centers for Disease Control and Prevention (CDC) guidelines.”

“The Los Angeles County Department of Public Health (DPH) has authority to enforce the order, but the underfunded/defunded Los Angeles County Sheriff’s Department will not expend our limited resources and instead ask for voluntary compliance,” he said. “We encourage the DPH to work collaboratively with the Board of Supervisors and law enforcement to establish mandates that are both achievable and supported by science.”