Polling from CNBC shows His Fraudulency Joe Biden’s approval numbers sliding dramatically, primarily due to his mishandling of the economy.

Is it any wonder Americans are freaking out? As of this writing, we are facing record inflation, exploding energy prices (with winter right around the corner), an unprecedented supply chain failure (with Biden’s secretary of transportation enjoying months of paid paternity leave), the constant threat of higher taxes, a president incapable of putting together two sentences, and a White House  dismissing  these essential quality of life issues off as “high-class problems” and the “tragedy of undelivered treadmills.”

In this country, things are so bad that, even with billions of dollars in monthly establishment media propaganda behind him, Biden’s numbers are in total freefall, and Biden himself is in hiding.

His poll slide started with Biden’s incomprehensible surrender in Afghanistan, where His Fraudulency gifted the Taliban terrorists with hundreds of American hostages and tens of billions of dollars in operational U.S. war weapons. It was then when the country realized that the adults actually were not in charge. 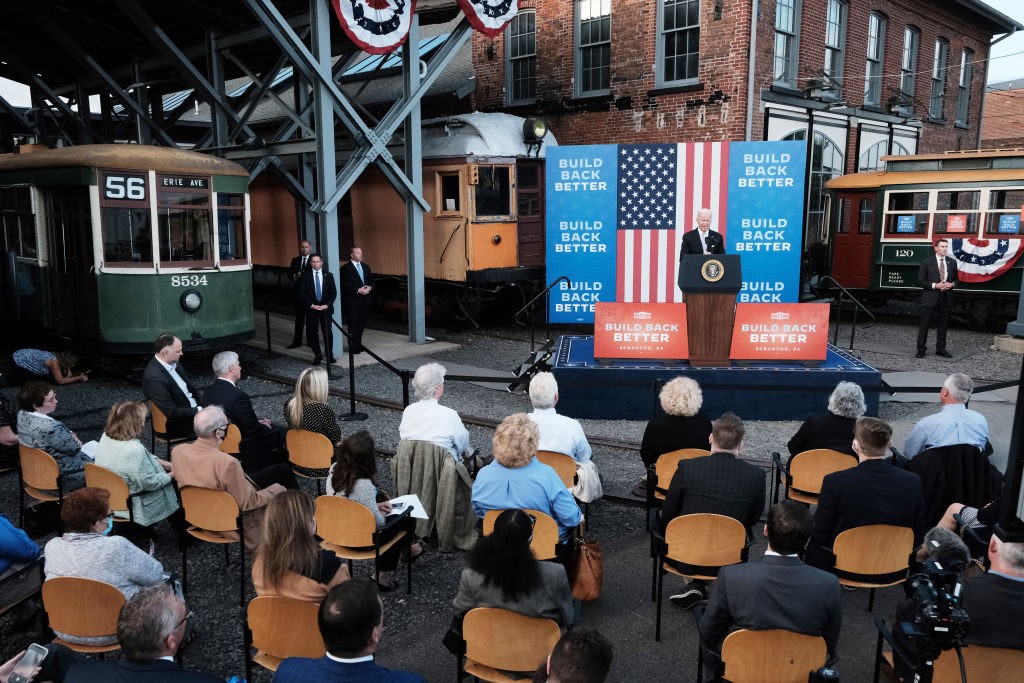 President Joe Biden speaks at an event at the Electric City Trolley Museum in Scranton on October 20, 2021 in Scranton, Pennsylvania. In an effort to appease West Virginia Senator Joe Manchin, the President has discussed a $1.75 to $1.9 trillion price tag for the spending package that’s currently being negotiated. (Spencer Platt/Getty Images)

Then Biden’s seemingly deliberate mismanagement of the economy began to bear real fruit.

His profligate spending, his unrelenting threat of more taxes and regulation, his taking his eye off the ball of our supply chain, his paying people not to work (including Transportation Secretary Pete Buttigieg), and his war against affordable energy all resulted in an economic downturn that didn’t have to happen. And this poll shows just how worried people are…

Inflation now ties with the coronavirus as the biggest concern for Americans, up 16 points from the prior survey. A plurality of 47% of the public believe there will be a recession in the next year, up 13 points from when the question was last asked in 2019.

“Last quarter, the economic numbers were flashing yellow for Biden, but now that’s intensified and the light is flashing red, and it’s accompanied by multiple blaring sirens,” said Micah Roberts, partner at Public Opinion Strategies, the Republican pollster for the survey.

Recession worries come with increasingly negative views about the current and future state of the economy: 46% say the economy will get worse in the year ahead, the most in the 13-year history of the poll and 79% judge the economy as just fair or poor, the most since 2014.

Look at that! Biden broke another record. In the history of this particular poll, more people are concerned (rightly) about a recession than ever before, a plurality of 46 percent.

Well, of course, we’re going to go into recession. While the White House laughs about the “tragedy of undelivered treadmills,” these supply chain issues hurt a whole lot more people than the housewife waiting for her treadmill. How about the people who sell and transport those treadmills?

Like exploding gas prices, empty shelves freak people out and depress them. These things work as signals that tell people something is terribly wrong in the world. They unsettle us, and when we’re unsettled, we spend less, and when we spend less, that’s when you enter a recession.

And let’s not forget the coronavirus. Biden totally botched the vaccine rollout. This idiot couldn’t even sell a free miracle vaccine.

Biden is upside down by 14 points on his handling of the economy: 40 percent approve, 54 percent disapprove.

Hey, if you think inflation is terrible now, just wait till Biden passes his next trillion-dollar spending package — which is inevitable.