The Federal Bureau of Investigation (FBI) and the Central Intelligence Agency (CIA) have the potential to be incorrectly weaponized against the American people in the name of fighting “domestic extremism,” Rep. Rick Crawford (R-AR) warned, as reported by the Washington Times on Saturday.

“Our concern is that the FBI, being a preeminent counterterrorism agency, along with the CIA [and NSA], that those assets could be turned inward to target U.S. citizens without a foreign nexus,” said Crawford, who is on the counterterrorism and counterintelligence panel of the House Permanent Select Committee on Intelligence.

“You have people that are ramping up the rhetoric on domestic violent extremism … to sort of make the case for and essentially justify the misuse, potentially, of intelligence assets that are specifically authorized for foreign threats,” he continued.

According to the report, the FBI has 2,700 open domestic extremism investigations, “more than double the usual number of cases.” The Biden administration has reportedly doubled down on its efforts to combat the so-called threat following the January 6 riot at the U.S. Capitol, with Homeland Security calling violent extremists a “national threat priority.” 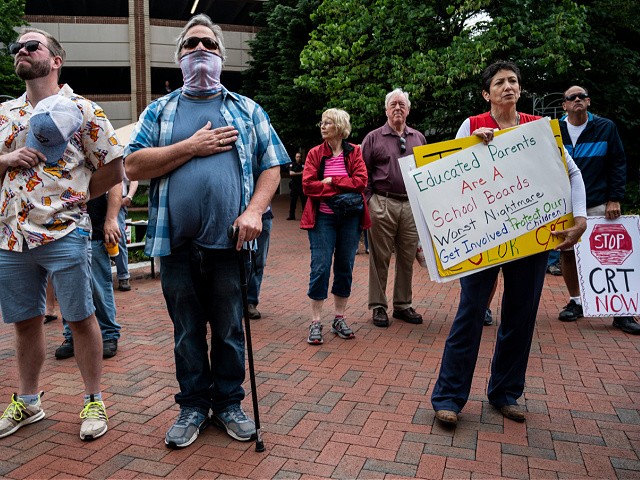 People hold up signs during a rally against “critical race theory” (CRT) being taught in schools at the Loudoun County Government center in Leesburg, Virginia, on June 12, 2021. (Photo by ANDREW CABALLERO-REYNOLDS/AFP via Getty Images)

The Times pointed to U.S. Attorney General Merrick Garland’s recent scandal: the Department of Justice (DOJ) issued a memorandum addressing “harassment, intimidation and threats of violence” against school officials and school board members. The memo was released just days after a letter to President Joe Biden from the National School Board Association (NSBA) sought federal law enforcement help to cope with frustrated and concerned parents the group likened to “domestic terrorists.” Garland later admitted he took the word of the NSBA, and the union ended up renouncing its letter.

“We’re playing fast and loose with the definition of what constitutes a domestic terrorist, and that’s the danger of going down this road without the appropriate safeguards,” Crawford said of the debacle.

In another example, Biden’s Department of Homeland Security (DHS) labeled opponents to coronavirus measures as “potential terror threats,” according to an NBC News screen capture reported by Jack Posobiec in August.

They are referring to anti-lockdown protesters as terrorists in public now pic.twitter.com/8MbnDWvcaw

“The job of the Department of Defense is to keep America safe from our enemies, but we can’t do that if some of those enemies lie with our own ranks,” Defense Secretary Lloyd Austin said during his confirmation hearing, weeks after the Capitol riot.

Democrat lawmakers have been quick to toe the line, warning that veterans and troops are “uniquely susceptible to recruitment by far right and White supremacy groups.”

Republicans have slammed the narrative, however; Republican Rep. Mike Bost (R-IL), who is also on the committee, said there is “very little data” on how many veterans are actually involved in violent extremism.

“And there is no question that the vast majority of veterans are law-abiding and peaceful. We cannot let a few bad apples spoil the whole bunch,” he said. 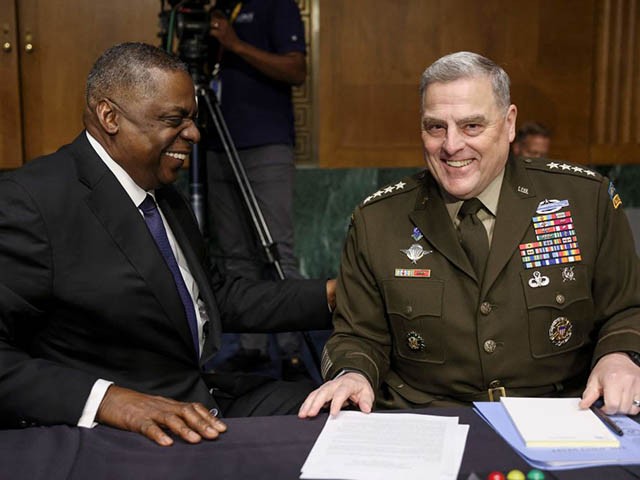 US Defense Secretary Lloyd Austin laughs with Chairman of the Joint Chiefs of Staff Gen. Mark Milley before their testimony at a Senate Committee on Appropriations hearing on the 2022 budget for the Defense Department, on Capitol Hill in Washington, DC, June 17, 2021. (Photo by EVELYN HOCKSTEIN/POOL/AFP via Getty Images)

Rep. Jim Banks (R-IN) joined in at the hearing, saying that acting like “you’re going to save our veterans from becoming political terrorists is offensive to every veteran in America.”

Senior homeland security research fellow at the conservative Heritage Foundation Lora Ries told the Times that Democrats are playing up the narrative to “go after conservatives.”

“This is what the left is focusing on and running with and continuing this narrative of domestic violence and White supremacists specifically being the most persistent and lethal threat in the homeland,” she said. “They completely ignore what actually happened in 2020. They don’t mention Antifa or [Black Lives Matter]. And so this is completely biased, and it’s being used to go after conservatives and, in the instance of this hearing, to go after veterans and silence them from free speech.”

Crawford told the Times he is growing more concerned that the government will blur the lines of what is acceptable in order to combat people they view as “domestic violent extremists.”

“We’re kind of treading on thin ice here with regard to just sort of cavalierly throwing this term around,” he said. “I think we’ve gone a step too far — well beyond a step too far. I think this is dangerous.”