Kyle Rittenhouse said during his testimony Wednesday that a friend, Dominick Black, bought him an AR-15 rifle in the spring of 2020.

Rittenhouse was 17 years old at the time the rifle was purchased. He said he told Black beforehand that he would not take ownership of the gun until he was 18.

Rittenhouse testified, “We were up north going camping, and Dominick Black brought his rifle, and we were talking, and I was like, ‘Hey, what if we get a rifle for me? I’ll give you the money. You can purchase it. It’s yours until I’m 18.'”

He summarized, “I bought the rifle for Dominick, and once I’m 18, we can do a private sale, and we can have it turned over to my name.”

The prosecutor retorted, “Because you knew, as a 17-year-old, you could not have that gun.”

Rittenhouse responded, “I knew I could not buy that  gun.”

The prosecutor emphasized, “You knew you could not possess that gun also, correct?” 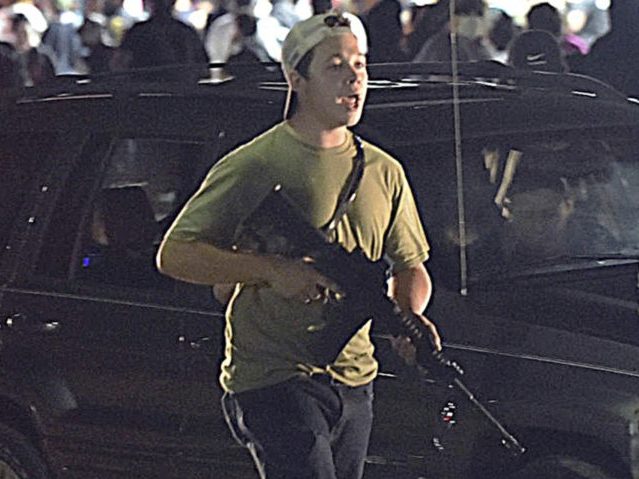 In this August 25, 2020, file photo, Kyle Rittenhouse carries a weapon as he walks along Sheridan Road in Kenosha, Wisconsin, during a night of unrest following the weekend police shooting of Jacob Blake. (Adam Rogan/The Journal Times via AP, File)

Rittenhouse explained that he applied for a Firearm Owners Identification (FOID) card in Illinois in May 2020, so he could legally take possession of the gun. (However, he noted that the FOID card application process was backlogged, and, in November 2020, he received notice that his specific FOID application was halted after prosecutors filed charges against him regarding Kenosha.)

Having no FOID card at the time the rifle was purchased, Rittenhouse testified that he agreed to have the rifle stored in Black’s stepfather’s house in Kenosha, Wisconsin.

Rittenhouse said he made that decision because Black’s stepfather “had a safe.”