Veterans Day was first known as Armistice Day. It was established by Congress in 1926, to honor Americans who fought in World War One, which came to a victorious end with the armistice of November 11, 1918. In a White House proclamation, President Calvin Coolidge described the conflict, then known as the Great War, as “the most destructive, sanguinary, and far-reaching war in human annals.”

Yet a few years later came an even greater and more destructive war, World War Two, and soon thereafter, a smaller war in Korea.  So in 1954, Congress renamed Armistice Day, by now a federal holiday, as Veterans Day to honor all veterans who served in peacetime or in wartime.

Later that year, President Dwight D. Eisenhower—himself, of course, a  veteran of legend—issued a statement declaring that the whole nation should honor its vets: “To insure proper and widespread observance of this anniversary, all veterans, all veterans’ organizations, and the entire citizenry will wish to join hands in common purpose.” 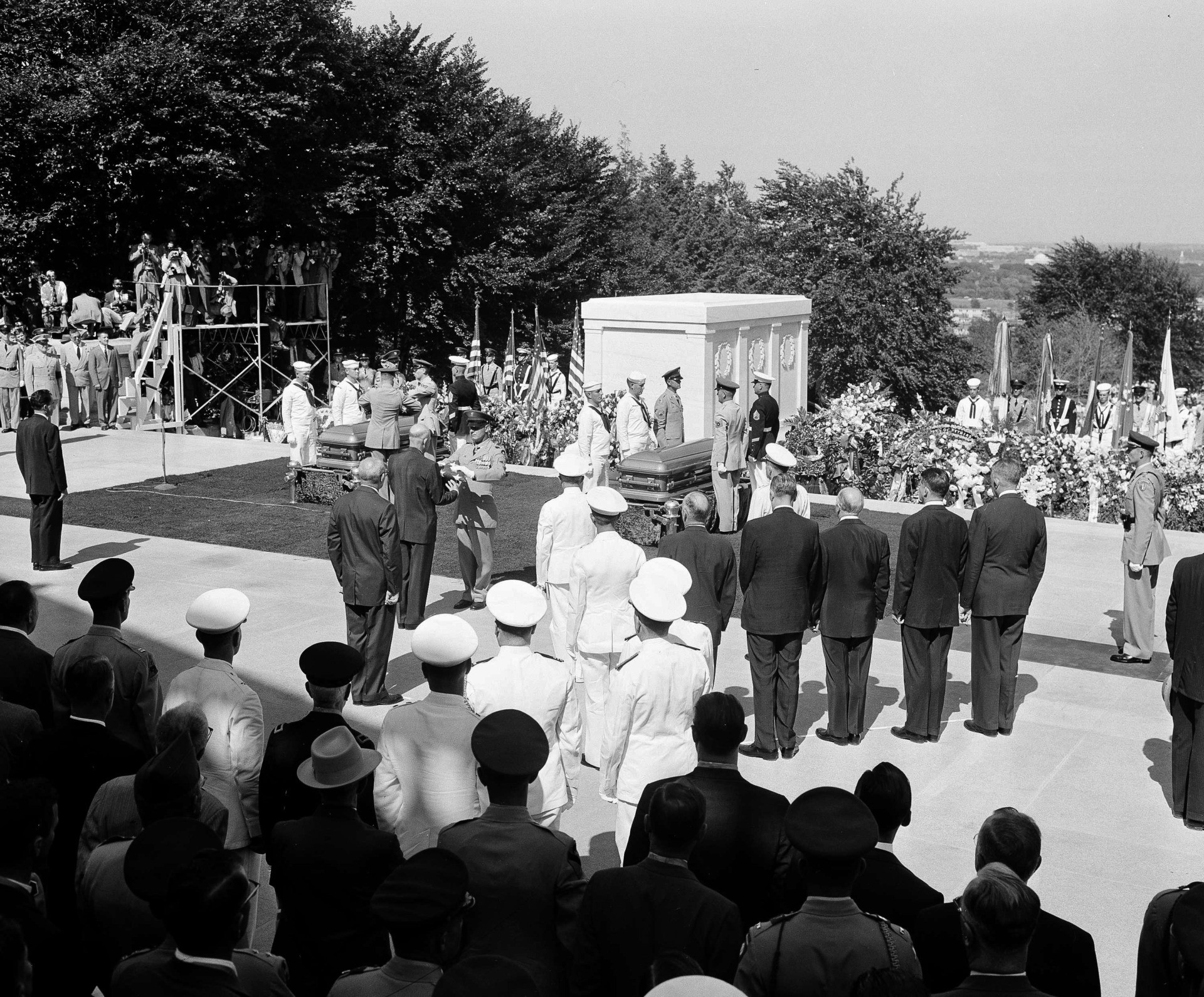 President Dwight Eisenhower receives from Master Sgt. Ernest Kouma of Ft. Carson, Colorado, the folded flag held above the casket of World War II Unknown, right, during solemn committal service May 30, 1958. The casket of the Korea Unknown is at left. The tomb of the Unknown Soldiers of World War I is in right background. (AP Photo)

Join hands in common purpose. A noble goal for Americans, and yet in these polarized times, that goal might seem to be a little bit aspirational.  Sadly, these days, not everyone is on board with patriotic devotion and ceremony.

For instance, there’s the city of Austin—a hyper-liberal blue dot inside red Texas—which recently forced the cancellation of a planned Veterans Day parade. Why? The stated reason was that parade organizers were not in compliance with the city’s Covid-19 restrictions, which bespeak Austin’s continuing blue nanny-state orientation.

According to the Austin Veteran Parade Foundation, the city was demanding that parade organizers “verify all participants and spectators to have either a current negative Covid test or be vaccinated.” As the organizers explained, “This is something that we could not do, as we anticipated some 30,000 attendees to the parade.”

Regular Breitbart News readers won’t be surprised to learn that a left-wing place such as Austin has been imposing a double standard on outdoor activity. Last year, as Black Lives Matter protests erupted in Austin, city leaders took a relaxed view of the mass gatherings. Authorities never worried about permits for the demonstrations, let alone whether or not the protestors—some of them, of course, violent rioters—were wearing masks or practicing social distancing.

In fact, just last month there was a massive pro-abortion march and rally in Austin, including an outdoor concert, all without much social distancing. To put it mildly, it certainly must have been challenging for the left-wing organizers to confirm that everyone present was vaccinated or showed a negative Covid test, assuming that such protocols were required of them at all. 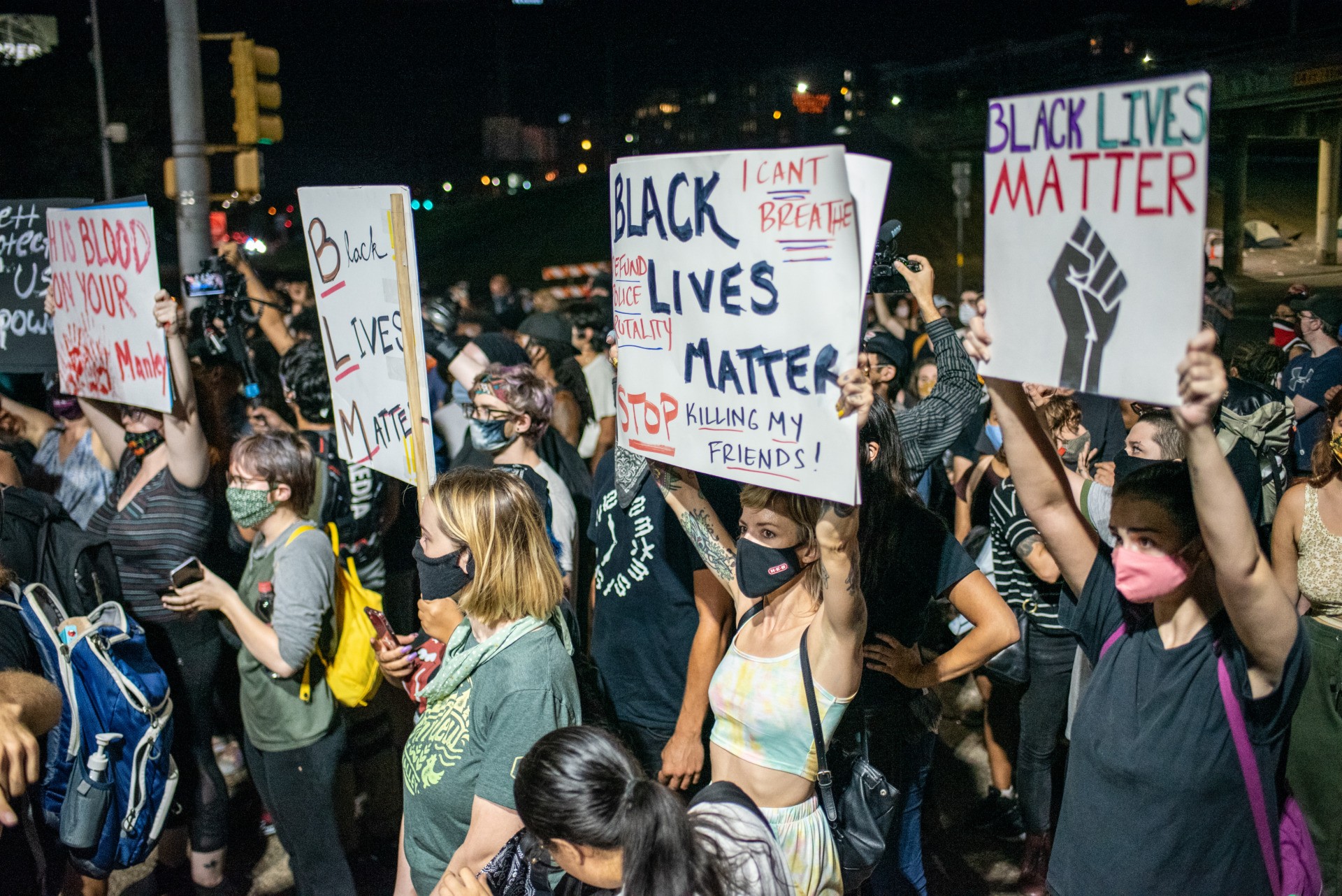 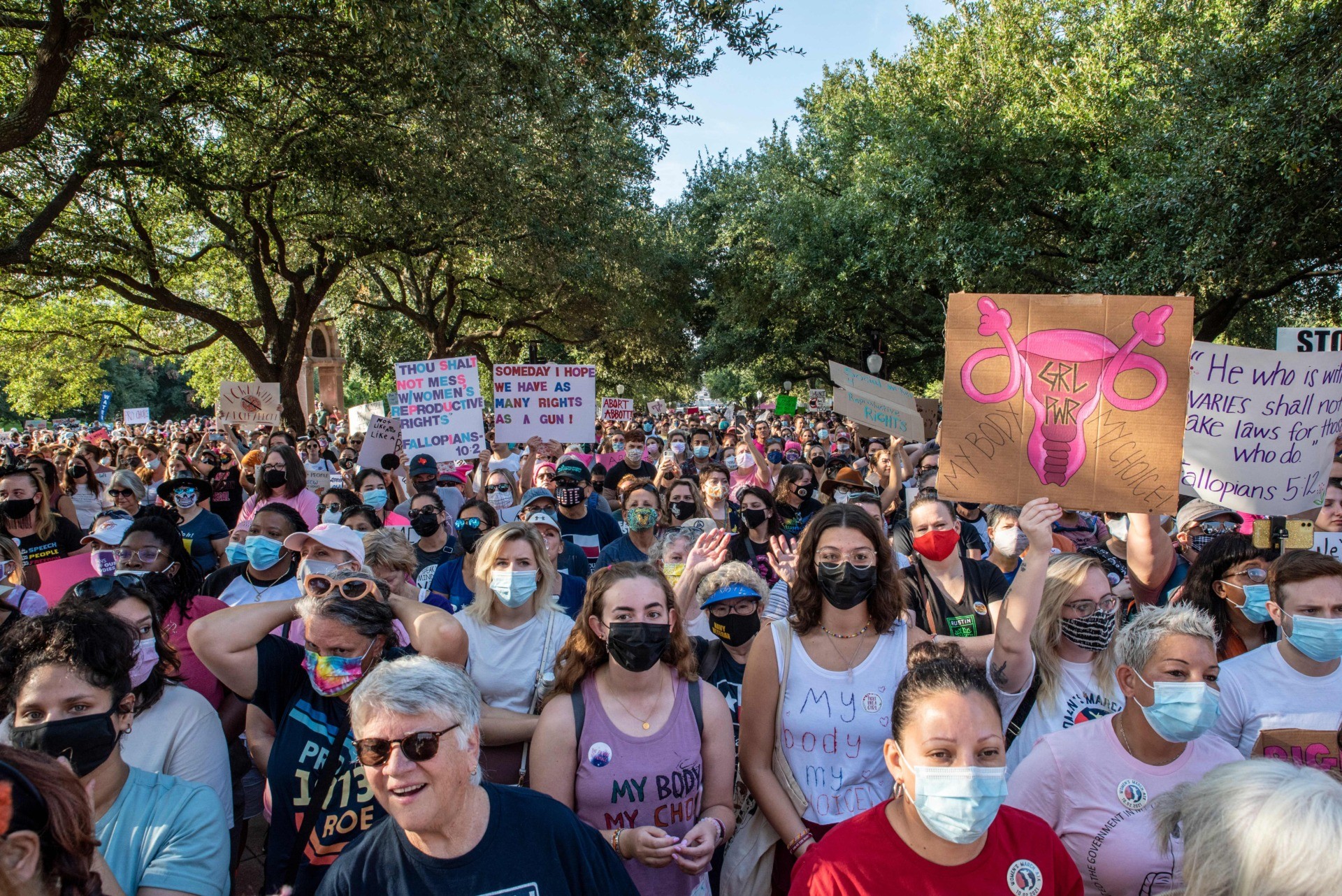 Protesters take part in a pro-abortion march and rally in Austin, Texas, on October 2, 2021. (SERGIO FLORES/AFP via Getty Images) 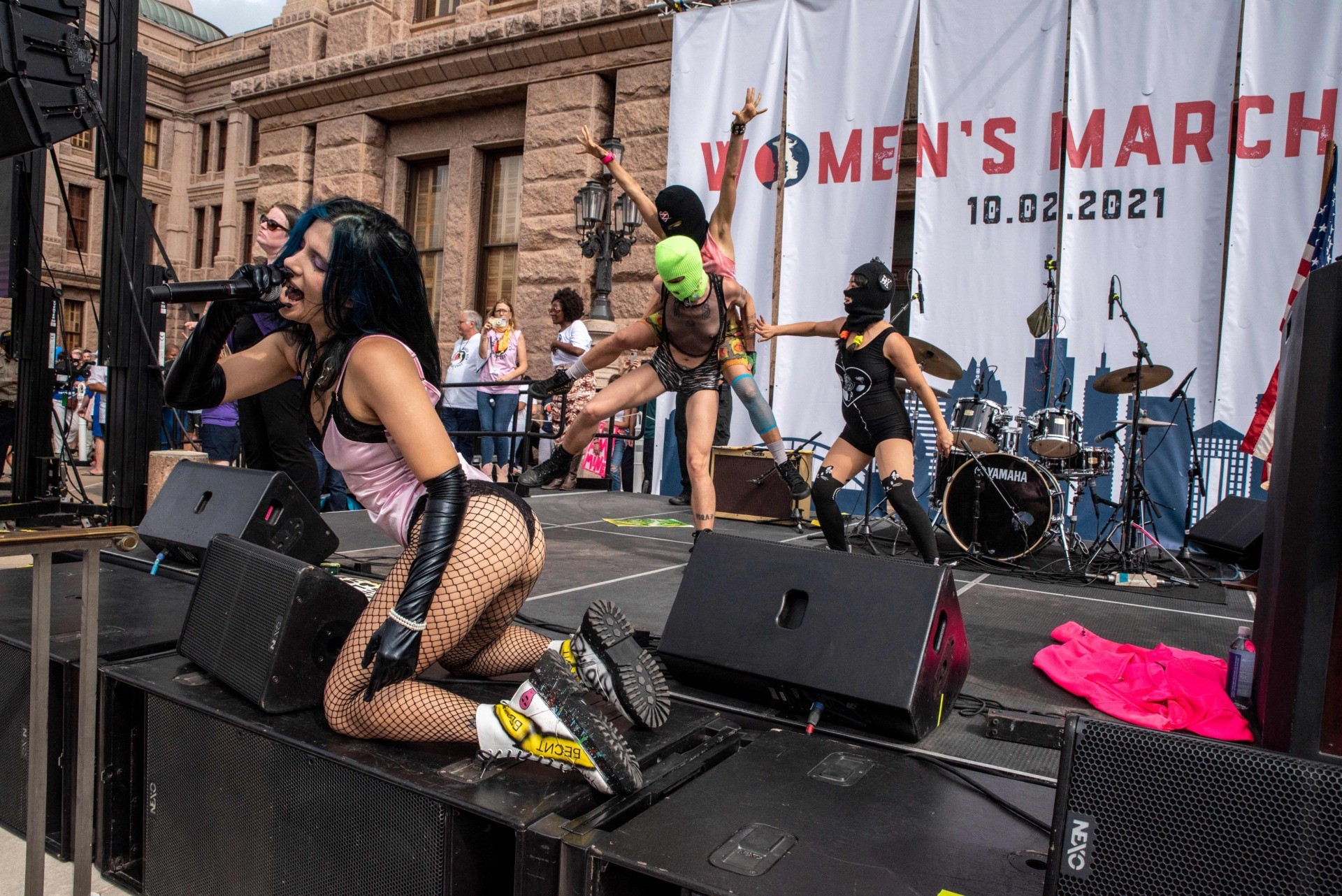 Nadezhda Tolokonnikova of the group Pussy Riot performs for the crowd at a large pro-abortion rally in Austin, Texas, on October 2, 2021. (SERGIO FLORES/AFP via Getty Images)

In addition to left-wing protests, Austin continues to favor other activities that it deems acceptable, while disfavoring those it finds  unacceptable. Thus the Austin FC soccer team has been playing regularly, selling out the 20,000-seat Q2 Stadium. Even in the midst of the pandemic, seats are snapped up in seconds.

Does the city worry about whether these soccer fans are all tested and vaccinated? Of course not!

In fact, Austin is so left-wing that it continues to undermine the police. Whereas pro-police ballot efforts succeeded this year in such liberal towns as Minneapolis and Seattle, a pro-cop effort in Austin was defeated, by more than 2:1.

So if Austinites don’t like their own police, what chance did our veterans have?

To be sure, one resident of Austin fought to keep the parade within city limits. That would be Governor Greg Abbott, who offered the parade organizers the use of the grounds of the state capitol. Sadly, that alternative plan fell through.

However, other patriotic ceremonies were able to continued in Austin, such as the placing of American flags on each grave at the Texas State Cemetery. And without a doubt, across Texas—as well as across the nation—we’ll see plenty of proper honoring of veterans.

Yet still, the Austin experience should tell us something. It should make us realize that important civic rituals are not always spontaneous. That is, someone has to plan for them—just as Congress did back in 1926—and someone has to organize them and work to keep them alive.

Back in 1954, President Eisenhower took the November 11 holiday so seriously that he formally designated the head of the Veterans Administration to chair a Veterans Day National Committee. As the 34th president wrote, “I am requesting the heads of all departments and agencies of the Executive branch of the Government to assist the Committee in its work in every way possible.”

In fact, planning for important national holidays goes back to the beginning of the republic in 1776—to the Fourth of July. As John Adams, the future second president, wrote in a letter to his wife Abigail of the new holiday:

I am apt to believe that it will be celebrated, by succeeding Generations, as the great anniversary Festival.  It ought to be commemorated, as the Day of Deliverance by solemn Acts of Devotion to God Almighty.  It ought to be solemnized with Pomp and Parade, with Shews, Games, Sports, Guns, Bells, Bonfires and Illuminations from one End of this Continent to the other from this Time forward forever more.

Thus the lesson: Leave nothing to chance. 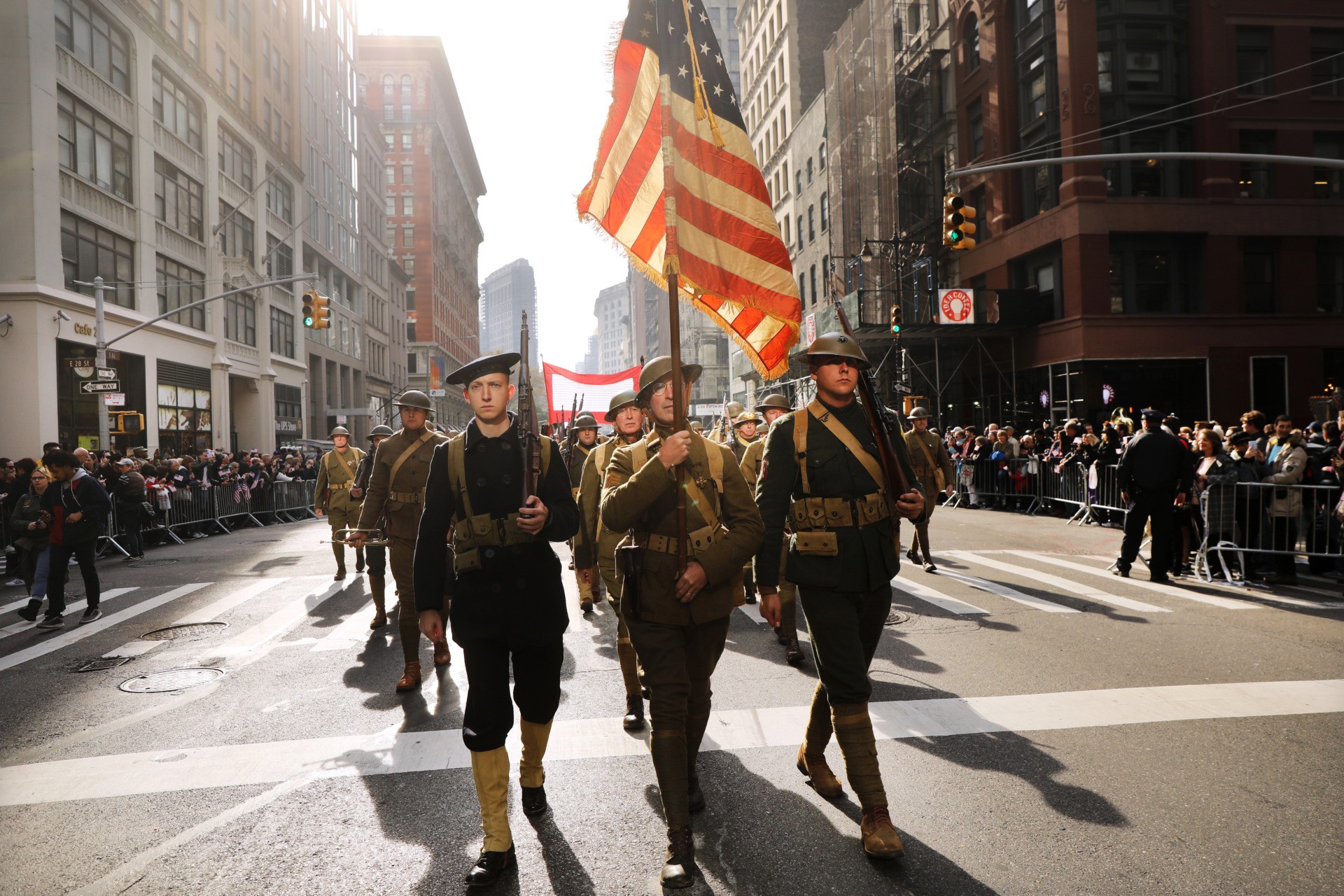 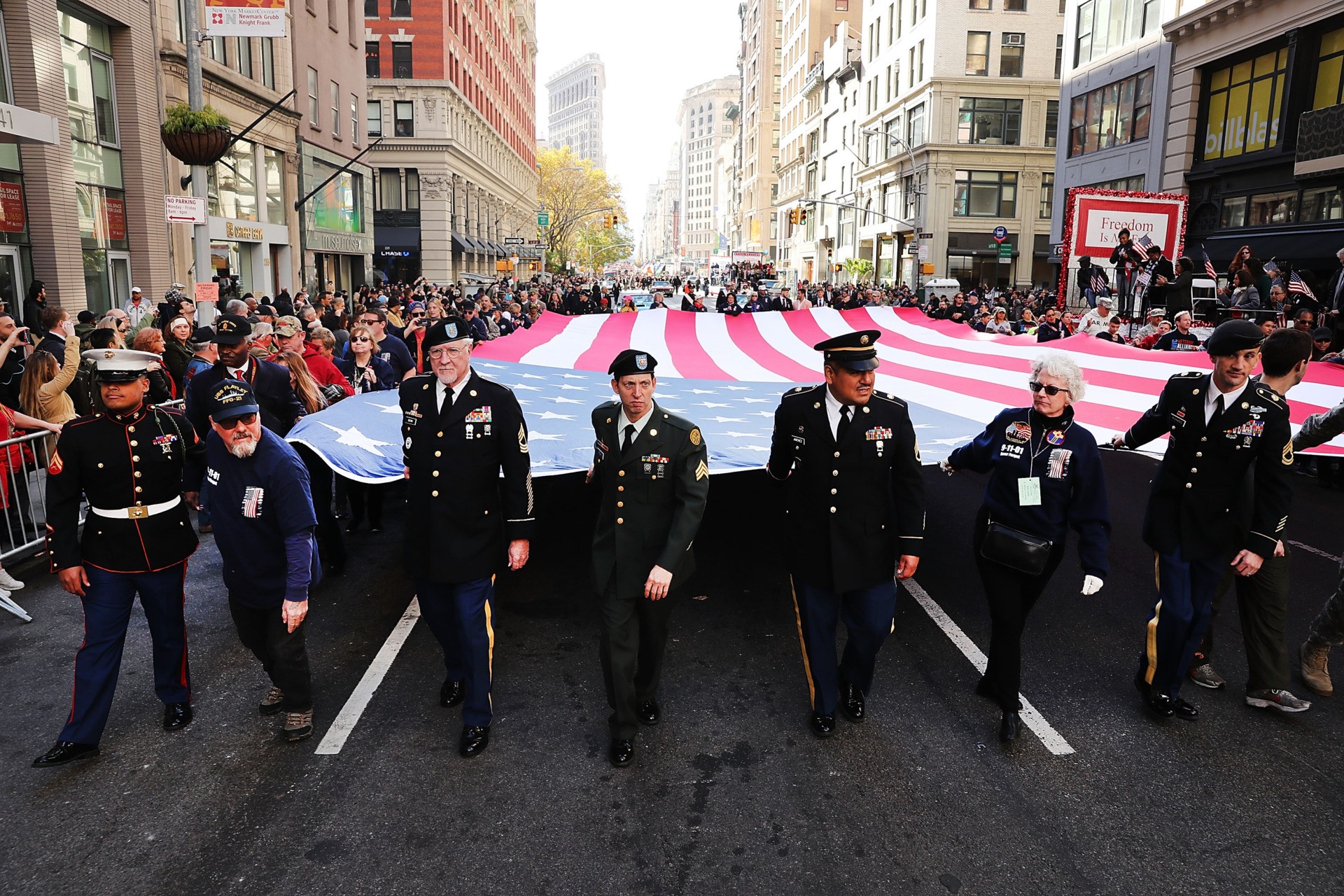 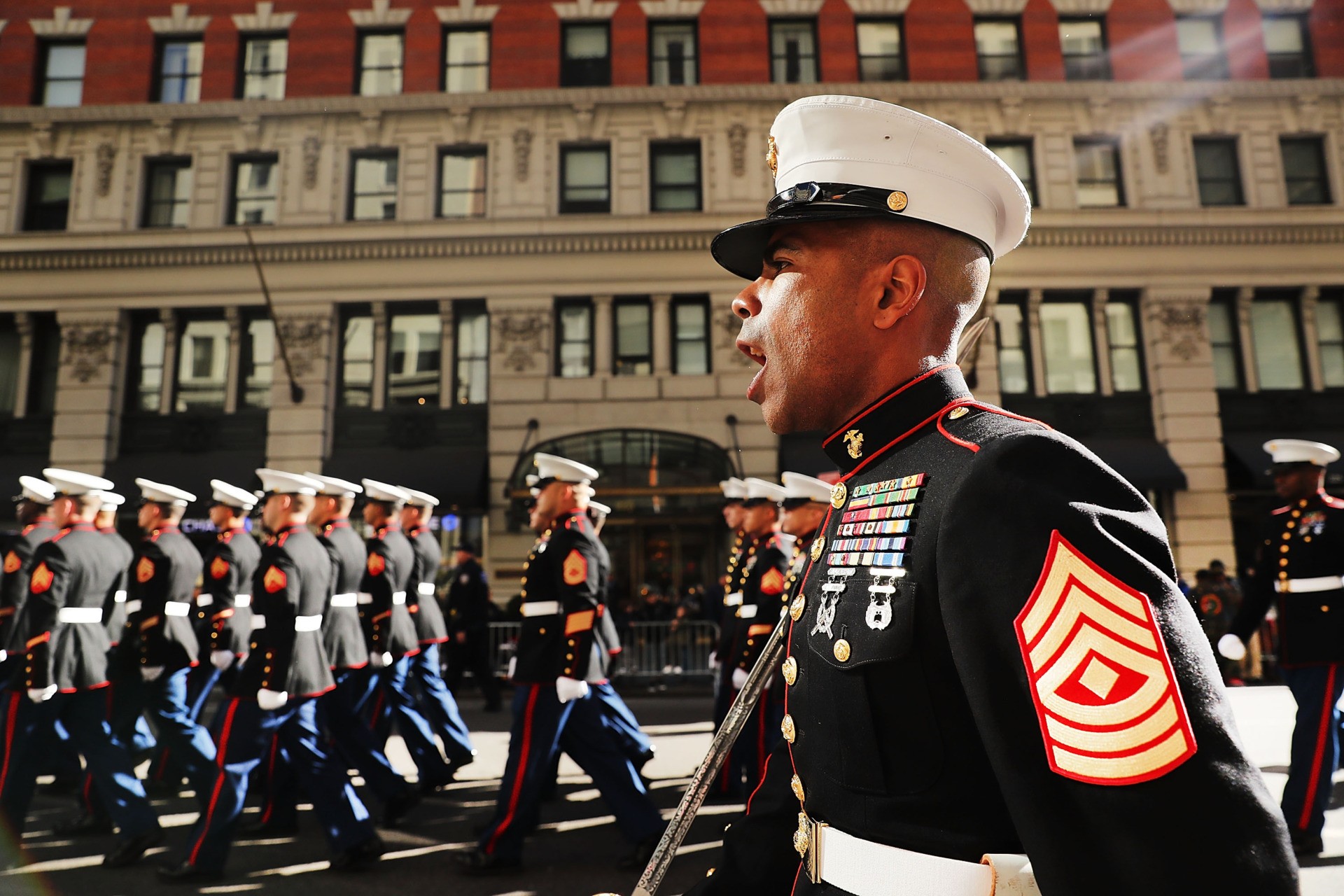 Members of the U.S. Marines march in the Veterans Day Parade in New York City on November 11, 2016. (Spencer Platt/Getty Images) 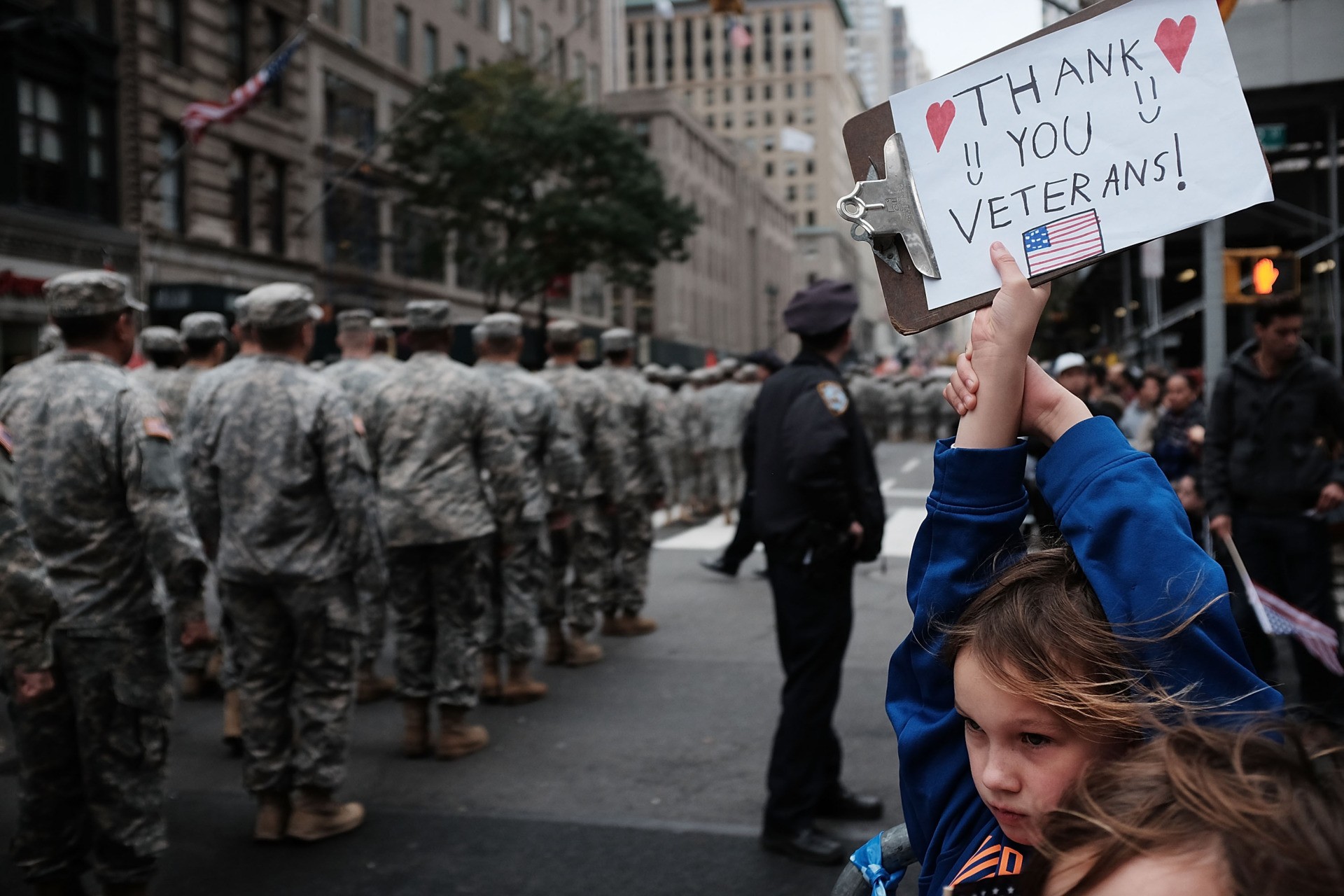 Another American caught up in that same spirit of consciously shaping patriots was Noah Webster. These days, Webster is best known for his dictionary, and yet back in 1785 he published a school textbook, An American Selection of Lessons in Reading and Speaking, featuring patriotic writings and speeches from George Washington and other heroes.  The book enjoyed some 77 printings over the next few decades; in some editions, the title page featured this quote on the importance of educating the young to be patriots: “Begin with the infant in the cradle; let the first word he lisps be Washington.”

Yes, today, we must actively teach the young to be good patriots; if we fail to do so, they could end up like too many in Austin.

Indeed, strong patriotic education isn’t just a nice thing; it’s an essential thing. As Winston Churchill—whose mother was an American—declared of patriotic public instruction, “A love for tradition has never weakened a nation, indeed it has strengthened nations in their hour of peril.” Churchill said those words in 1944, during the middle of World War Two. In that war, as in every war, we are reminded that we need the bravery and the sacrifice that comes from patriots.

And speaking of 1944, the year of D-Day, we might recall that the opening scene of the film Saving Private Ryan—before the hellish scenes of the bloody landing at Omaha Beach—starts with an American flag.

So who, today, will teach Americans about patriotism? About the true meaning of Veterans Day? We know all too well what the other side is doing; we know, for instance, about The New York Times’ dishonest and divisive 1619 Project, which has now worked its way into many school curricula, where it has joined with Critical Race Theory.

Fortunately, the voters are rejecting CRT, as they did in Virginia earlier this month. And yet we must do more than just say “no” to bad lessons; we must say “yes” to good lessons. We need a better, brighter vision. So where can we look? To whom?

One such aid is the work of William Damon, a professor of education at Stanford and a fellow at the conservative Hoover Institution. Last year, he authored How to Educate an American: The Conservative Vision for Tomorrow’s School, which includes this pertinent point:

To acquire civic purpose, students need to care about their country. As a foundation for citizenship education, schools should begin with the positive and emphasize reasons for caring enough about our society to participate in it and try to improve it.  In this way, American students and those who teach them can share civic purposes energized by a motivating spirit of patriotism.

If we were to follow Damon’s example—and the guidance of others who share his views—we’d have schoolbooks that give young Americans “civic purpose” and a “motivating spirit of patriotism.”  And if the young gain those positive traits, we’d have Americans who, when duty calls, will go rushing to defend the flag and the republic for which it stands.

And so we come back to Veterans Day. We owe the soldiers of the past for their brave and stalwart service.  And yet as we look ahead to an inevitably stormy future—sadly, we haven’t seen the last war—we realize that paying our debt to the past is actually the best investment we can make for a secure future.

Because is the soldier who keeps us free. 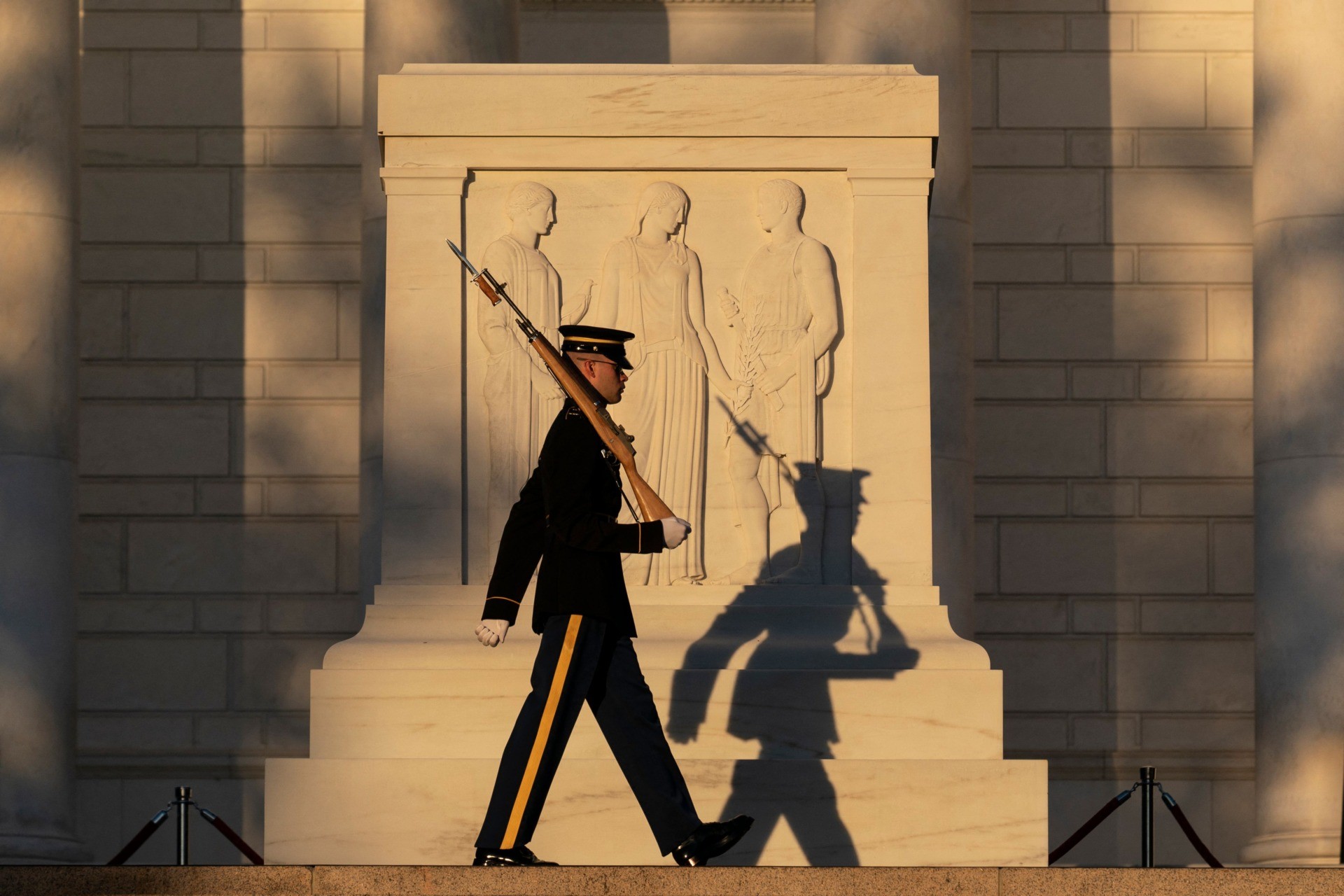 A tomb guard of the 3rd U.S. Infantry Regiment, known as “The Old Guard,” walks before a centennial commemoration event at the Tomb of the Unknown Soldier in Arlington National Cemetery in Arlington, VA, on November 9, 2021. (Alex Brandon/AFP via Getty Images)