Virginia parents gained a huge advantage in their battle to keep racial and transgender advocacy out of K-12 classrooms by voting Republican Glenn Youngkin into the governor’s office.

The alliance with Youngkin arrived quietly on May 31, when he reacted to the firing of Tanner Cross, a PE teacher in Loudoun County who cited science and Christianity when refusing to use the school district’s pro-transgender pronoun policy:

As governor, I will stand for excellence in education. We will not teach critical race theory and I will stand up for teachers and parents against these kinds of canceled culture initiatives, and, by the way, who’s standing up for Tanner Cross?

Loudoun County — a solidly Democratic district — swung nine percentage points towards Youngkin amid worries from white-collar and blue-collar parents that their children were being subordinated to teachers’ enthusiasm for racial “equity” and transgender advocacy.

25% of them viewed the [Critical Race Theory] CRT debate as the single most important factor they considered when deciding who to support for governor. Of the quarter of voters who labeled CRT the most important issue, 70% supported Republican candidate Glenn Youngkin and 29% supported the former Democratic Gov. Terry McAuliffe.

Overall, 72% of Virginia voters said CRT was an “important” factor in their vote while 28% said it was not important.

The Democrats’ push to establish transgenderism in schools also spurred turnout in many red districts. For example, Youngkin gained an eight-point swing in solid-red Rockingham County in the state’s semi-rural Shenandoah Valley.

On October 29, a polling firm showed Youngkin had a 15-point lead among parents with kids in school.

GOP leaders normally focus their emotion and advocacy on the needs of business owners. But Youngkin’s alliance with parents is raising the GOP’s willingness to oppose the Democrats’ establishment radicalism.

But the battle is far from over. Republicans appear to have gained a one-seat majority in the state House, but the Democrats can still use their Senate majority to stymie legislative reforms. Moreover, President Joe Biden’s federal officials, far-left judges, and progressive reporters will fight back wherever parents push their school boards to restore standards and color-blind education.

Glenn Youngkin Vows Ban of CRT on Day One: "We Will Not Be a Commonwealth of Dream Stealers" pic.twitter.com/mHVvJ7SK65

The suburban political shift in Virginia was entwined with extensive coverage of the grassroots opposition to teachers’ radical enthusiasm. The coverage was provided by Breitbart News and other mainstream outlets, even as establishment outlets tried to hide the drama.

On May 18, for example, Breitbart reported on a scoop about a secret CRT program in nearby Albermarle County:

In 2019, the Albemarle County, Virginia School Board unanimously voted to adopt a radical “anti-racism” policy aimed at “building the racial consciousness” by requiring children to deconstruct their racial and sexual identities and “understand that anti-racism is an action” for which they have a “personal responsibility.” Breitbart News has obtained access to the County’s pilot curricula, which the County has attempted to keep secret from parents.

The Virginia results were echoed in New Jersey and New York’s Long Island, where a wave of suburban voters ejected many Democrats from local offices. In other states, grassroots movements took school boards back from radical-minded Democrats.

Several GOP-linked advocacy groups spent heavily to spotlight the transgender and CRT issue in Virginia, including the American Principles Project. The group’s political action spent $1 million in the campaign:

Virginians have a choice to make next Tuesday — Between politicians who will protect our daughters in their most private spaces or those who will not.

My organization has long argued that the Republican Party needs to treat families as its main constituency, and that cultural issues are winning issues. The Left’s woke agenda is deeply unpopular among the majority of Americans. Fighting back against that agenda is appealing to every single group that Youngkin needs to win. It’s firing up the base, and it’s tapping directly into the concerns of much-discussed suburban voters. (Suburban Loudoun County, before becoming the epicenter of the school controversy, voted for Biden in 2020 by a 25-point margin.) It’s also appealing to working-class voters across all demographics.

Yet, despite the obviousness of cultural conservatism’s electoral potency, very few high-profile Republicans have been willing to stake their campaign on it—until now. Glenn Youngkin deserves credit for emerging as an advocate for the American family and, in turn, finally requiring the Democrats to stand in the spotlight and defend their radical agenda to rip apart education, the economy and the family alike.

APP PAC completed a nearly $1 million campaign in Virginia to educate voters about the anti-family agenda of Democrat Terry McAuliffe.

Here are some of the highlights 👇 pic.twitter.com/wAfg1Y00Yw

Fights over transgender rights or critical race theory — or, as in Fairfax County, the decision to ban some LGBTQ-themed books, based on their LGBTQ or adult content, or outrage over a survey that asked middle and high school students questions about their personal identity or family life — have fueled an increased in support for Youngkin and other Republicans. In September, the Republican-led Stafford County Board of Supervisors passed a resolution condemning the alleged inclusion of “critical race theory” in schools and preventing teachers from asking students their pronouns, threatening to potentially defund specific projects or initiatives involving critical race theory, racism, or transgender rights.

But Youngkin also made sure to distance himself from President Donald Trump, so enabling him to win more votes from comfortable upper-middle-class people. The Washington Post reported November 3:

Laurel Wise, 48, a Henrico County resident and former college administrator, said Youngkin became more palatable to her by signaling that he did not want to appear alongside Trump.

“Believe me, if there had been any association, I’d be pulling the blue lever today,” she said.

Referring to her choice of Youngkin, she described herself as feeling “a little dirty.” 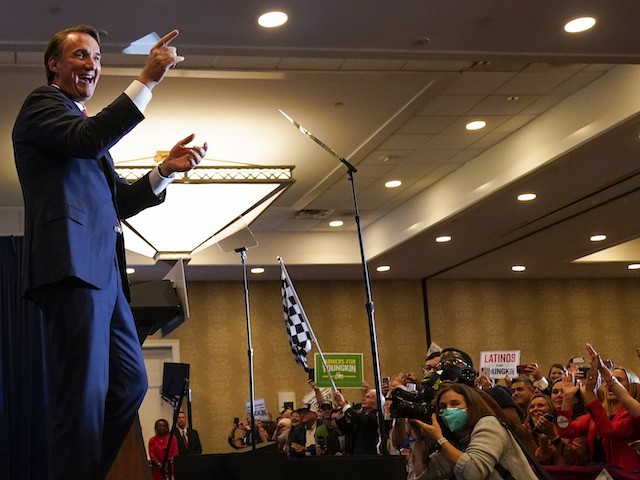