The economic logic is correct; More immigration will flood the labor market, so shrinking wages, so reducing the cost of many items, including food and services.

But the vast majority of the benefits would go to wealthy investors and employers — not to the ordinary Americans who might be able to get slightly cheaper groceries as they watch their wages shrink in value.

“The larger crisis in the U.S. labor market is [not a lack of immigrants, but]… the dramatic decline in work among working-age people for the last 50 years,” said Steve Camarota, research director at the Center for Immigration Studies. “If you look at prime-age men, from the time I was born in 1964 to the present, you have basically an uninterrupted 60-year decline” in the share of men who are working, he said.

BiDEN'S AMERICA: As inflation soars in the Biden economy, working class Americans are struggling to be able to pay for groceries. So, naturally, China Joe has big plans for them. https://t.co/ZIB3FDBIGG

That share began rising amid President Donald Trump’s low-immigration policies — but then crashed when the coronavirus hit the economy, he said.

Yet many D. C. lobbies and advocates want to shield wealthy investors from inflation by sacrificing the wages of ordinary Americans.

“In the past week, we learned that these [employee shortages] shortages led to the largest year-on-year increase in inflation in over 30 years,” claimed two advocates at the Brookings Institution. “Some of these front-line jobs could be filled from the vast pool of [migrants] … This would help relieve the supply chain pressures currently hampering growth, calm inflation.” 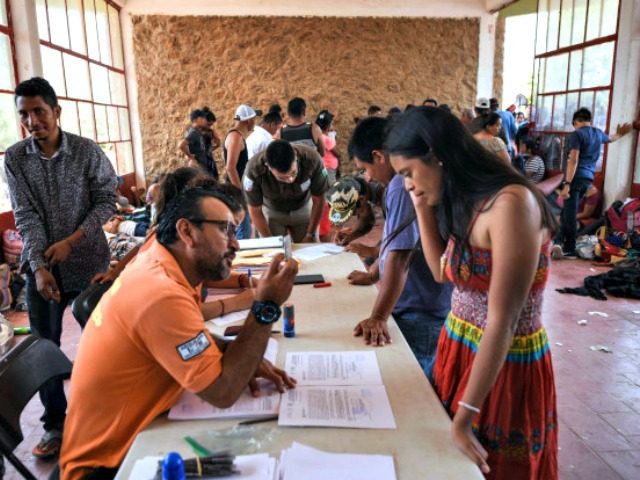 More immigration will flood the labor market, so shrinking wages, so reducing the cost of many items, including food and services. (Image via AFP)

Some advocates are calling for more migration while also claiming the extra labor supply will not cut wages. “Allowing more working-age immigrants to enter the U.S. can reduce prices without depressing economy-wide wages,” said Eric Levitz, a pro-migration writer at New York Magazine.

But business — including Wall Street — believes that migrants cut wages, and even Biden’s White House officials admit the trade-off.

So Democratic legislators are more careful as they pitch the same migration-cures-inflation pitch.

“If they’re concerned about inflation, as we all are, then we want to get productivity back up.”

Inflation is running hotter than expected amid ongoing supply chain disruptions and a shortage of semiconductors, the chief financial officer of 3M said Monday. https://t.co/NXtqFnOYGM

On November 14, Treasury Secretary Janet Yellen seemingly rejected the cut-wages-to-reduce inflation that was proposed to her by CBS’ interviewer on “Face The Nation”:

There are a lot of issues involved in immigration, but that — I believe that is one reason that we do face supply shortages — shortages of certain kinds of workers … I mean, we’ve long had a problem of more jobs available for skilled workers and declining opportunities for less skilled workers. So focusing on education and training [for Americans] was important and continues to be.

“Labor supply has been impacted by the pandemic — [American] labor force participation is down; it hasn’t recovered,” she noted.

Nonetheless, Biden and his deputies are arguing that his $1.7 trillion Build Back Better bill will reduce inflation by eventually increasing the productivity of U.S. workers.

But that bill would allow government and business executives to also import millions of new workers and consumers who will reduce productivity and drive down wages while also spiking inflation in housing prices.

A columnist at Bloomberg.com noted November 21 that the big-spending bill is not intended to curb inflation:

The truth is that the Democrats aren’t pursuing this spending bill in the spirit of meeting a pressing national objective. They’re just trying to cram as much of the progressive agenda as they can get through Congress before Republicans can end their control of it in the next election. That’s not the kind of advertising pitch likely to work on the public, though. And so we have ended up with the president pretending that this bill is his big idea to whip inflation.