“She could not have been more wrong,” Dr. Christie asserts. “A growing body of scientific evidence indicates that a fully developed cortex is not necessary for the transmission of pain sensations, which may be present as early as 12 weeks.”

Physicians “routinely protect their youngest patients — fetal and premature — from pain,” states Christie, a Senior Fellow for The Catholic Association. “A baby born at 21 or 22 weeks receives anesthesia routinely during any intervention. Anything less would be considered barbaric.”

“The same goes for fetal surgeries performed in the second trimester, in which the fetus is removed from the uterus, anesthetized and operated on, and then returned to finish growing inside her mother,” she adds.

Together with two other female physicians, Dr. Christie submitted an amicus brief to the Supreme Court last July detailing advances in fetal science that have happened since 1973, many of which seem to completely elude Justice Sotomayor. 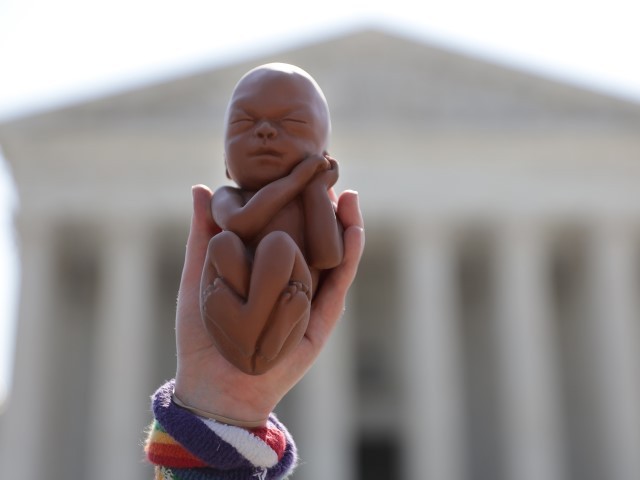 WASHINGTON, DC – JUNE 22: A pro-life activist holds up a model of a fetus during a protest in front of the U.S. Supreme Court June 22, 2020, in Washington, DC. The Supreme Court is expected to issue a ruling on abortion rights soon.

The 36-page brief documented technological advances in embryology, such as vastly improved ultrasound imaging, that have enabled doctors to gain a much clearer understanding of fetal development in utero.

“Whatever doubts existed in 1973 about the humanity of the fetus (and embryo) or its being ‘alive’ from the moment of conception have been put to rest,” Christie asserts.

As a matter of scientific fact, the distinct DNA profile of an embryo and its self-directed development “are clear biological markers for human life, and are recognized as such by biologists and physicians worldwide,” she declares.

In her cringeworthy oral argument, “Justice Sotomayor paraded her scientific ignorance even further, callously comparing a fetus recoiling from pain to the muscle reflex of a brain-dead patient,” Christie states.

With all the information readily available, it’s a shame that in a landmark case, “a Supreme Court Justice would stick to outdated science and withered old misconceptions,” she concludes.