Georgia has the most secure election practices of any state following its passage of a sweeping election integrity bill, according to a scorecard published Tuesday by the Heritage Foundation.

The influential conservative think tank weighed a dozen factors it considered “essential” to election integrity to compile the scores, and coming in in the top five were all southern states with Republican-controlled state legislatures and Republican governors.

The bottom five states, all deeply blue states with the exception of Nevada, were:

Georgia’s ranking comes after the state has been at the center of the national debate over election laws and concerns with voter fraud stemming from the 2020 election.

Georgia was a key battleground in 2020 where Democrats achieved stunning victories on razor-thin margins in the presidential race and in the subsequent dual Senate runoff races, which were to determine which party would have control of the upper chamber in Washington.

The state had been one of many to modify its voting procedures before the elections to both accommodate concerns about surging cases of coronavirus and to appease lawsuit-happy Democrats who seized on the virus as a means to pursue their pre-pandemic goal of loosening voting restrictions and inserting the federal government into states’ election processes.

In Georgia, Secretary of State Brad Raffensperger (R) in conjunction with the State Election Board implemented a series of changes to the voting process ahead of the primaries and general election, which resulted in an unprecedented influx of absentee ballots. Those changes on the backdrop of a broader Democrat push to expand voting access by loosening regulations drove initial Republican concerns of the potential for widespread fraud.

The concerns in the Peach State deepened following the Democrat wins and former President Donald Trump — who had come up about 12,000 votes shy of President Joe Biden in his race after two recounts and amid dozens of investigations into voting irregularities — repeatedly denouncing the election as “rigged.” 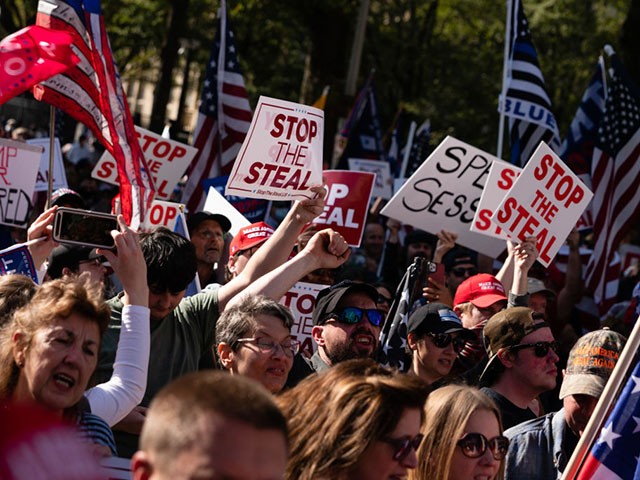 Protesters rally outside the Georgia State Capitol during a “March for Trump” protest against the results of the 2020 presidential election on November 21, 2020 in Atlanta (Elijah Nouvelage/Getty Images).

Trump ultimately pointed to Gov. Brian Kemp (R) as blameworthy for the Republican losses because he deemed Kemp complacent and wanted the governor to call a special session for the state legislature to select its own separate set of electoral college electors, a request Kemp declined because he said it would be unconstitutional and “immediately enjoined by the courts.”

Kemp still however publicly expressed shared frustration with Trump over the 2020 election process and answered the concerns of fraud by signing an omnibus election integrity bill into law in March, which tightened voter ID requirements, regulated the number of ballot drop boxes, eliminated the 2020 practice of mailing unsolicited absentee ballot applications to registered voters, and more. 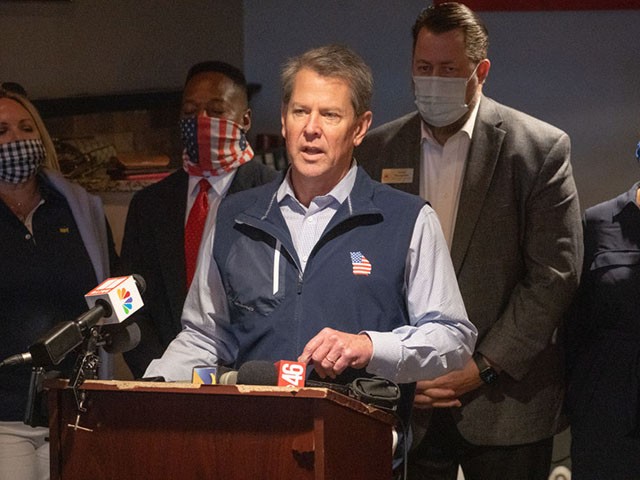 Gov. Brian Kemp speaks at a news conference about the state’s new Election Integrity Act that passed this week at AJ’s Famous Seafood and Poboys on April 10, 2021, in Marietta, Georgia. (Megan Varner/Getty Images)

The bill was widely praised by Republicans as a productive step toward addressing voter fraud concerns but denounced by Democrats and some corporations, who claimed concerns of fraud were unfounded and that the bill amounted to voter suppression of racial minorities.

The Heritage Foundation’s sister organization, Heritage Action, which was invested in seeing the bill through the legislative process, praised it in March as a means to “protect Georgia’s votes and make the state a model for the rest of the country.”

In the foundation’s latest election integrity initiative — the release of the scorecard — the think tank said it consulted election law experts in every state and calculated states’ election integrity score by assigning points for the following 12 areas:

Heritage Action executive director Jessica Anderson described the scorecard as a “roadmap” for the group’s “two million grassroots activists” as they pursue election reforms across the country in the leadup to the 2022 midterms. 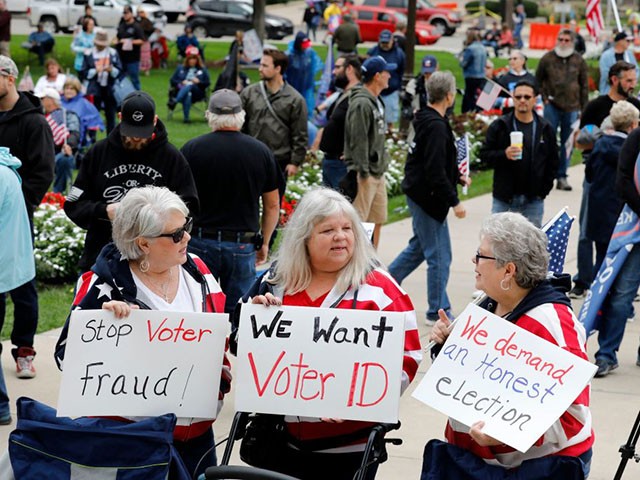 Protesters call for a “forensic audit” of the 2020 presidential election during a demonstration by a group called Election Integrity Fund and Force in Lansing, Michigan, on October 12, 2021 (JEFF KOWALSKY/AFP via Getty Images).

As for Georgia’s ranking on the scorecard, Kemp responded to his state’s achievement with a statement of his own, saying, “As Secretary of State for nine years and now as Governor, I am proud to lead the fight to ensure Georgia’s elections are secure, accessible, and fair.”

Kemp also took a jab at those who had publicly rejected his overhaul bill, the most prominent of such rejecters being Major League Baseball (MLB), which pulled its All-Star Game from Atlanta this year to protest the election bill. MLB’s decision backfired after it deprived the state of tens of millions of dollars in anticipated revenue as the game saw its second-lowest ratings on record.

“While woke activists and far-left liberals tried to cancel our state for standing up for common-sense measures like ID requirements for absentee ballots and secure drop boxes, Georgia Republicans stood strong for election integrity and this ranking shows it,” Kemp stated.

Kemp’s efforts, however, have not satisfied Trump, who has maintained his stance on Kemp since the election, continuously deriding the governor as a “RINO” and “weak” and primarily responsible for the 2020 Republican defeats. 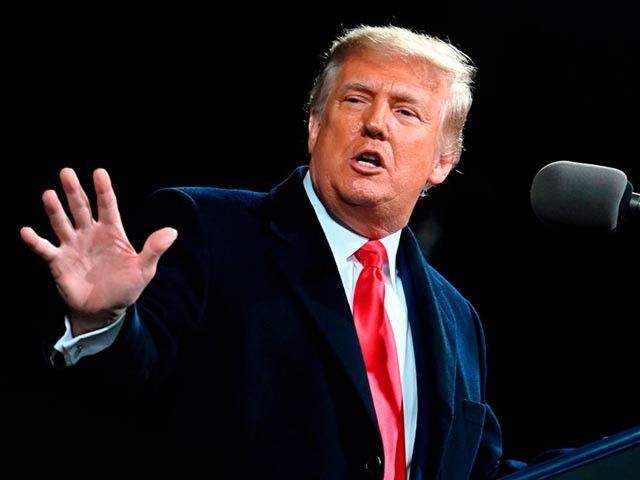 President Donald Trump gestures as he speaks at a rally for Republican Senate runoff candidates at Valdosta Regional Airport in Valdosta, Georgia, on December 5, 2020 (ANDREW CABALLERO-REYNOLDS/AFP via Getty Images).

Kemp is now facing a gubernatorial primary challenge from former Sen. David Perdue (R-GA), one of the two Republicans who lost in the runoffs and who has since fallen in line with Trump’s position on the election. Perdue, who quickly garnered Trump’s endorsement upon announcing his campaign last week, told Breitbart News Saturday this past weekend that he decided to run for governor “against an incumbent Republican governor who I think gave away the election process to Stacey Abrams in 2020 and has lost confidence of our party.”

Perdue pointed to Abrams, the Democrat activist who narrowly lost to Kemp in 2018 and who is now running for governor again, as his motivation to step into the race as Abrams has become a formidable public figure with proven fundraising abilities. Perdue said of Kemp, “I just don’t see any way that he can beat Stacey Abrams.”