American parents are overwhelmingly concerned with what is being taught in schools and believe schools have gotten political over the last two years, according to a survey conducted by Free to Learn (FTL).

Overall, 81 percent of Americans are concerned with the quality of education today, with 59 percent concerned specifically with what their children are learning, and 66 percent believing schools have become more political since the pandemic’s debilitating lockdowns.

The same survey showed a majority of American parents having seen negative outcomes from virtual learning, including the state of their child’s academic achievement (55 percent) and mental health (60 percent). More than half of those surveyed, 52 percent, said they became more involved with their child’s curriculum as a result of virtual learning. 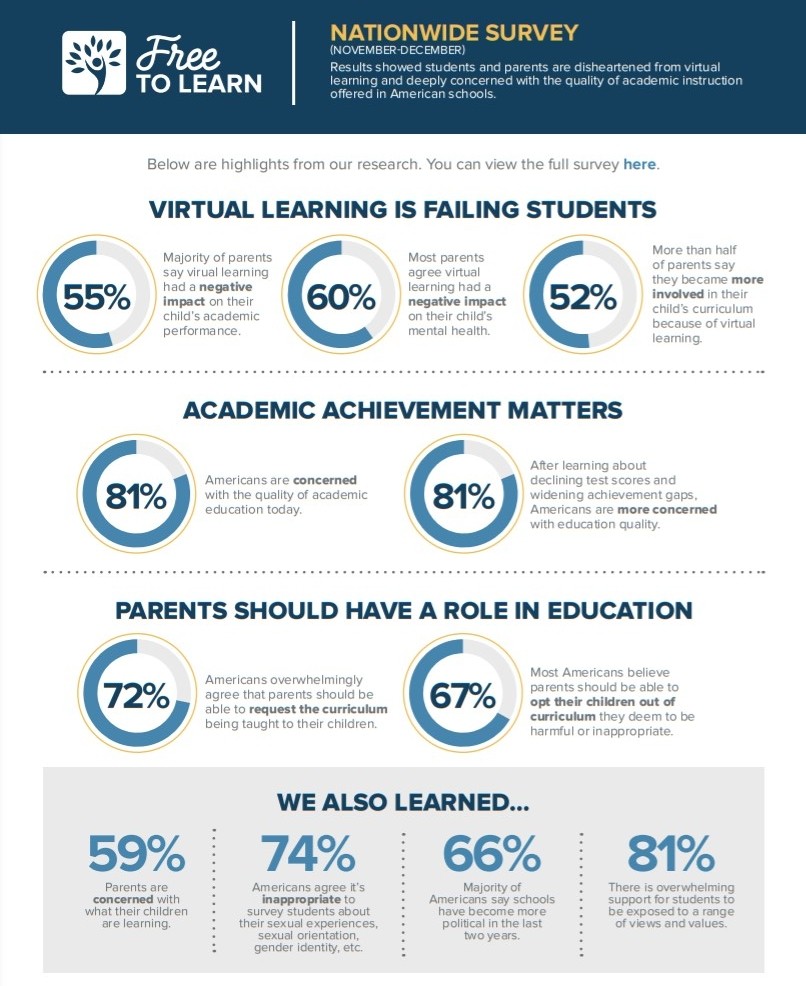 While the survey found that 81 percent of respondents were concerned about the quality of academic education, 48 percent said they are “very concerned.”

“Despite the unending push by your organizations to de-emphasize academic achievement in the name of activism,” Marré said, “there was overwhelming consensus in our research that American families are extremely concerned with how K-12 schools are performing.”

An overwhelming majority of parents also believe they should have the ability to request the curriculum being taught to their children from the school (72 percent) and opt their child out of a program they deem inappropriate or harmful (67 percent).

“I hope this data helps make clear that those students’ parents are not some disembodied, disinterested group to be ignored, nor are they domestic terrorists against which to fight.” Free to Learn Coalition President @AlleighMarrehttps://t.co/JIQ5q9j9At

“From Covid to culture wars,” Marré began her letter, “the education of students across the United States has been turned upside down over the last two years.”

Describing how their organizations have contributed negatively to the state of education, Marré said, “Even as teachers work tirelessly to meet the real, concrete needs of their students, the so-called professional organizations are instead focused on activism, control, and political influence.”

“While your immediate constituency may be teachers and School Board members, those individuals are public servants,” she continued:

Advising those same public servants to engage with their communities through the lens of activism and politics, while strongarming them to ignore the wishes of those most invested in students’ futures, has contributed mightily to the dissatisfaction we see across the country.

Marré cited Fairfax County, Virginia’s, sharp enrollment drop so that the education organizations might “understand the gravity of this loss of confidence in your leadership.”

As Breitbart News reported, according to the Virginia Department of Education, “overall, enrollment has fallen by more than 46,000 students since 2019, a nearly four percent drop since the beginning of the coronavirus.”

While enrollment has dropped in Virginia, staffing has declined as well, with the number of “unfilled education positions have increased 62 percent.”

“It is my sincere hope that you’ll see this polling data not as a threat but as insight that will help focus your efforts to best serve our nation’s students,” Marré concluded.