Michigan Gov. Gretchen Whitmer (D) imposed some of the most aggressive coronavirus orders of any governor on her residents as cases began surging last year, but in 2021, the Democrat governor repeatedly failed to follow her own guidance.

Whitmer’s various transgressions, such as violating her own restaurant capacity mandate and traveling to Florida and then discouraging travel, occurred in the wake of a slew of stringent mandates she implemented in 2020 and 2021.

Whitmer’s executive orders began in spring 2020, when she locked down her state almost entirely, shuttering schools and businesses and prohibiting people from leaving their homes except for “necessary” reasons like exercising and grocery shopping.

In June 2020, more than two months after her initial orders were implemented, she lifted some restrictions but slow-walked allowing businesses to open at full capacity. On top of closures and restrictions, Whitmer also issued a strict mask mandate in July 2020, requiring everyone over the age of four to cover their faces when inside public spaces or outside and unable to maintain distance from others.

Not until June 2021, more than a full year after her initial orders, did Whitmer rescind her remaining capacity and mask mandates.

Meanwhile, polling in the first half of 2021 reflected increasingly negative perceptions of the governor. An EPIC-MRA poll conducted in February found Whitmer had “slipped in terms of favorability,” the Detroit Free Press reported. An MRG poll conducted in March found the same. A Detroit Regional Chamber poll conducted at the end of May showed nearly an eight-point drop in approval for Whitmer compared with its previous poll from February.

The sacrifices Whitmer forced Michiganders to make did not result in her state controlling virus cases relative to other states. As coronavirus mandate fatigue seemingly took hold in early 2021, a New York Times headline read, “Michigan’s Virus Cases Are Out of Control, Putting Gov. Gretchen Whitmer in a Bind.”

One side of the “bind” she faced came in the form of public pressure from protests, small businesses openly bucking orders, and headlines continuously highlighting Whitmer’s inability to follow her own rules.

In May, the Republican National Committee featured Whitmer at the top of its “rules for thee, but not for me” report, listing out examples of Whitmer following the “do as I say, not as I do” adage. In September, the conservative Michigan Freedom Fund released a “‘rules for thee, but not for me’ playbook” listing out “20 brazen acts of hypocrisy” from Whitmer. Another outspoken group highly critical of Whitmer, Michigan Rising Action, posted a Twitter thread in December of “Whitmer’s most glaring instances” of hypocrisy, contending that “Michigan Democrats cemented themselves as the ‘rules for thee, not for me’ party this year.”

Five such moments prompting backlash against Whitmer that relate to coronavirus are below.

1. Attending President Joe Biden’s inauguration — Whitmer, who served on Biden’s presidential inaugural committee, left her state and attended the January 20 event in Washington, DC, with roughly 2,000 other people, as first reported by the Washington Free Beacon. The event did not align with Whitmer’s orders she had in place in her own state in which she prohibited average Americans from attending outdoor events with more than 25 people, regardless of distancing or masking. Whitmer responded to the criticism by saying, “I have been following the same directives I’ve asked everyone else to. I can’t stand those people that have one rule for others and a different one for themselves.”

2. The Florida private jet scandal — An unvaccinated Whitmer quietly flew to Florida in early March and, less than one month later, urged spring breakers to avoid travel to Florida specifically. Whitmer eventually admitted to the trip in April, saying she left the state to tend to her father’s health needs and that she worked as governor remotely while there. The mysterious trip, however, prompted a range of questions — many of which remain unaddressed — about the suspicious source of funds for the trip, the true necessity of the visit, and the reason she continued working as governor, which may have conflicted with the Michigan Constitution.

3. Whitmer aides going on out-of-state vacations — In April, both Whitmer COO Tricia Foster and Department of Health and Human Services Director Elizabeth Hertel traveled out of state to Florida and Alabama, respectively, which conflicted with their administration’s guidance. While no hard travel ban was in place at the time, just before her Alabama trip, Hertel’s department issued an advisory recommending Michiganders do not travel unless it was “unavoidable” and to not travel at all if they were not fully vaccinated. Hertel was not fully vaccinated at the time of her trip.

Whitmer dismissed reports about the trips, calling them “partisan hit jobs.” She said, “There have never been travel restrictions in Michigan. There just haven’t been.”

4. Violating Michigan’s restaurant capacity order — In a since-deleted Facebook photo first obtained by Breitbart News, Whitmer was seen smiling with 12 other people, including Foster, at a table at the Landshark bar in East Lansing in May. At that time, Whitmer had limited food service establishments to a maximum of six people per table. The photo was shared by a multitude of media outlets, forcing Whitmer to issue a response in which she apologized for the violation. 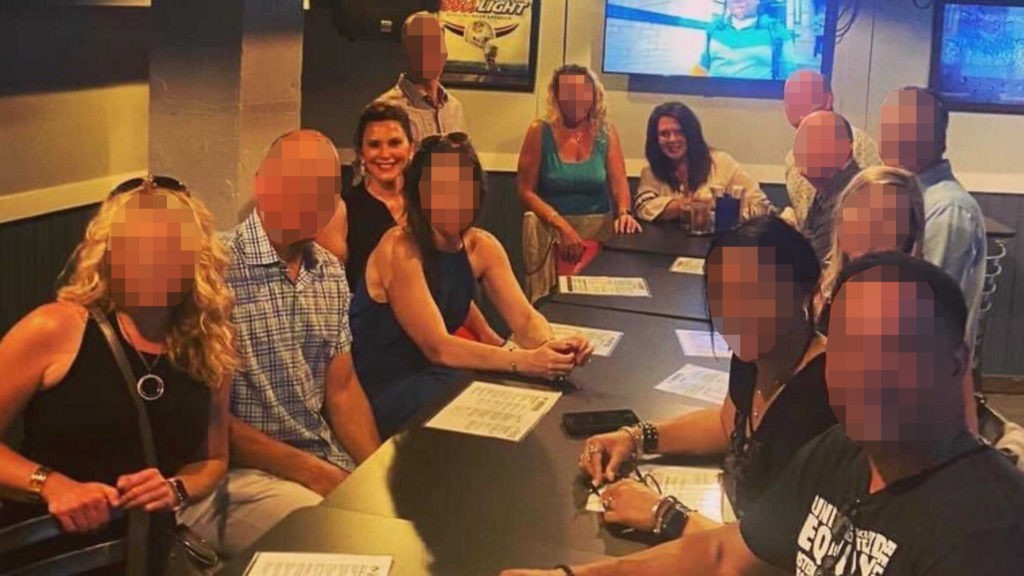 “Because we were all vaccinated, we didn’t stop to think about it,” Whitmer said. “In retrospect, I should have thought about it. I am human. I made a mistake, and I apologize.”

5. Bucking the mask mandate at a bar in D.C. — Whitmer flew to D.C. at the end of October to meet with “key-decision makers” about “Michigan priorities” and had also planned to door-knock for Virginia Democrat gubernatorial candidate Terry McAuliffe while there. After Whitmer canceled her McAuliffe plans last minute, however, a photo surfaced of Whitmer mingling maskless the night before the canceled event at the posh Vue bar, in violation of Mayor Muriel Bowser’s (D) mask mandate.

The Beacon, which first reported on the photos, reported that Whitmer was not actively eating or drinking while maskless and that “several individuals standing near the governor were wearing masks.”

before bailing on a campaign event for @TerryMcAuliffe on Saturday, @gretchenwhitmer was spotted maskless at a swanky bar in D.C. Friday night, as seen in photos sent to the Free Beaconhttps://t.co/odgm1JqRMM