Michigan Gov. Gretchen Whitmer (D) was spotted maskless at a swanky bar in Washington, DC, on Friday, the day before she skipped out on a campaign event for former Virginia Gov. Terry McAuliffe (D), according to photos that emerged this week.

The photos, obtained by the Washington Free Beacon, show Whitmer mingling at the pricey Vue rooftop bar at the Hotel Washington without wearing a mask, a violation of D.C. Mayor Muriel Bowser’s (D) indoor mask mandate.

The bar, located right by the White House, has large windows but is enclosed and requires its customers wear masks when they are not actively eating or drinking. The Beacon noted that “Whitmer was not doing either while maskless. Several individuals standing near the governor were wearing masks.”

before bailing on a campaign event for @TerryMcAuliffe on Saturday, @gretchenwhitmer was spotted maskless at a swanky bar in D.C. Friday night, as seen in photos sent to the Free Beaconhttps://t.co/odgm1JqRMM

Whitmer had planned to knock on doors in Arlington County, Virginia, on Saturday on behalf of McAuliffe — who is neck and neck with Republican Glenn Youngkin in the race for Virginia governor — but the Michigan Democrat had a “schedule change,” Whitmer’s campaign spokesperson told the Detroit News on Saturday.

Whitmer’s cancelation came after multiple Michigan Republican groups lambasted the Democrat governor for leaving the Great Lakes State while the small city of Benton Harbor, Michigan, is in the midst of a lead water crisis.

Michigan Republican Party Communications Director Gustavo Portelo wrote upon learning of the planned Virginia event, “People literally don’t have access to clean and safe water but she has time to campaign for @TerryMcAuliffe? Dereliction of duty.” 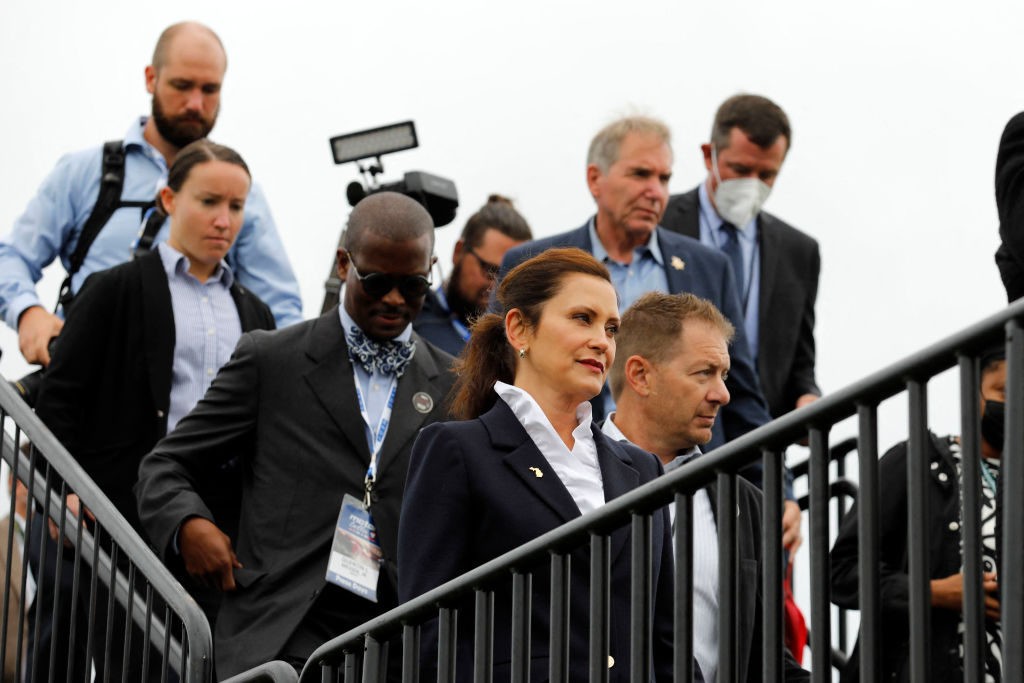 Before her spokesperson noted the “schedule change,” the governor’s office on Friday also issued a brief statement saying the governor had been in D.C. last week having “high-level conversations” with “key decision-makers” about “Michigan’s priorities.”

Whitmer gained a reputation last year for her strict coronavirus policies when cases began surging, but her reputation suffered, per polling, as she repeatedly came under fire for violating her own orders. In one instance, the governor quietly chartered a private jet to Florida so she could visit her father just before warning spring breakers not to travel. The governor was also caught in May at a dive bar with a large group and was forced to apologize for directly violating her own capacity mandate.

Whitmer’s office did not respond to a request for comment from Breitbart News about the new maskless photos of her.