The Round Rock, Texas, school board, which has made headlines for having its own armed agents arrest parents in their homes, is holding a closed-door meeting to consider the future of its superintendent.

Superintendent Dr. Hafedh Azaiez is under investigation for claims of assault and has also been accused of using Round Rock Independent School District’s police force to silence citizens critical of school board policy.

Azaiez, who was hired in June 2021 on a three-year contract at $350,000 a year, was recommended to be put on administrative leave in a December 15 memo to school board president Amy Weir “pending the outcome of an investigation regarding the underlying conduct found in a protective order issued by a Travis County District Court,” according to KEYE Austin.

Weir, for her part, has been actively trying to silence not only parents in the ISD, but also two fellow board members — who happen to be conservative.

Indeed, after board members Mary Bone and Danielle Weston — who also sent out the press release containing the allegations against Azaiez — complained that the board was violating Texas law by not allowing many members of the public into the meetings, Weir added censure resolutions to the meeting agenda in order to “destroy our reputations and inflict financial pain,” according to Weston. The censure would also ban the conservative members from “visiting all Round Rock ISD properties in [their] official [capacities] as a Trustee without Board approval with the exception of Board Meetings.”

At the meeting Bone and Weston complained about, two fathers — Jeremy Story and Dustin Clark — were arrested for allegedly disrupting proceedings. Days later, the ISD’s own police force was sent to Story’s and Clark’s homes and arrested them there.

In August, while “produc[ing] evidence that the board had covered up an alleged assault by the superintendent, Hafedh Azaiez, against a mistress,” Story, a minister, was cut off midsentence as Azaiez ordered armed officers to remove him from the premises. 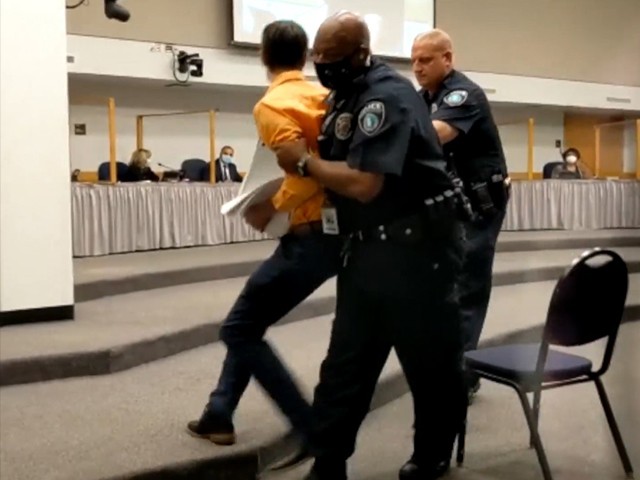 When Clark, a retired Army captain, sought to speak, the school board “locked the majority of parents out of the room, preventing them from speaking.” While the parents were asking the school board to open the room for public comment on a major policy item — a mask mandate — “school board president Amy Weir directed officers to remove Clark from school property.”

The closed-door meeting was set for 2:00 p.m. Monday, which Clark told Fox News “appears to be an effort to suppress parent comments by conducting a meeting during normal working hours which would exclude most parents and teachers in the community who would otherwise be at work.”