On the first anniversary of the January 6 Capitol protests, Rep. Andy Biggs (R-AZ) blasted the Democrats’ “one-sided and misleading narrative” of the event, deeming it “more detrimental to our republic than the day itself.”

“I condemn political violence, as I always have, including violence that took place on January 6, 2021,” he began. “Any act or speech that impedes constructive debate on the important issues facing our nation is a waste.”

“But the Democrats’ and the media’s one-sided and misleading narrative about the events, causes, and implications of that day are more detrimental to our republic than the day itself,” he added.

"There is no place for political violence in our society. But there’s also no place for the Democrats’ lies, cover ups, and witch hunts…"

Check out my official statement on the anniversary of Jan 6 below:https://t.co/AhYY6OXNwx

He then accused the “illegitimate” House select committee investigating the Jan. 6 U.S. Capitol riots of neglecting its very purpose while politicizing the event.

“Thus far, the illegitimate Committee created by Nancy Pelosi and Congressional Democrats to ostensibly investigate the events of January 6, has done nothing but attack President Trump and his supporters,” he said.

Claiming a “serious and legitimate inquiry” would have released the many hours of security footage from within the Capitol complex to reveal what actually occurred, Biggs suggested a professional committee would consider the following:

[W]hy was there a lack of training and equipment for law enforcement?

What role did Speaker Pelosi play in preventing law enforcement from having adequate personnel and material to protect the Capitol?

However, according to Biggs, the committee is merely attempting to depict Republicans as “violent mobster[s],” deem questioning an election “treasonous” (though Democrats have done the same), and prove that “secure” elections can only be the product of a “federalized” constitutional system of elections with Democrats “given control over every mechanism of it.” 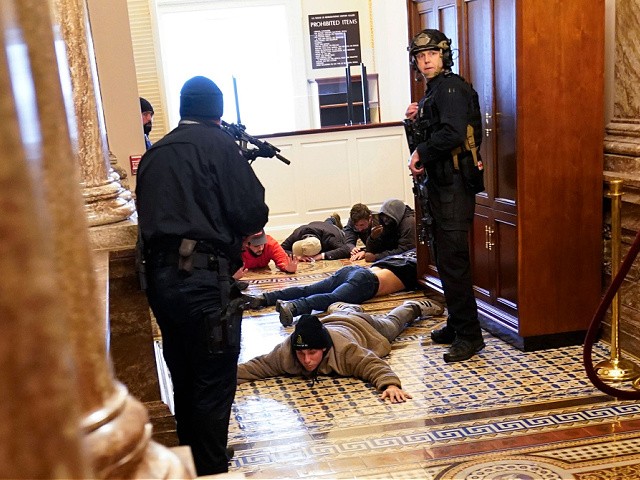 U.S. Capitol Police hold protesters at gunpoint near the House Chamber inside the U.S. Capitol on Wednesday, Jan. 6, 2021, in Washington. (AP Photo/Andrew Harnik)

Biggs, who serves as chairman of the House Freedom Caucus, concluded by stating there is “no place for political violence in our society” nor for the “lies, cover ups, and witch hunts” of the Democrats.

“Americans should ignore this group of unimpressive, hateful, Trump-hating loons,” he added.

Biggs’ statement came as Democrats use the January 6 riot to delegitimize former President Donald Trump and his agenda, while warning that American democracy is at stake.

Vice President Harris also compared the event to the bombing of Pearl Harbor in 1941 and the terrorist attacks of September 11, 2001.