McCarthy told Breitbart News Washington Bureau Chief Matthew Boyle Monday that he would strip Schiff and Rep. Eric Swalwell (D-CA) of their assignments on the House Permanent Select Committee on Intelligence and Rep. Ilhan Omar (D-MN) of her assignment on the House Foreign Affairs Committee.

Schiff spokesperson Lauren French said in response to the story:

It is always difficult to take Kevin McCarthy seriously. Nevertheless, allowing McCart[h]y to get anywhere near the Speaker’s gavel would be catastrophic — not just because of his propensity for falsehoods and smears, but because he will exist solely to do Donald Trump’s bidding — even potentially overturning the 2024 results.

Despite French’s statement that it is “always difficult” to take McCarthy seriously, Schiff’s campaign team swiftly took action, blasting out a fundraising email detailing McCarthy’s plan to oust Schiff from the Intelligence Committee.

See a copy of the email below: 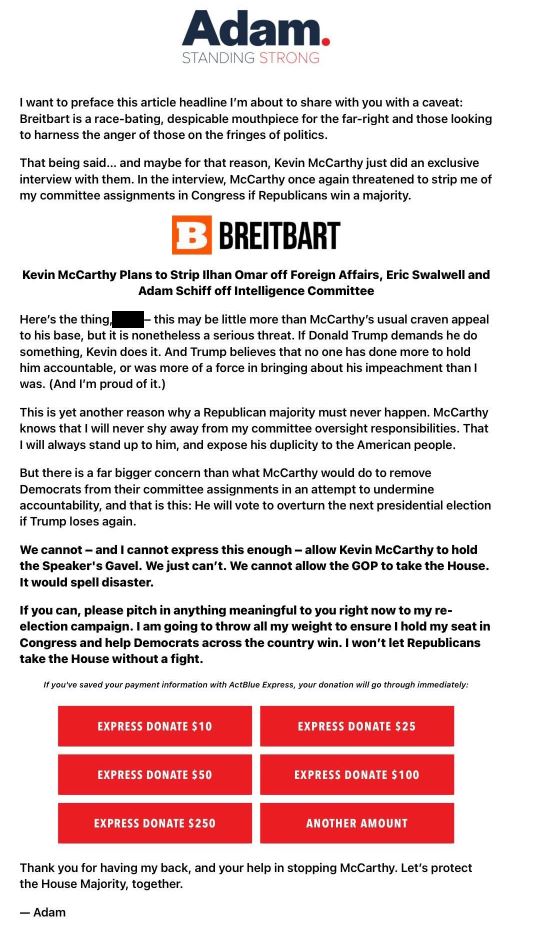 I want to preface this article headline I’m about to share with you with a caveat: Breitbart is a race-bating, despicable mouthpiece for the far-right and those looking to harness the anger of those on the fringes of politics.

That being said… and maybe for that reason, Kevin McCarthy just did an exclusive interview with them. In the interview, McCarthy once again threatened to strip me of my committee assignments in Congress if Republicans win a majority.

Schiff also called McCarthy’s call to remove Schiff “little more than McCarthy’s usual craven appeal to his base, but it is nonetheless a serious threat.”

The California Democrat said that removing him from the committee would “undermine accountability:”

If Donald Trump demands he do something, Kevin does it. And Trump believes that no one has done more to hold him accountable, or was more of a force in bringing about his impeachment than I was. (And I’m proud of it.)

This is yet another reason why a Republican majority must never happen. McCarthy knows that I will never shy away from my committee oversight responsibilities. That I will always stand up to him, and expose his duplicity to the American people.

But there is a far bigger concern than what McCarthy would do to remove Democrats from their committee assignments in an attempt to undermine accountability, and that is this: He will vote to overturn the next presidential election if Trump loses again.

He added, “We cannot – and I cannot express this enough – allow Kevin McCarthy to hold the Speaker’s Gavel. We just can’t. We cannot allow the GOP to take the House. It would spell disaster.”

McCarthy told Boyle about his plan to remove Democrats from committee assignments:

The Democrats have created a new thing where they’re picking and choosing who can be on committees. Never in the history [of Congress] have you had the majority tell the minority who can be on committee. But this new standard which these Democrats have voted for—if Eric Swalwell cannot get a security clearance in the private sector, there is no reason why he should be given one to be on Intel or Homeland Security.”

He added, “He will not be serving there.”