Georgia has money to spare this year, and Gov. Brian Kemp (R) plans to direct much of it toward education, the governor said during his State of the State address on Thursday.

Kemp laid out a host of education-related priorities at the beginning of his speech, including completing the second half of his 2018 campaign promise for $5,000 teacher pay increases, fully reversing education budget cuts that were made in response to coronavirus, and passing a “parental bill of rights.”

Evoking both Psalm 16:8 of the Bible and famed high school football coach Billy Henderson, the Georgia Republican credited the state’s resiliency amid “divisive politics, the pandemic, and unforeseen challenges” for the state’s now strong economic position.

“By keeping our state open for business, bringing record levels of jobs and investment, and fighting to put hardworking Georgians first,” he continued, “we now have the opportunity to build a safer, stronger Georgia for all who call the Peach State home.”

We’re about to head upstairs for my #SOTS2022 address. 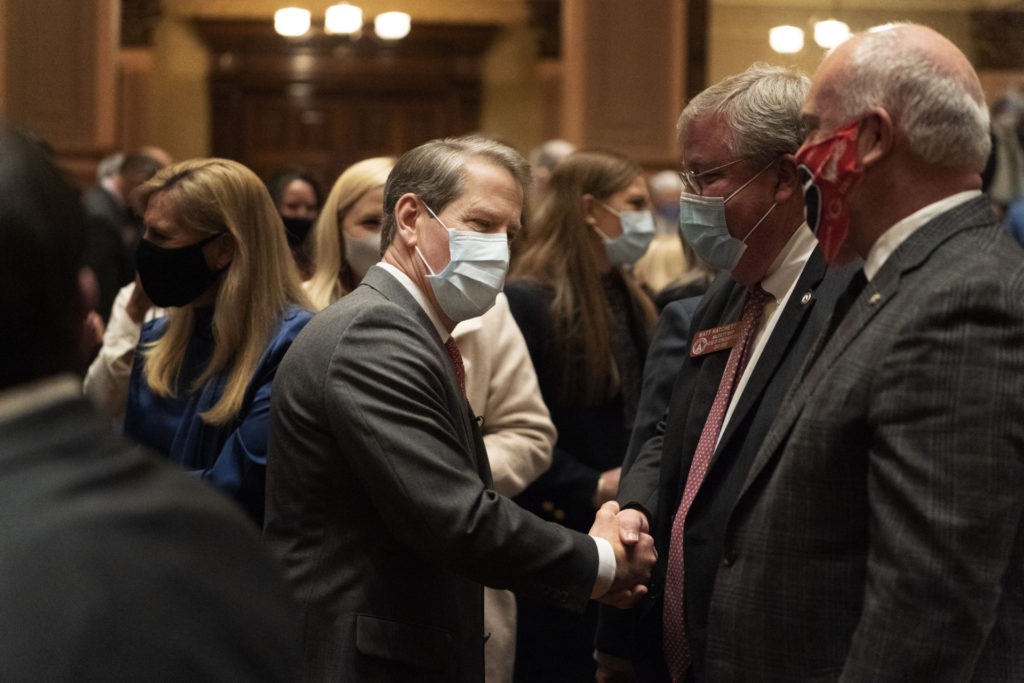 Georgia Gov. Brian Kemp arrives for the State of the State on January 13, 2022, in Atlanta. (AP Photo/Brynn Anderson)

The state ended fiscal year 2021 with a $3.7 billion budget surplus, which an Atlanta Journal-Constitution analysis found was due largely to revenue growth from state income, sales, and corporate income taxes, as well as federal coronavirus relief.

Kemp said of his plans to pour some of the extra funds into schools, “The need for a world-class K–12 education to prepare our children for an everchanging workforce has never been greater.”

The governor said he plans to use $425 million to properly fund education in his budget proposal for fiscal year 2023, which begins July 1, noting the funds are intended to go “directly to schools in every corner of Georgia to hire more teachers, reduce class sizes, and ensure every child receives a quality education.”

Kemp also vowed to sign a parental bill of rights this year once the legislation makes its way through the General Assembly.

The initiative to focus on parents’ role in the education system has gained traction nationwide, including at the federal level, where Sen. Josh Hawley (R-MO) introduced a bill that would move education policy issues — like the contents of curriculums and the level of access to school information — closer into the hands of parents.

“From the classroom to the ball field, there are those who want to divide our kids along political lines, push partisan agendas, and indoctrinate students from all walks of life,” Kemp said. “This is wrong. It’s dangerous, and as long as I’m governor, it will not take root in Georgia.”

The governor also said that education-related legislation Georgia plans to pass this year will serve to prohibit “divisive ideologies, like critical race theory, that pit kids against each other,” “ensure fairness in school sports,” and “address obscene materials online and in our school libraries.”