RICHMOND, Virginia — Virginia Gov. Ralph Northam (D) is set to end his term on January 15 after a tumultuous four years as the protagonist of several scandals, most notably wearing blackface, only to make a political comeback based almost entirely on advancing diversity, inclusion, and equity initiatives.

While at the time of the blackface scandal, Democrats, establishment media organizations, and other left-wing groups called on the governor to resign, Northam’s last weeks in office have been viewed by the media as an opportunity to rewrite his legacy.

The Washington Post appeared eager to be of service, revising the narrative of Northam as one of personal growth — the “rebirth” of a “wounded healer.” The Richmond Times-Dispatch similarly advanced the narrative of someone who became “a better person” and ushered in a more “inclusive state.”

Such a narrative comes after Northam’s most prominent scandal, one in which he likely either wore blackface or a Ku Klux Klan outfit, then apologized for it, and then claimed it was not him and that he had never even seen the picture placed prominently on his personal page of his medical school yearbook.

The media, however, decided to agree with the governor that he was neither the Klansman, nor the person in blackface, prompting the Post to ask, “As incredible as Northam’s political comeback has been, it still turns on a mystery: Who is in that photo?”

And yet while much of the media reported on the blackface scandal, many never mention the scandal from just weeks earlier in January of 2019, when Northam seemed to advocate infanticide — in some medical detail — on radio.

In defense of an abortion bill up for consideration in the Virginia General Assembly — one that would legalize abortion up to the point of birth — the pediatric neurologist-turned-governor walked the listeners of WTOP’s “Ask The Governor” through what seemed to be a post-birth abortion — in other words, killing a baby who has already been born.

The comments drew the ire of pro-life people across the country, with many noting that not even New York or California had abortion advocacy that radical.

At the time, Sen. Ben Sasse (R-NE) told National Review, “In just a few years pro-abortion zealots went from ‘safe, legal, and rare’ to ‘keep the newborns comfortable while the doctor debates infanticide.’ I don’t care what party you’re from — if you can’t say that it’s wrong to leave babies to die after birth, get the hell out of public office.”

“Northam shocked the consciences of Americans everywhere when he endorsed a bill allowing abortions right up through birth, and even seemed to sanction depriving a newborn slated for abortion of basic medical attention,” March for Life President Jeanne Mancini told Breitbart News. “Those who lack a basic compassion for society’s most vulnerable have no business governing.”

Attempting to retroactively save face for Northam, however, the Post dutifully reported that “conservatives seized on [the comments] to accuse the doctor-governor of supporting infanticide. It was a false allegation, but Northam did little to clarify his remarks.”

The blackface scandal, however, immediately eclipsed the infanticide scandal, and set the foundation for a diversity, inclusion, and equity-driven administration that ultimately culminated in the Commonwealth’s being used as a national battleground over critical race theory in schools and elsewhere. 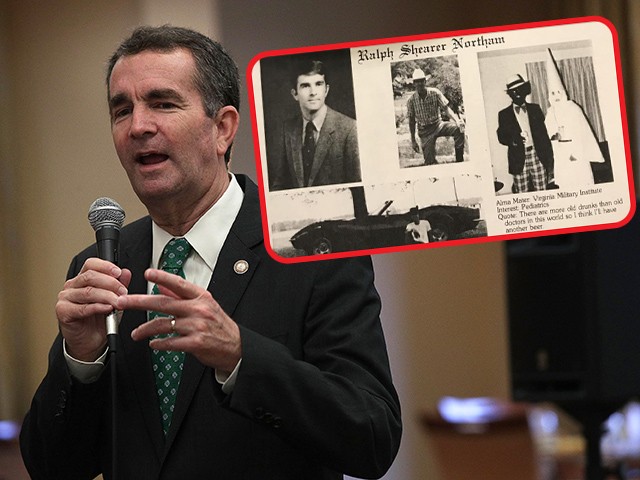 Northam and the medical school yearbook page depicting a person in blackface and a person in a Ku Klux Klan robe. (Photo by Alex Wong/Getty Images).

Detailing the governor’s “rebirth,” the Post drives the narrative that perhaps the blackface scandal was actually the best thing that happened to Northam, considering the rest of his term was so focused on penance that Sen. Tim Kaine (D-VA) — who initially called on Northam to resign — now believes Northam is the “most consequential Virginia governor in the modern era,” per the Post. Contributing to Kaine’s assessment was Northam’s push to abolish the death penalty, becoming the first Southern state to do so; legalize marijuana; and, as the Post puts it, “expand access to the vote.”

Former Gov. Douglas Wilder (D), who became the Commonwealth’s first black governor since Reconstruction and the country’s first popularly elected black governor, said, “It is difficult for anyone who watched the press conference today to conclude that he has any other choice … but to resign.”

I stated, earlier, that Gov. Northam’s continuing in office was his choice to make. It is difficult for anyone who watched the press conference today to conclude that he has any other choice … but to resign.

And while many, including Kaine and former Gov. Terry McAuliffe, backtracked on their calls for Northam to resign, Wilder — who now serves on Governor-elect Glenn Youngkin’s (R) transition team — maintained his position, slamming those who reversed themselves. “The people of Virginia have not forgotten, they’re not stupid,” he said. “They’re not fooled, they’re not being hoodwinked.”

Indeed, after some apparent soul-searching and speaking with members of the Virginia Legislative Black Caucus, “Northam made a pledge: He would stay and devote the rest of his term to fighting racial inequity,” as opposed to resigning.

“Northam’s rebirth is as unlikely a story as any you might find in today’s polarized world of instant cancellation,” the Post continued. “It was driven partly by an extraordinary effort to connect with Black constituents across Virginia, a process that Northam says broke him down and built him back a better person — more aware of the ugly reality of race in America.”

“I have had to confront some painful truths,” Northam said. “Among those truths was my own incomplete understanding regarding race and equity.”

That “ugly reality of race in America” the governor needed to “confront” led him to create the first state cabinet-level diversity officer position in the country. With his new “understanding,” Northam began describing racism as “part of a system that touches every person and every aspect of our lives, whether we know it or not.”

“I think if the … scandal had not occurred he would not have been as effective,” Virginia Commonwealth University political scientist Jatia Wrighten, who focuses on race in state legislatures, said.

As the Times-Dispatch pointed out, “Whatever goals Northam came into office with, he now owed his political future to Black Virginians who supported him or gave him a chance to make his power work for them.”

While some on the left are disappointed with Northam for not going far enough — for example, not challenging the Commonwealth’s right-to-work law or shutting down natural gas pipelines — he did get other leftist proposals through that surprised many Virginians.

Before Northam, and before the full Democrat control of the General Assembly starting in 2020, Virginia’s gun laws were relatively liberty-minded. The Democrats in Richmond, however, were able to push through handgun purchase limitations to one gun per month, red flag laws, and locally enforced gun-free zones including at protests and rallies, among other provisions. 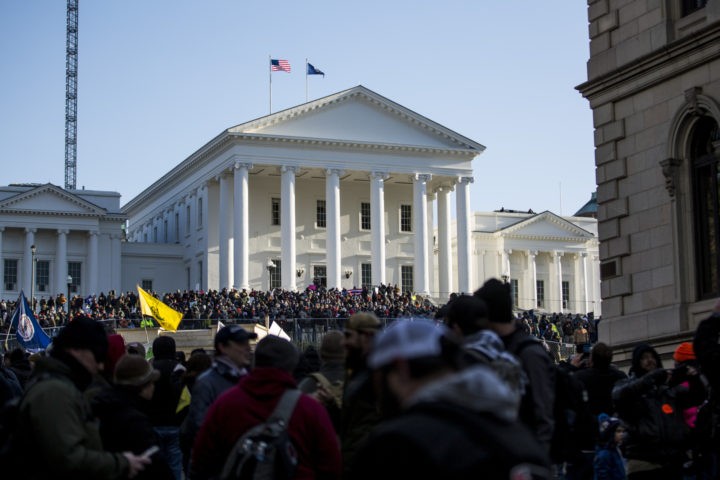 Northam also sought a ban on “assault-style weapons,” but was unsuccessful.

While the governor hinted that his political career will be over after he leaves office Saturday, as he plans to return to the medical field, he did appear to hint at the extremely lucrative diversity, inclusion, and equity speaking and consulting business that has taken businesses, governments, and other organizations by storm, telling the Times-Dispatch that “talking one-on-one with patients and their families, talking to students at a college or university, or ‘going into a boardroom’ to talk about the importance of embracing diversity,” may be in his future.

“I think I can help in that regard because discussions on race have often fallen on people of color,” he said, “and I think it probably is a good idea that maybe people that look like me be part of the discussion as well.”

Northam’s successor, Youngkin, will be sworn into office at 12:05 p.m. Eastern on January 15 outside the Virginia State Capitol in Richmond, Virginia.