President Joe Biden has allowed the U.S. Embassy in Kyiv, Ukraine, to go without an ambassador for the entire first year of his presidency.

When asked about the vacancy earlier this month, White House Press Secretary Jen Psaki said Biden “absolutely plans” to offer a nomination. However, she explained that Biden is still “looking to find the right person to nominate to fill the role.”

There are calls from both sides of the aisle for Biden to fast-track a nomination for the ambassadorship. “I’ve continuously raised to State Department officials the urgent need for this post to be filled in Ukraine,” said Democrat Sen. Jeanne Shaheen (D-NH), who chairs the Senate Foreign Relations Subcommittee on Europe and Regional Security Cooperation.

Sen. Ted Cruz (R-TX) blasted Biden for leaving the Ukrainian ambassadorship open for so long and urged him to put a nomination forward. 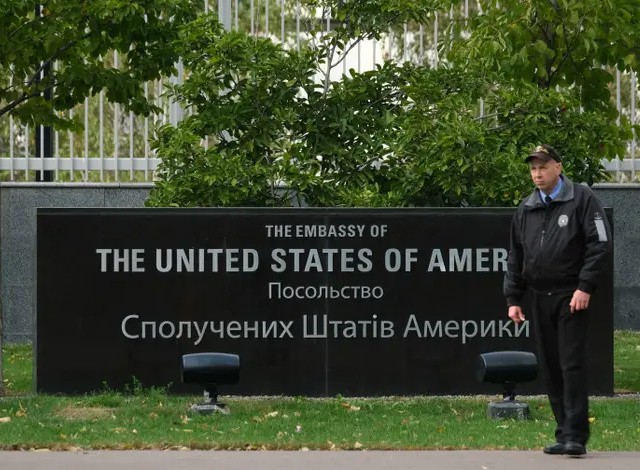 A security guard stands outside the embassy of the United States of America on October 01, 2019, in Kyiv, Ukraine. (Photo by Sean Gallup/Getty Images)

William Taylor, former U.S. ambassador to Ukraine, called the vacancy “inexplicable” and said, “it is a mystery” why Biden has not nominated someone.

An ambassador in Kyiv would be vital right now as Russian leader Vladimir Putin reportedly recently positioned over 100,000 troops on Ukraine’s border. Even as Biden anticipates Putin will invade Ukraine, he has shown no sense of urgency regarding putting forward a name to fill the ambassadorship.

“My guess is he will move in; he has to do something,” Biden said about Putin’s troops at the Ukrainian border.

On Friday, Reuters reported that German Chancellor Olaf School refused to meet with Biden to discuss the ongoing crisis at the Ukraine-Russia border.

Biden doesn’t even have an ambassador nominee for Ukraine.

And the new German Chancellor refused an invitation from Biden to talk Ukraine. #Chaoshttps://t.co/J84ImQ51Kw

Marie Yovanovitch was the last Senate-confirmed U.S. ambassador to Ukraine in 2016.

Republican senators previously blocked Biden’s ambassador nominees, but Sen. Cruz struck a deal with Democrat Senate Leader Chuck Schumer (D-NY) to advance Biden’s nominees. As a result, the Senate approved 32 Biden nominees for ambassador, but Ukraine remained empty because Biden failed to nominate someone for that post. Shockingly, Biden’s State Department has reportedly not talked with Ukraine’s government about the open vacancy. Ukraine’s involvement in the nomination process is crucial to ensure Ukraine consents to Biden’s nominee.

Along with Ukraine, Biden has left several other key ambassadorships vacant across the globe. For example, Biden has not nominated ambassadors for South Korea, Saudi Arabia, the Philippines, Qatar, the United Aram Emirates, Hungary, Kazakhstan, and many more.