Her statement in the House of Commons appeared to be a dramatic shift from her initial support for the protests, which have lasted nearly two weeks in the national capital, Ottawa, but have begun to dispute Canada-U.S. supply chains through blockades along Canada’s southern border. Ambassador Bridge, the largest American-Canadian crossing, has come to an ongoing standstill this week as hundreds of trucks park themselves on and around it, inhibiting international traffic.

Prior to Bergen’s remarks on Thursday, she had directed most of her ire towards leftist Prime Minister Justin Trudeau, who has branded those distrusting of Chinese coronavirus mandate products “racist” and “misogynist” and compared the protesters to Nazis.

The “Freedom Convoy” protesters are urging an end to all civil rights violations tied to the Chinese coronavirus pandemic, including vaccine and mask mandates, business shutdowns, travel restrictions, and mandatory quarantines. This large-scale demand began with truckers, the vast majority of whom are vaccinated, opposing a vaccination mandate for international travel, arguing that most truckers spend much of their work time alone and do not present any significant risk of coronavirus transmission. 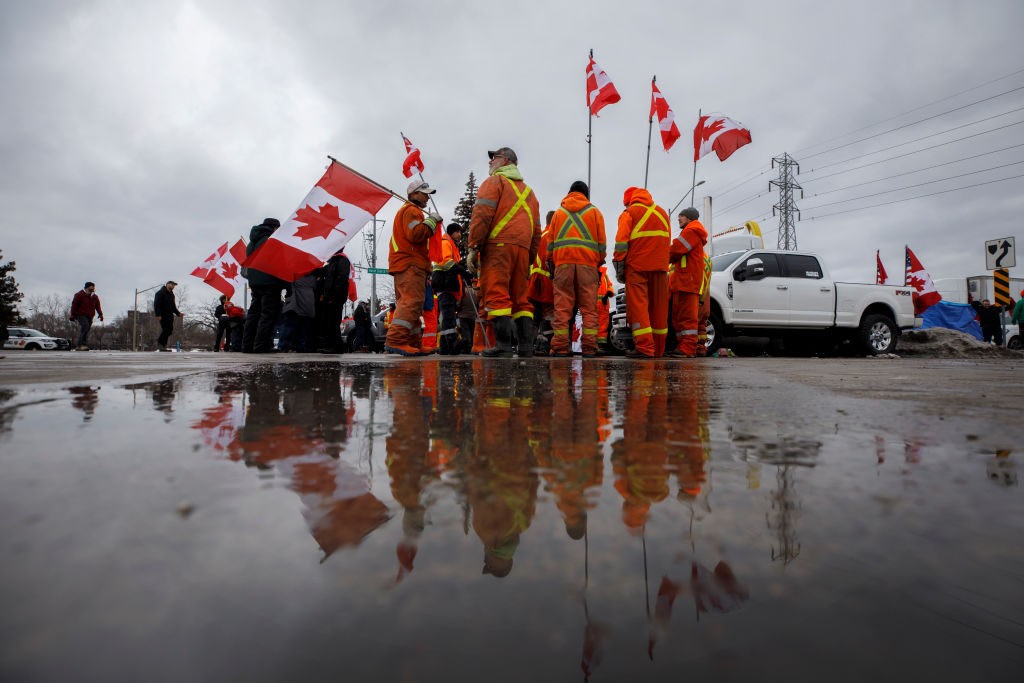 Protestors and supporters attend a blockade at the foot of the Ambassador Bridge, sealing off the flow of commercial traffic over the bridge into Canada from Detroit, on February 10, 2022 in Windsor, Canada. (Cole Burston/Getty Images)

“To all of you who are taking part in the protests, I believe the time has come for you to take down the barricades, stop the disruptive action and come together,” Bergen said on Thursday. “The economy that you want to see reopen is hurting. Farmers, manufacturers, small businesses and families are suffering. I believe this is not what you want to do.”

Bergen promised that, if the protests concluded, the Conservative Party “will not stop until the mandates have ended.”

Canada’s Globe and Mail noted that Bergen had previously been supportive of the movement, even meeting with protesters in Ottawa and describing them as “peaceful” – an accurate statement according to Ottawa police reports. The protests have enjoyed a festival atmosphere and featured widespread dancing, free food, and bouncy castles and other activities for children.

Bergen was one of the Conservative Party’s most enthusiastic supporters of the protests initially.

“Conservatives have been opposed to federally mandated vaccines since Trudeau introduced them; and we oppose the mandatory vaccine on Canadian truckers,” Bergen said in a statement in January. “I support peaceful demonstrations against these mandates, and our truckers from Portage-Lisgar and from across Canada.” 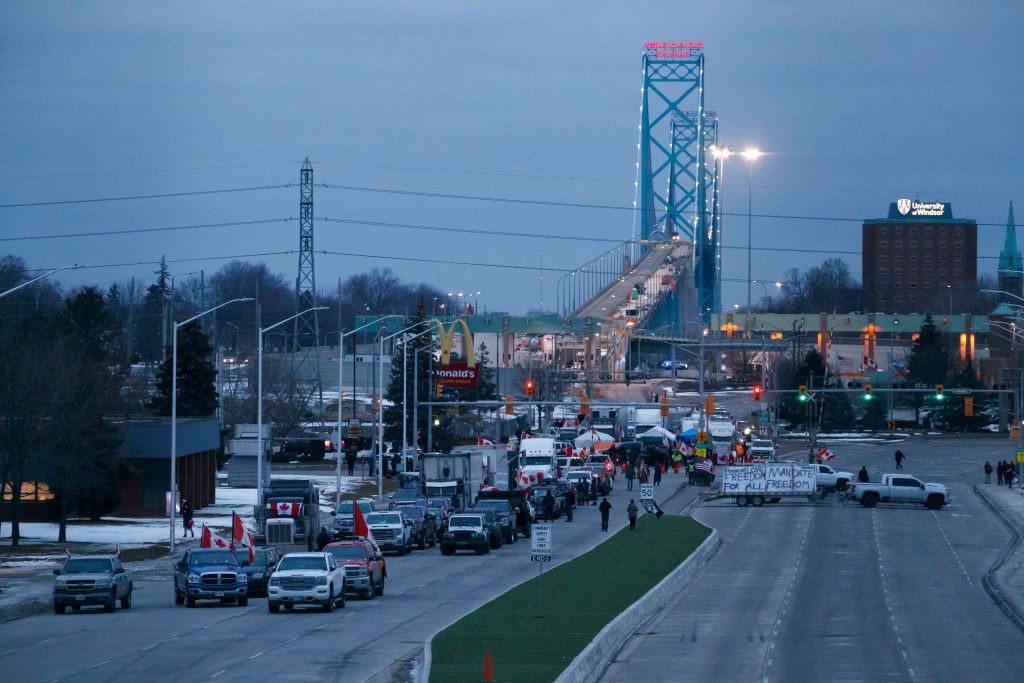 Protestors and supporters at a blockade at the foot of the Ambassador Bridge, sealing off the flow of commercial traffic over the bridge into Canada from Detroit, on February 10, 2022 in Windsor, Canada. (Cole Burston/Getty Images)

Bergen’s initial support came before the Conservative Party ousted former leader Erin O’Toole in early February, resulting in Bergen becoming interim leader. Bergen has not announced if she will run to keep the position. During her first statements in Parliament after becoming interim leader, however, Bergen confronted Trudeau for his consistent insults against the protesters, referring to them as “patriotic, peace-loving Canadians who are called misogynists and racists by the Prime Minister.” During her first remarks as leader, Bergen compared these people to Trudeau, who “wore blackface on more times than he can remember.”

Bergen’s stance contrasts significantly with the only person to announce a formal campaign to run the Conservative Party,  Pierre Poilievre, who is currently running uncontested. Poilievre has used his profile to condemn Trudeau, like Bergen, but has not issued any statement urging the protests to end. On the contrary, in an interview with the National Post published on Friday, he blamed any supply chain issues or blockages on Trudeau, not the protesters.

Trudeau Under Fire: Why Did You "Jeopardize" Our Health to "Save" Your Job? pic.twitter.com/5Z11MGhk5e

“I’m proud of the truckers and I stand with them,” Poilievre said in an interview the National Post said it would publish as a podcast interview next week. “They have reached a breaking point after two years of massive government overreach of a prime minister who insults and degrades anyone who disagrees with his heavy-handed approach.”

“If Canadians are being inconvenienced, or in any way suffering from these protests, it is because Justin Trudeau made these protests happen and his intransigence is keeping the protests going,” he asserted.

Poilievre published a letter to Trudeau on Thursday urging him to “end all federal vaccine mandates, encourage an end to provincial mandates, [and] state clearly that there will be no taxes on the unvaccinated,” asking Canadians to sign it.

My open letter calling for the Prime Minister to give Canadians back control of their lives.

The letter accused Trudeau of having “spite” for the truckers and asserted that that no evidence suggests that mandating that truckers receive doses of Chinese coronavirus vaccine products would improve the pandemic situation in any way.

“You have divided the country. You have told Canadians to fear their neighbors. You have called decent people horrible names. You have destroyed people’s livelihoods on the basis of their personal health choices,” the letter read. “These actions are directly to blame for the protests in Ottawa and across Canada.”

“Do not allow your spite towards the trucker protest to stand in the way of doing the right thing. This is not about saving face. Your pride and ego come after the public interest,” the letter concluded.