President Joe Biden told reporters on Thursday he has “every indication” Russia will “attack Ukraine” in the near future, echoing warnings from his secretary of state, Antony Blinken, and NATO officials that follow no significant activity of this kind on Wednesday.

Politico, a Washington blog, reported last week that Biden had been telling allies that Russian forces would launch a full-scale invasion on Wednesday, citing “a person familiar.” In response, Ukrainian President Volodymyr Zelensky established a joke holiday he branded “Unity Day” to show the world that Ukrainians do not fear another Russian invasion. No such invasion occurred.

Lost in remarks from Biden administration and other Western leaders on the topic is the fact that Russia invaded Ukraine in 2014 and continues to illegally occupy Crimea and maintains a significant presence in the Donbas region. Russia claims Crimea as a legitimate Russian territory but denies any involvement in Donbas.

Despite the lack of action after the White House’s first predictions that Russian leader Vladimir Putin could expand the Ukrainian invasion before the 2022 Beijing Winter Olympics began, and after the predictions of an invasion on Wednesday proved not to have come to pass, Biden asserted on Thursday that Russia would formally invade “in the next several days.”

Biden’s remarks followed claims from the Russian Defense Ministry that it had pulled troops away from the Ukrainian border.

“As combat training measures are coming to a close, the troops, as is always the case, will conduct combined marches to their permanent garrisons,” a Defense Ministry spokesman said on Wednesday.

Both Biden administration officials and NATO leadership disputed the claim.

“We have yet to see any pullback, any withdrawal of Russian forces from around Ukraine’s borders,” Secretary of State Antony Blinken said in an interview with Ukrainian television on Wednesday. “We’re watching that very carefully, and again, it’s very important to look at what Russia actually does, not what it says it’s doing.”

Similarly, an unnamed senior Biden administration official claimed in a call on Wednesday that Russia had actually increased, not drawn down, its military presence near Ukraine.

“We have now confirmed that in the last several days, Russia has increased its troop presence along the Ukrainian border by as many as 7,000 troops, with some arriving as recently as today,” the official said.

Ukraine on Monday dismissed the Biden State Department's withdrawal of the families of U.S. embassy staff in Kyiv as "premature." https://t.co/6nyqLuyAi7

“We have heard the signs from Moscow about readiness to continue diplomatic efforts. But so far, we have not seen any de-escalation on the ground. On the contrary, it appears that Russia continues its military buildup,” Stoltenberg asserted.

Satellite images taken of the Ukrainian border with Belarus appear to corroborate these claims. Photos published by Radio Free Europe/Radio Liberty (RFE/RL) appear to show “the building of a pontoon bridge in Belarus and the arrival of attack helicopters” by Russian forces.

The Zelensky administration in Ukraine has largely reacted to the current panic of an imminent war in the United States with frustration, as a war with Russian-backed separatists has been ongoing on Russian soil for nearly a decade. The state-run site Ukrinform published an editorial on Wednesday explaining that the lack of panic among average Ukrainians, compared to breathless reports in Western media, is largely the product of the fact that ongoing war is a daily reality for Ukrainians already.

“In the wide range of feelings experienced by Western journalists deployed in Ukraine in these troubled days is confusion. After all, Europe froze at the sound of Russian war drums,” the editorial narrated. “The feed keeps bringing alarming news on Russian tanks, artillery and Iskander missile systems amassed along the Ukrainian border. … Yet, there’s no apparent war fear in Ukraine – much to everyone’s surprise.”

Zelensky himself mocked reports that the Russians would “invade” on Wednesday. 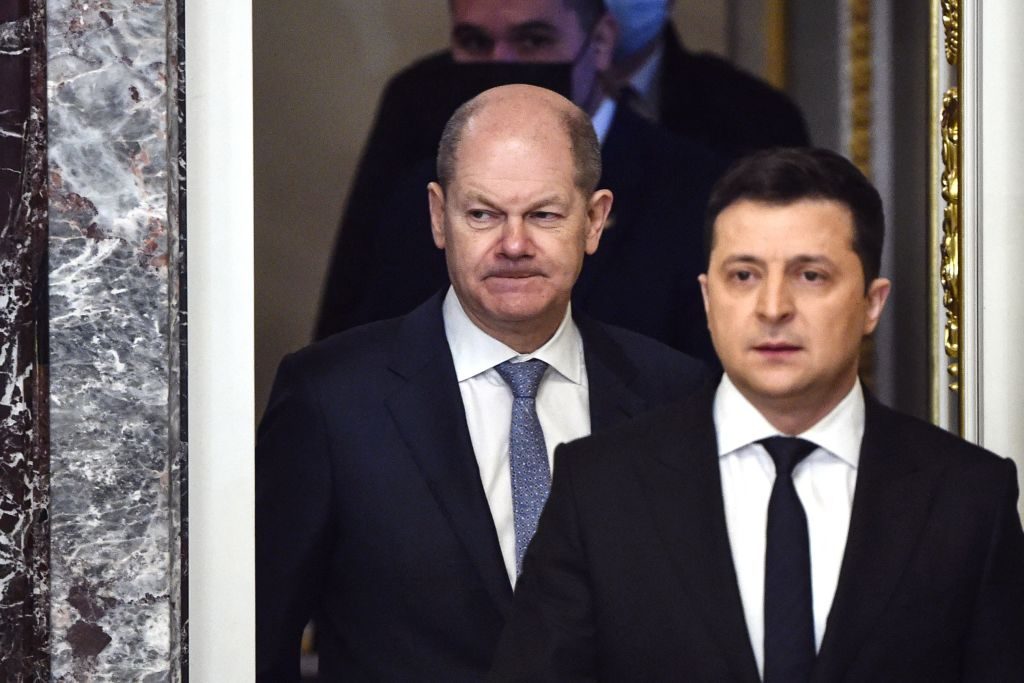 German Chancellor Olaf Scholz (L) and Ukrainian President Volodymyr Zelensky (R) arrive to hold a joint press conference in Kyiv on February 14, 2022. – Scholz landed in Kyiv for crisis talks with Zelensky, ahead of a visit to Moscow to head off what Berlin said was the “very critical” threat of a Russian invasion of Ukraine. (SERGEI SUPINSKY/AFP via Getty Images)

“If you, or anyone else, has additional information regarding a 100 percent Russian invasion starting on the 16th, please forward that information to us,” Zelensky told reporters this weekend. On Monday, he declared Wednesday a holiday.

“We are told that February 16 will be the day of the attack. We will make it the Day of Unity,” Zelensky said in a nationally televised address. “The relevant decree has already been signed. On this day, we will hoist national flags, put on blue and yellow ribbons and show the world our unity.”

Zelensky has previously expressed exasperation with the current panic because, he told reporters, it has damaged the country’s economy while being at odds with reality.

“I don’t think the situation is more intense than it was at that time, at peak time in 2021,” Zelensky told reporters during a press conference in late January. “There was no such coverage at that time of Ukraine.”