Why did the Russians invade Ukraine? One reason is that they could afford to. Vladimir Putin’s neo-Tsarist empire has piled up an estimated $631 billion in currency reserves. That’s a lot of mad money, or should we say, conquest money.

And a principal reason that Putin has all that wealth is that the Biden administration has been helping him, however inadvertently.

How did Joe Biden help Putin? Biden imposed energy scarcity on this country, thereby opening up more of the world market for the Russians to sell their energy. And because energy is scarcer, it’s more expensive—all good news for Putin and his military.

Yes, sadly, the Trump-era strategy of American energy dominance gave way to Biden’s plan for energy shrinkage. All in the name, of course, of combating “climate change.”

Indeed, the 46th president’s sickly energy strategy brings to mind that of one his predecessors. That would be the 39th president, Democrat Jimmy Carter, who, like Biden, also presided over energy shrinkage, higher prices, and resulting strategic weakness. 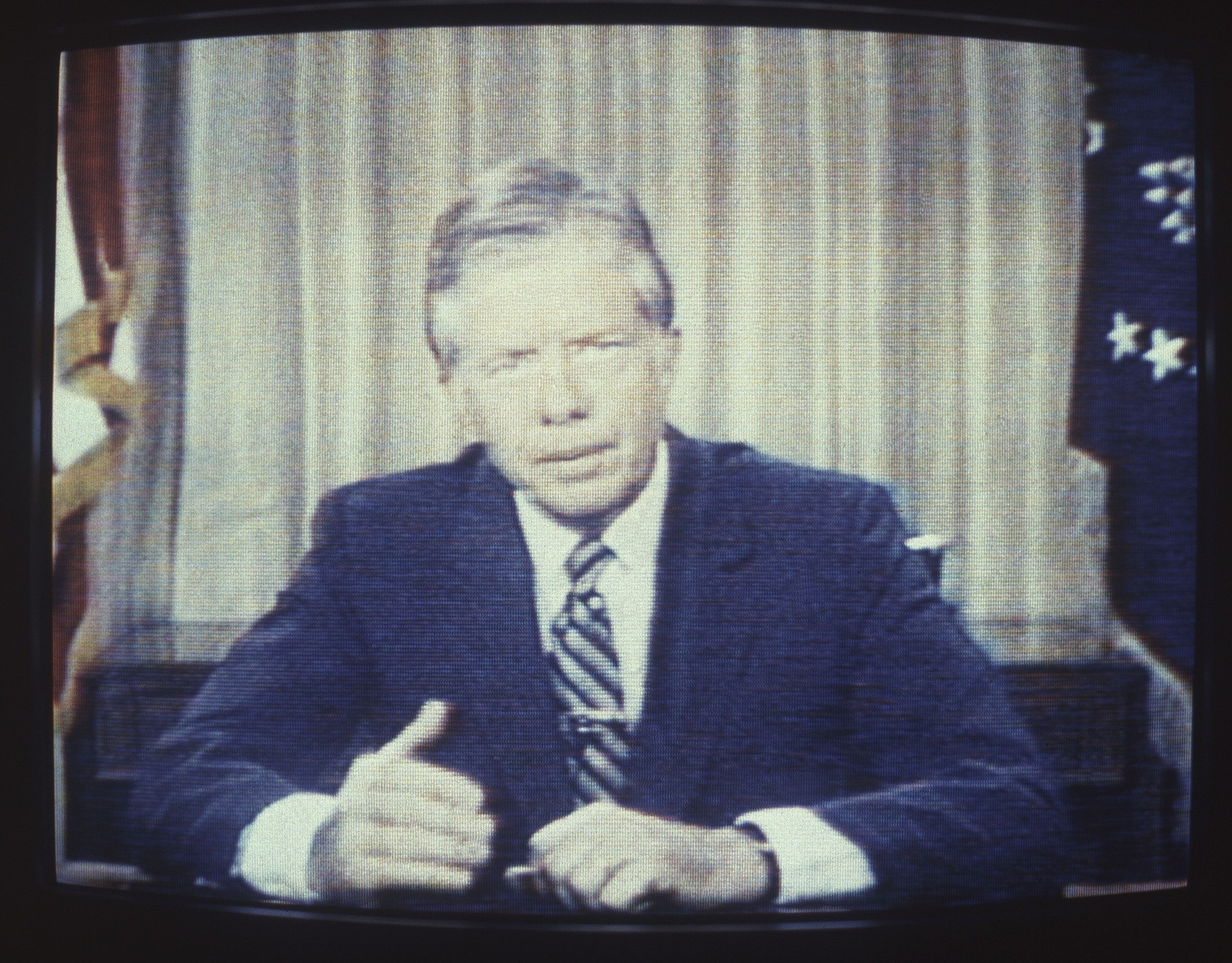 Okay, so that’s depressing: The thought that we’re living through Carter 2.0. Yet here’s an encouraging thought: We survived the sad-sack saga of Carter, and then we triumphed when Carter was replaced, after a single term, by the 40th president, Ronald Reagan, who undid Carter’s policies and, truly, made America great. So if we did it then, we can do it again: 2024 isn’t that far away. And that’s an encouraging thought.

We’ll get to Reagan in a moment, but first, let’s take a closer look at the Carterian present-day.

The Russians have a lot of oil and gas reserves, the eighth largest in the world, and they’re selling as much as they can; the country is the world’s third-largest producer of oil, and the second-largest producer of natural gas. In fact, in 2021, Russia exported $165 billion of oil and natural gas. That dollar total was up substantially from the year before because prices were zooming, in part because of the economic snap-back from Covid-19, and also because of the Biden administration’s policy of unilateral disarmament—more like a universal clampdown—on oil and gas production. We all know that Biden cancelled the Keystone XL Pipeline on his very first day in office, and in the year since, the Heritage Foundation counts another dozen Biden anti-energy policies.

So with less production in the U.S. (and the prospect of much less, investors don’t just think short-term, they think long-term) oil and natural gas prices surged in 2021, further bulging up the Russian treasury. In fact, energy exports account for more than a third of Russia’s national budget. 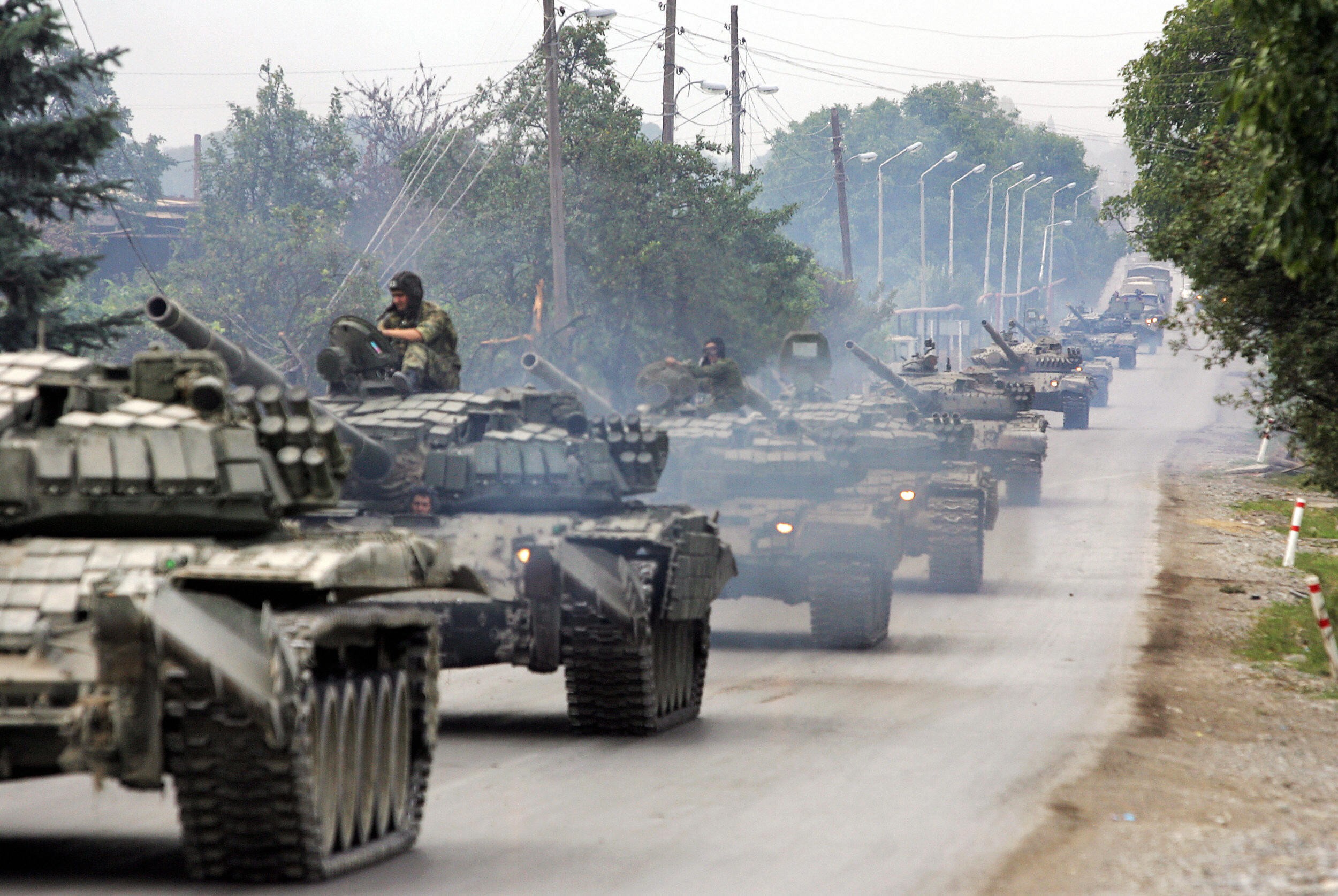 A column of Russian tanks moves on the road on August 21, 2008, not far from the South Ossetian capital Tskhinvali. (KAZBEK BASAEV/AFP via Getty Images)

The embattled Ukrainians have noticed the financial source of Russian aggression.

The Ukrainians have been saying all along that if the civilized world wants to deter Putin, it will have to hit him where he lives—it will have to focus on energy, not little things that the Russian autocrat doesn’t really care about. “We need real sanctions, not just some problems for Putin’s friends,” Ukrainian lawmaker Oleksiy Goncharenko tweeted on February 24. “We need an embargo on Russian gas and oil because every barrel of Russian oil and every cubic meter of Russian gas is now full of the blood of Ukrainians.” That’s a good way to put it: Russian hydrocarbons equals Ukrainian blood.

Yet stupefyingly, for all the Biden administration’s huffing and puffing about the Russian invasion, it has not—repeat, not—sought to sanction, or in any way limit, Russian energy exports. As White House Deputy National Security Advisor Daleep Singh said on February 24, “To be clear: Our sanctions are not designed to cause any disruption to the current flow of energy from Russia to the world.”

Why not? Why this sissy posture? Because, in a word, the Europeans—our allies in any possible action against Putinian aggression—are dependent on Russian energy; Putin’s pipelines supply about 35 percent of Europe’s natural gas. 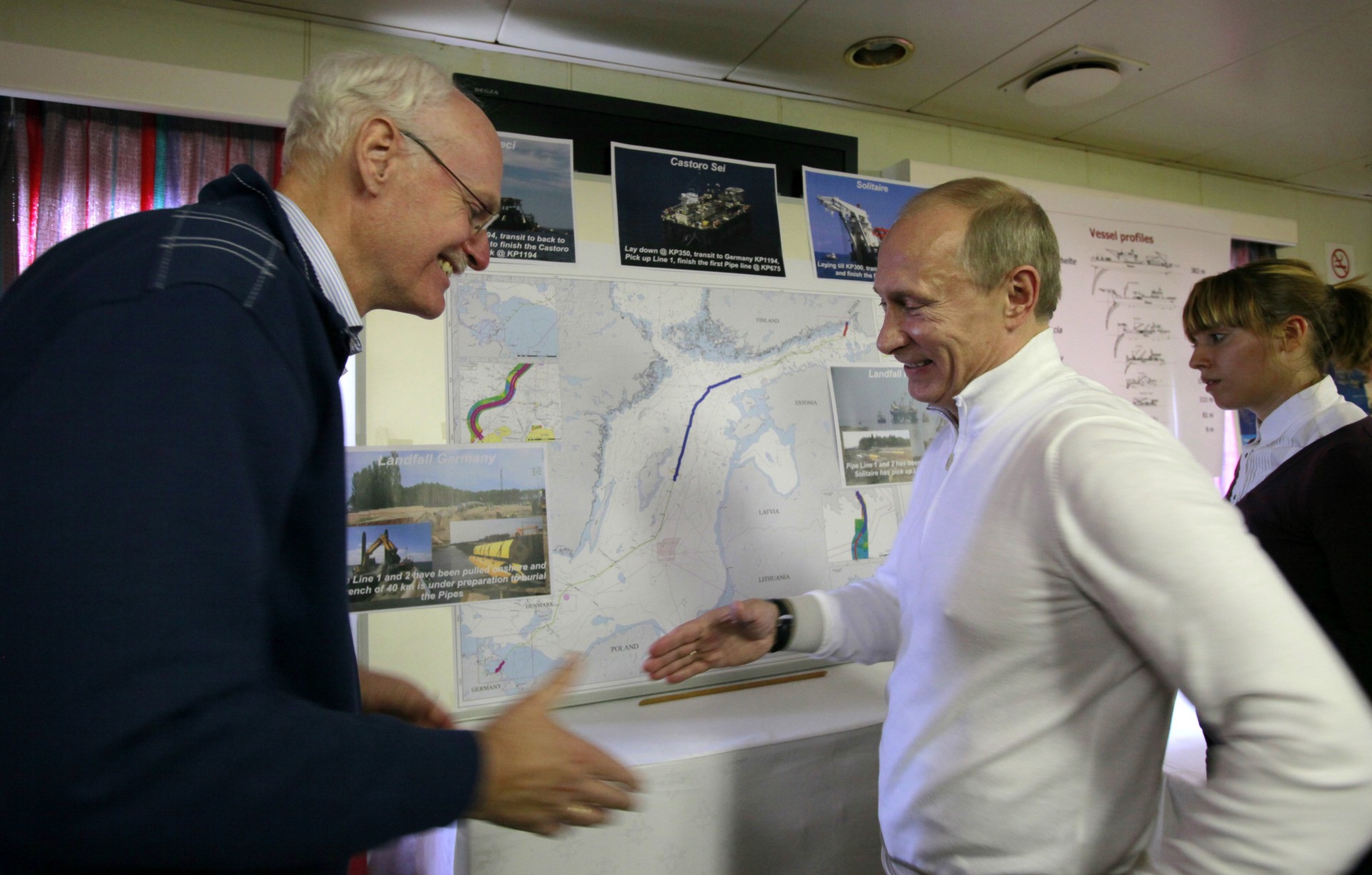 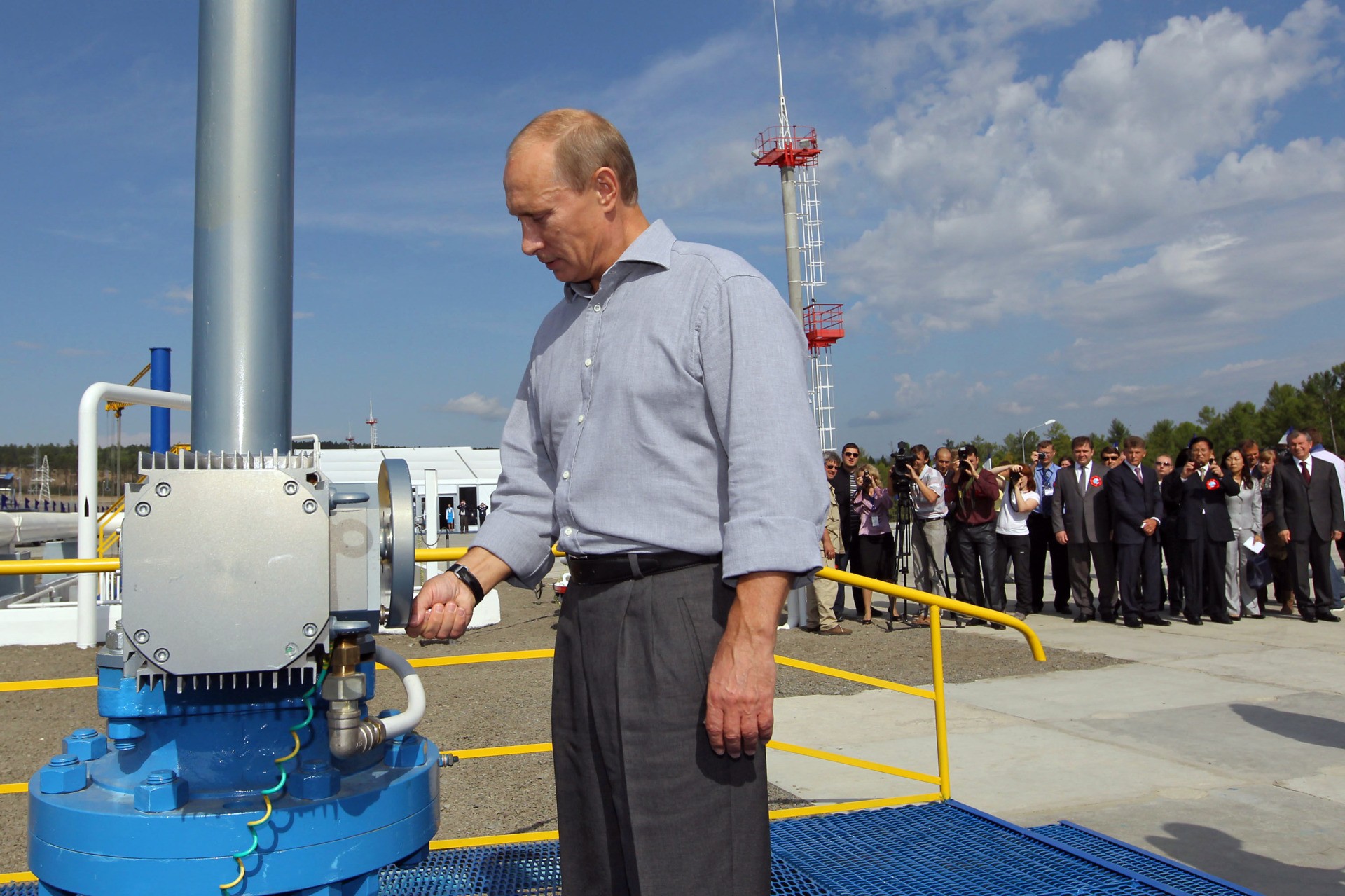 Vladimir Putin opens a throttle during the opening ceremony for the Russian section of the Russia-China oil pipeline in the far eastern region of Amur on August 29, 2010. (ALEXEY DRUZHININ/AFP via Getty Images)

And why are the Europeans so energy dependent? Well, mostly because they have chosen to go ecological; Europeans, inspired by visions of green goodness, have reduced their own carbon-extraction, and, at the same time, two European countries—Belgium and Germany—are shutting down their nuclear power plants.

Instead, the Europeans plan to power their economy on wind and solar. (Although in the meantime, on their way to the green promised land, they say they’re using Russian gas as “a bridge.”) Yet this green new deal is not working, because wind and solar simply lack the needed ergs. In the words of energy expert Rupert Darwall, “The European Union is a paper empire.”

Such weakness has strategic implications, including right now with the Ukraine crisis; in Darwall’s words:

The dilemma for the West: you can’t win a geopolitical conflict lasting years or decades with an economy powered intermittently by wind turbines and solar panels . . . Geopolitical realism requires energy realism.

Yet energy realism is precisely what the Europeans have lacked; they have let themselves be led by the likes of Greta Thunberg. As one wiseguy tweeted recently, “I don’t know, maybe taking global energy advice from a scowling teenage girl wasn’t the best idea after all.” 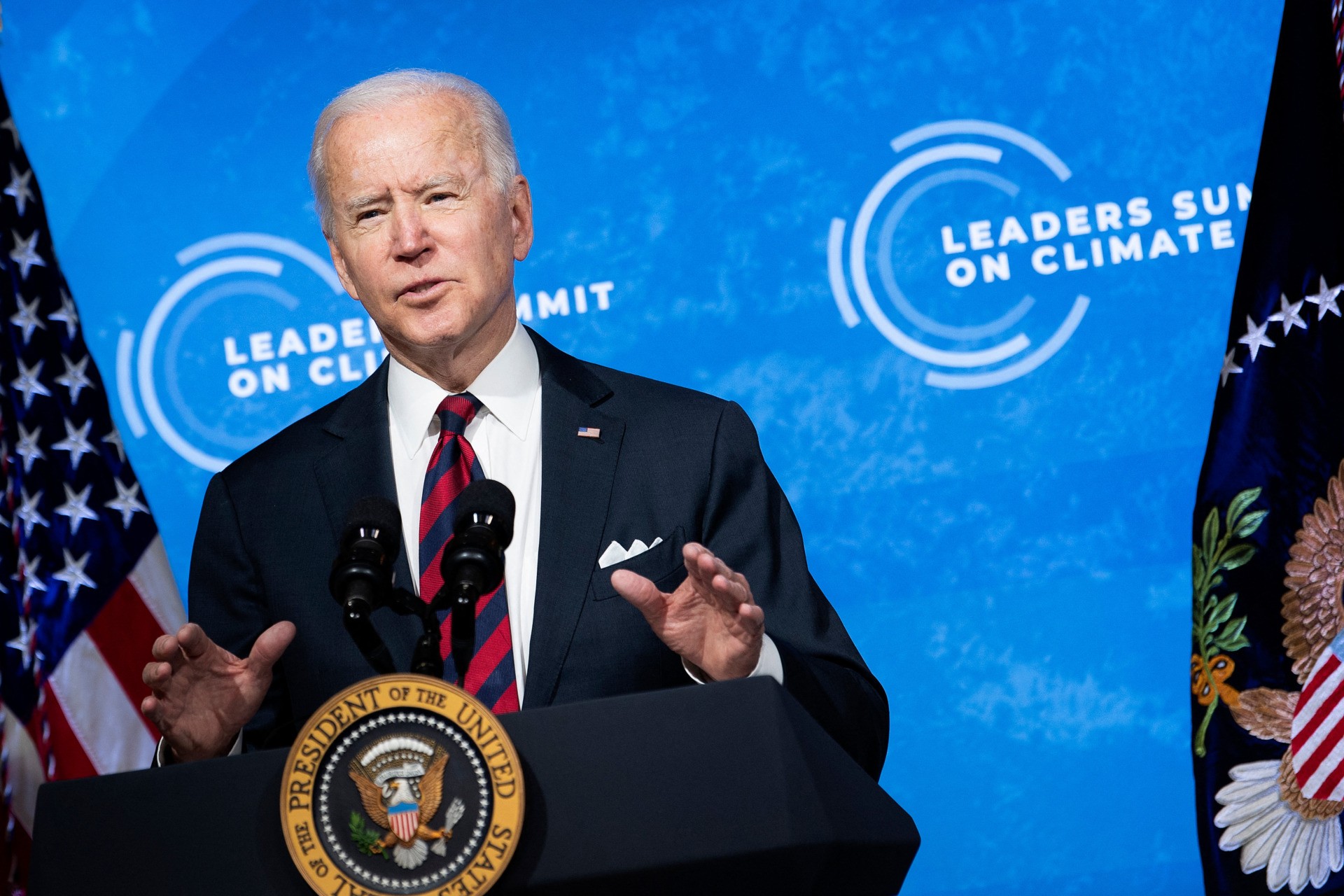 President Joe Biden speaks during a climate change virtual summit on April 22, 2021, in Washington, DC, where he promised to slash U.S. greenhouse gas emissions by 50 to 52 percent by 2030. (BRENDAN SMIALOWSKI/Getty Images)

Unfortunately, there’s plenty of Thunberg-like unreality, too, on the American side. Biden’s billionaire climate envoy, John Kerry, he of the many private jets and homes, is always doing his best to bring European fantasy values to the U.S. In the last few days, Kerry has been saying that even as Russian soldiers kill innocent people in Ukraine, he trusts that Putin will still abide by climate limits. (These limits were always jokes to the Russians.) For his inevitably obtuse take on world events, Kerry is a perennial contender for upper class twit of the year,

One final irony here is that for all the greens’ precious fantasies, as a matter of reality, their policies are making the atmospheric carbon dioxide issue worse. Nobody knows how much Russian military adventurism has contributed to atmospheric CO2, because the Russians have yet to file any environmental impact statements and have not allowed either Thunberg or Kerry to do an assessment. And yet we do know that the Russian T-72 tank gets about .8 miles to the gallon. And the mileage of a MiG-35 fighter jet is even worse. 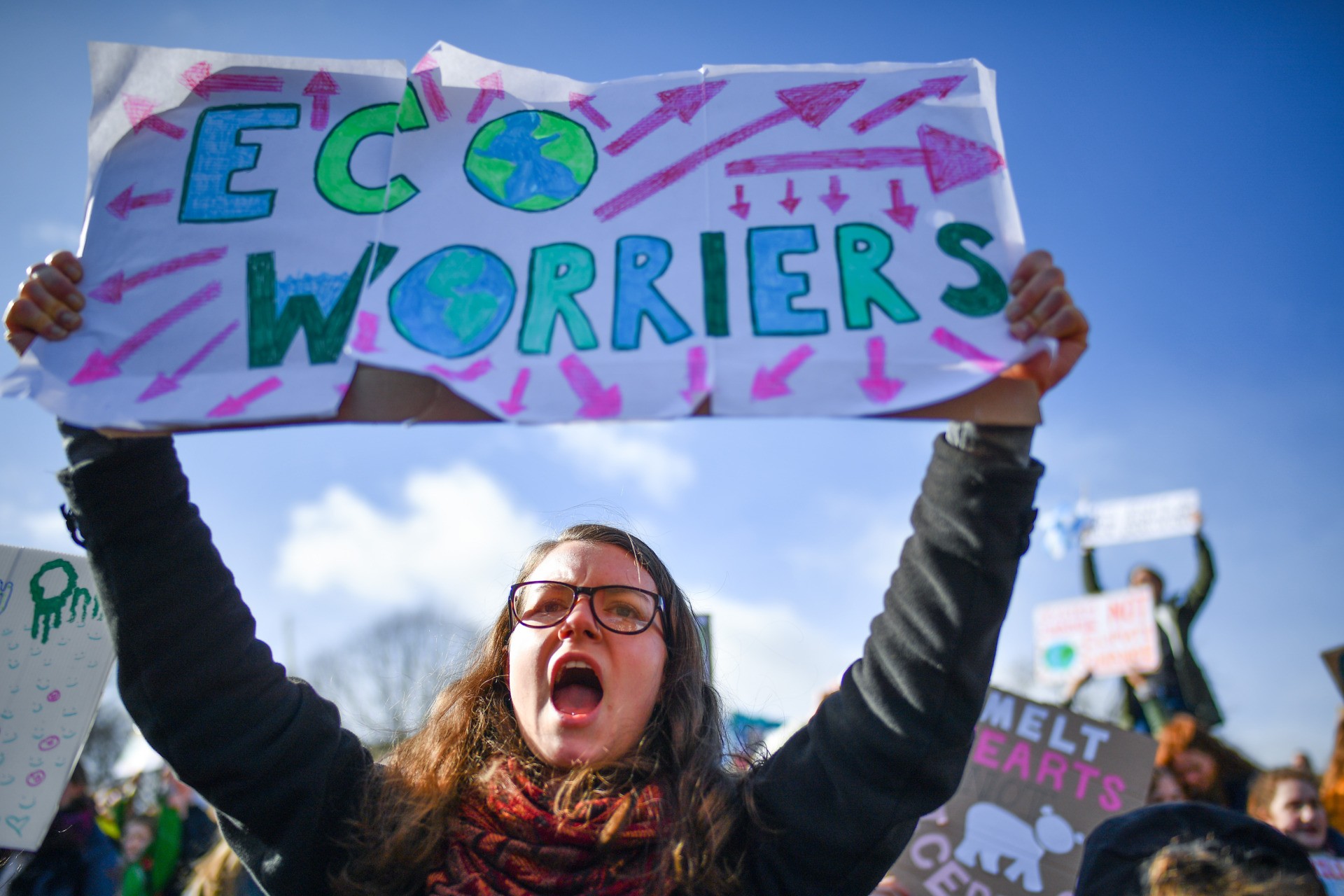 Students hold placards and shout slogans during a protest for climate change outside the Scottish Parliament on March 15, 2019, in Edinburgh, Scotland. (Jeff J Mitchell/Getty Images) 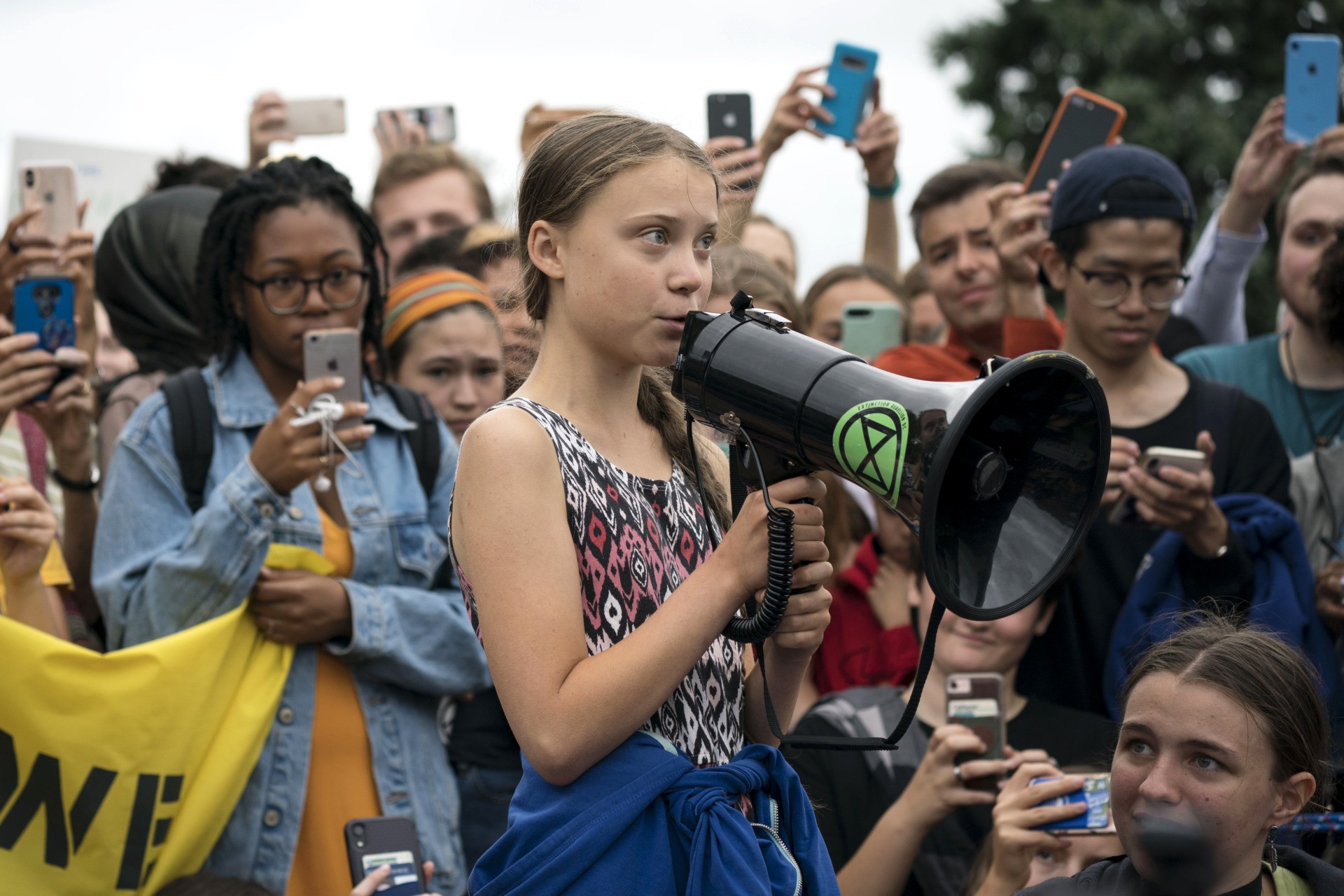 So that’s the depressing present. It’s as depressing under Biden today as it was under Jimmy Carter half a century ago. Yet if we need some cheer, we might look back and see how a Republican president undid the damage done by that earlier Democrat.

When Ronald Reagan was inaugurated on January 20, 1981, he inherited a weak U.S. energy position, palsied by price controls. Carter had not imposed those controls, and yet he championed them, even as he sought to pile yet more regulation and taxation on the energy industry.

Yet paradoxically, during Carter’s presidency, oil prices had gone up, from less than $14 a barrel on the day Carter was sworn in, January 20, 1977, to $38 a barrel on the day he left office, four years later. Why? Because while U.S. production was shrinking in response to price controls, worldwide demand was surging, and there were no price controls on foreign oil. So it was simple: less supply + more demand = higher prices.

One of the big beneficiaries of these higher prices was the Soviet Union—the old Russian Empire with a red flag—which, then as now, possessed huge energy reserves and a hunger for foreign conquest. Engorged with petro-wealth, the Soviets/Russians expanded during the Carter years, in Cuba, in Africa, and, most fatefully, in Afghanistan. So long as America was weak, Moscow could be strong.

Yet the strategic balance started to change on January 29, 1981, when President Reagan decontrolled oil prices. At the time, Democrats wailed; Sen. Howard Metzenbaum of Ohio called Reagan’s move a “tragedy.” And yet predictably, in the wake of decontrol, American production increased. Indeed, as world production rose as well, oil prices fell dramatically during Reagan’s presidency; by 1986, oil was as low as $10 a barrel.

This plummet in oil prices was catastrophic for the Soviet Union. As Russian journalist Georgy Manaev explains,“For the USSR’s economy—already accustomed to exorbitant incomes from its oil, this was a death blow. In 1986 alone, the USSR lost more than $20 billion (approximately 7.5% of the USSR’s annual income).” As economist Andrew Nikiforuk further explains, “When oil production, and its all-important revenues peaked, the Soviet Union lost the energy mojo that glued its empire together.”

We get the picture: If the Russians were riding high on high oil prices, then the way to bring them down was to cut the price of oil. And the way to do that was with more production. And that’s what Reagan did. 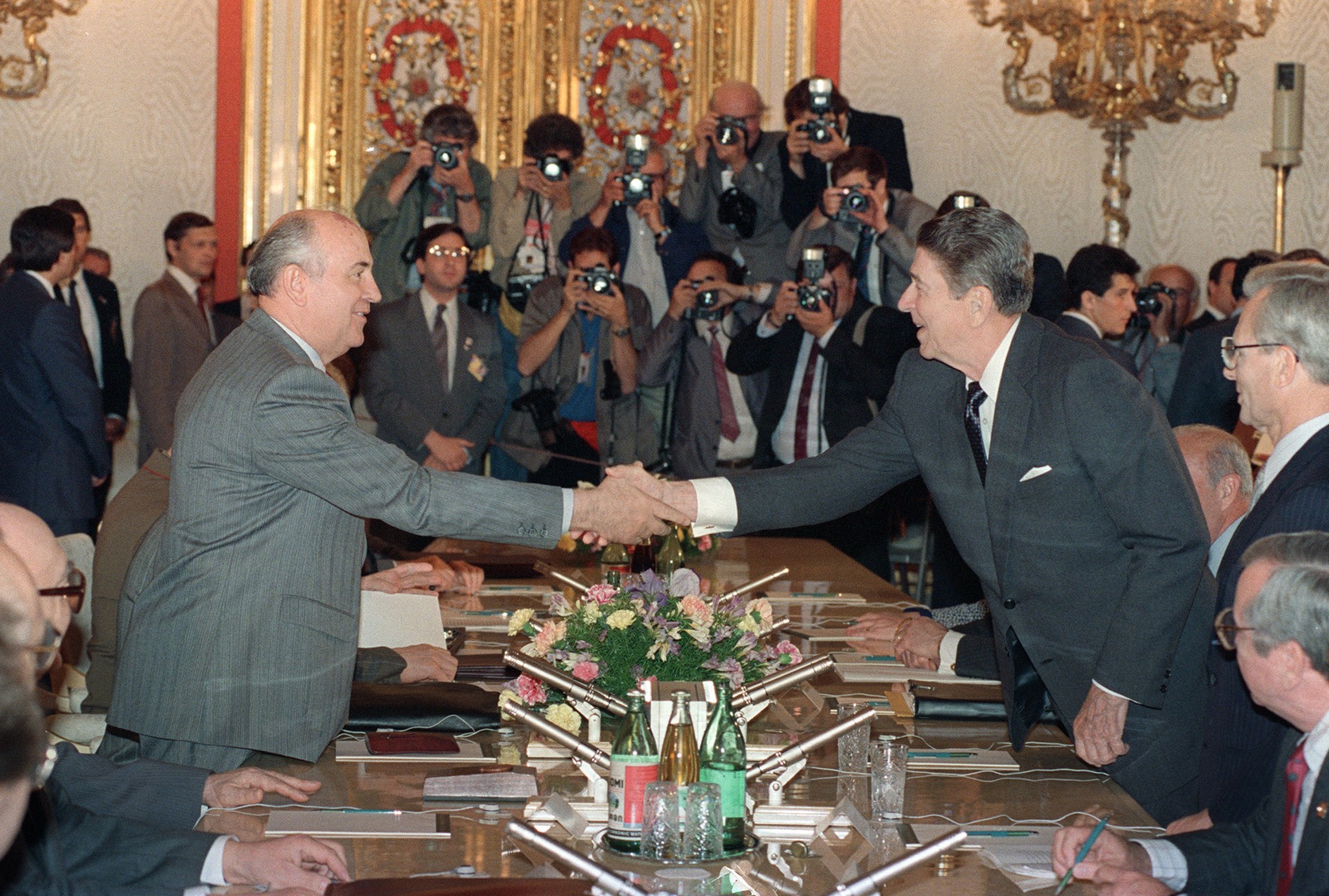 But let’s let President Reagan’s son, Michael Reagan, have the last word. Writing in 2014, at a time of another Russian-made crisis, when Putin conquered Crimea from Ukraine, the younger Reagan wrote:

I suggest that President Obama might want to study how Ronald Reagan defeated the Soviet Union.  He did it without firing a shot, as we know, but he had a super weapon—oil. … Lower oil prices devalued the ruble, causing the USSR to go bankrupt, which led to perestroika and Mikhail Gorbachev and the collapse of the Soviet Empire.

Not bad. Of course, any success attributable to Reagan is going to be lost on most Democrats. To such folks, Carter is still likely a hero. And so in their minds, there’s no reason to rethink their Thunberg-Kerry approach. Thus Sen. Chris Van Hollen, Democrat of Maryland, is happy to say that he has no regrets about shutting down U.S. energy and has no plans to open anything up. Thus Ukraine, and perhaps other countries on Russia’s hit-list, are to be sacrificed on the altar of environmental correctness. And at the same time, another Democrat, Rep. Brad Sherman of California, is urging a big foreign producer to increase its output:

Saudi Arabia – now is your chance to be an ally or an enemy of those standing against Russia's attack on #Ukraine. Saudi Arabia must open taps and produce more oil so the world can turn its back on Russian oil. Otherwise, the blood of Ukrainians is also on Saudi Arabia's hands.

That’s not a bad idea, as in addition to defunding Putin, we would all benefit from lower energy prices, including lower gas prices. However, it’s passing strange that Sherman would suggest to a foreign country that it produce more, while not taking the same suggestion about his own country, the United States.

Fortunately for America, Republicans are remembering their Reagan heritage. We should be, they say, in effect, the arsenal of energy. And so for instance, Republican Sens. Josh Hawley of Missouri, Tim Scott of South Carolina, and Bill Cassidy of Louisiana have all put forth plans for energy dominance—and plenty of other GOPers have the exact same idea.

Nobody wants American troops fighting in Ukraine. And history shows that we can beat the Russians the way Reagan did, without firing a shot.