Manufactured homes have long been a way for lower-income people to become homeowners but now this demographic is also feeling the pressure of rising costs and many fear for their future.

According to data from the U.S. Census Bureau, the average national price for a manufactured home rose almost 50 percent over the course of the pandemic, from $82,900 to $123,200.

The Washington Post interviewed Virginia Rubio, 75, who lives in a trailer park in Washington. Her rent has shot up from $350 to $1,000 a month. She owns the manufactured home but has to pay rent for the land it sits on.

“With an increase like this, I don’t know what we can do,” Rubio said. “We’re all afraid of losing our homes.” 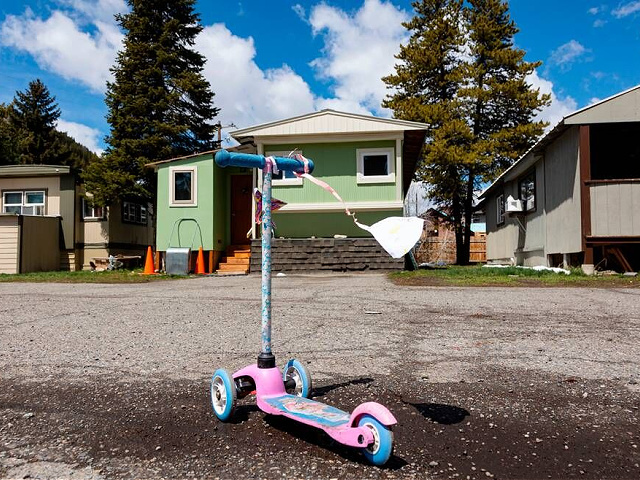 A child’s scooter is parked in the parking lot of J&J Trailer Park in Ketchum, Idaho, on Sunday, May 1, 2022, when residents had a rally to ask for more time to move. (Sarah A. Miller/Idaho Statesman/Tribune News Service via Getty Images)

The Post spoke with manufactured homeowners who are not immune to the skyrocketing cost of real estate and the effect of investors gobbling up more and more of the housing inventory, including mobile home parks:

Surging home prices and rents are cascading down to the country’s mobile home parks, where heightened demand, low supply and an increase in corporate owners is driving up monthly costs for low-income residents with few alternatives. At the same time, private-equity firms and developers are often circling nearby, looking to buy up such properties and turn them into more lucrative ventures, including timeshare resorts, wedding venues and condominiums.

Private-equity firms including Stockbridge Capital, Carlyle Group and Apollo Global Management have been rapidly buying up mobile home parks over the last decade, often using funding from government-sponsored lenders Fannie Mae and Freddie Mac. Once they take over, one of their first moves is to raise rent, said [Kate] MacTavish.

MacTavish is an associate professor at Oregon State University whose research focuses on affordable housing and trailer parks.

In interviews with a dozen mobile home residents around the country, all said their rents had risen this year. Most reported increases of 10 to 25 percent, although some said monthly payments had doubled or tripled. Their options were increasingly limited, too: Many said they had bought trailers after being priced out of apartments, homes and condominiums and were now unsure of where to go next. They had used up their savings or taken on high-interest loans to buy manufactured homes with little resale value. Some were considering moving into motels, crashing with friends or living in their cars until they could find a more permanent arrangement.

The Post reported that federal data show that 20 million Americans live in mobile homes, which is about six percent of U.S. residences.