Walker’s campaign asked, “Is there anything more Washington?” after Politico reported Warnock spent his campaign money on a lawsuit filed against Warnock in 2021 related to unsubstantiated allegations from many years ago during his time as pastor of Ebenezer Baptist Church.

The outlet described the legality surrounding Warnock’s use of his campaign money as a “gray area.”

“Georgians sent Raphael Warnock to Washington to represent them, and instead he spent his donors’ money to cover his personal legal bills,” Walker spokeswoman Mallory Blount said in a statement provided to Breitbart News. “Raphael Warnock was involved in a lawsuit, which had nothing to do with his work as Senator and he used his campaign dollars to cover his legal troubles. Is there anything more Washington?”

Campaign finance law does not permit the use of campaign funds for personal matters unrelated to an individual’s candidacy for federal office or position as an officeholder.

Warnock, however, used his campaign firm Elias Law Group, as well as Krevolin & Horst, for a case filed in April 2021 by Atlanta resident Melvin Robertson relating to Warnock’s work as a longtime pastor of Ebenezer Baptist Church dating as far back as 2005, Politico reported. 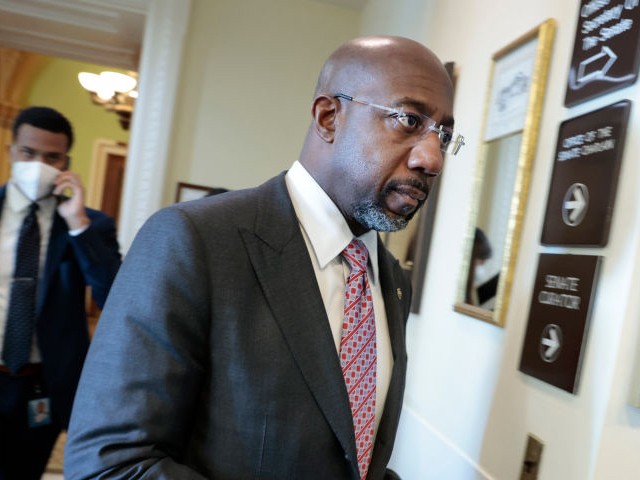 Robertson initially filed a related lawsuit in 2019 against Warnock — who became a candidate for federal office in 2020 — but that lawsuit was dismissed, according to Politico.

Warnock believes using donor money for this particular lawsuit is “permissible” given his position as senator, and his attorney, prominent Democrat election lawyer Marc Elias, told Politico the use of the campaign funds is “completely legal and appropriate.”

Warnock’s campaign has paid Elias’s law firm tens of thousands of dollars since last fall, though it is unclear how much of that money was used toward the current Robertson lawsuit.

Walker, a well-liked former Georgia football star, is hoping to unseat Warnock in a tight Senate race in Georgia in November that could determine which party holds the upper chamber majority next year.

The National Republican Senatorial Committee (NRSC), which is targeting Warnock as vulnerable in his race, blasted the Georgia Democrat for using campaign funds as a “piggy bank for his personal expenses.”

“Seldom held accountable for his misconduct, Senator Warnock operates under the assumption that no one will bat an eyelash at the flurry of lawsuits in which he is currently embroiled – and that he can illegally use campaign funds as a piggy bank for his personal expenses,” NRSC spokesman T.W. Arrighi said in a statement. “The shine is fading from the media’s darling as people realize that not everything is on the up and up with Raphael Warnock.”