WASHINGTON, DC – The Supreme Court heard arguments in a major case involving would-be homeowners being threatened with millions of dollars of fines if they ever build their house in a case on the reach of the federal government, as Justice Ketanji Brown Jackson participated for the first time on the nation’s highest court.

“It’s now going on 16 years since Petitioners Mike and Chantell Sackett began construction of a house on a vacant lot in a largely built-out subdivision,” lawyer Damien Schiff from Pacific Legal Foundation began. “Yet, their home-building plans remain on hold to this day because EPA remains steadfast in its view that their property contains navigable waters, subject to regulation under the Clean Water Act. But under no plausible interpretation of that term does the agency have such authority.”

That captures the essence of the entire two-hour argument. The Environmental Protection Agency (EPA) said that this land-locked parcel in a residential neighborhood included vegetation associated with federally protected wetlands under the Clean Water Act (CWA), and therefore that the Sacketts could not build on their lot.

This is the Sacketts’ second trip to the Supreme Court, as a decade ago the question was whether they had the right to sue at all when the EPA threatened them with more than 30,000 dollars of penalties per day if they did not abandon their plans to build a house.

The Supreme Court ruled 9-0 that the homeowners had standing to sue. Monday’s argument was the result of another ten years of court battles.

In this week’s fight, the justices struggled with the current test under the CWA of whether a given parcel of land has a “significant nexus” to navigable waters, which is a test that former Justice Anthony Kennedy invented almost two decades ago in a case called Rapanos.

When Schiff argued that adjacent “clearly means physically touching,” Chief Justice John Roberts – a possible swing vote – pushed back, saying “you would readily say that a train station is adjacent to the tracks even though it’s not touching the tracks.” 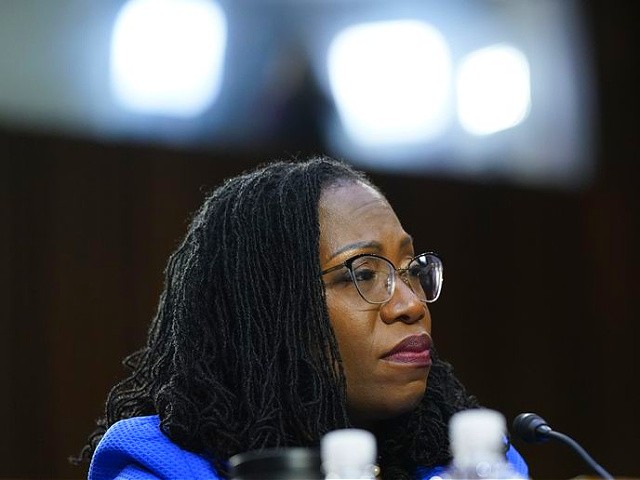 Justice Jackson was aggressive in her questioning on her first day on the Supreme Court bench. When Schiff said that decades ago the court has said the relevant term in the CWA was “unenlightening” in terms of deciding this sort of case, Jackson responded with, “let me try to bring some enlightenment to it,” and pressed Schiff aggressively with a series of questions and comments on Congress’ objectives for the CWA.

For example, when Schiff talked about Congress “balancing concerns” in the CWA, adding that federalism is “one of the purposes” of that law, Jackson pushed back with a perspective associated with liberal justices, saying, “I didn’t see that as … a main objective with respect to the [CWA].”

Justice Brett Kavanaugh – who like Roberts is seen as a potential swing vote on this case – noted that longstanding agency interpretations say that “adjacent wetland includes those wetlands separated by berms, dunes, dikes, or levies from the navigable water,” asking how much weight the Supreme Court should give such a longstanding view.

Justice Neil Gorsuch seemed especially concerned about how hard to understand some of EPA’s requirements are, and that a citizen could end up in prison if EPA’s power sweeps as broadly as the Biden administration claims it does. “So, if the federal government doesn’t know, how is a person subject to criminal time in federal prison supposed to know?,” he asked Deputy Solicitor General Brian Fletcher.

Kavanaugh echoed these concerns regarding “potential criminal liability” for crossing an EPA line, saying that the part of the CWA that allows prosecution for merely being negligent “is a red flag.”

Ever the principled originalist, Justice Clarence Thomas noted that the EPA was focused on a large lake that is 300 feet away from the residential lot, and asked if a “purely intrastate” body of what can be part of “navigable bodies of water be waters of the United States,” because Congress’ constitutional power is only to regulate interstate commerce.

But none of the other justices voiced support for probing whether the CWA could even be constitutionally applied to this sort of situation.

In sum, it appeared that a majority of the justices might be inclined to say the Sacketts have a right to build their home, though the prospects of victory are clouded by the difficulty in how to apply the “significant nexus” test, or what they could replace that test with to provide clarity and predictability in determining the limits of the EPA’s power.

Breitbart News senior legal contributor Ken Klukowski is a lawyer who served in the White House and Justice Department.