Do Americans still like a fighter? What happened to the mantra of “Rugged Individualism?” Well, if the reaction to a certain incident that happened a while ago in the Rose Garden is a metric, that sentiment is still alive. But is must be rekindled if we are to save America from those who hate it.

Here is my first SubStack piece on the Rumble in the Rose Garden and what it means to you.

It’s the one moment in my 14 years in America that seems to resonate most with people. That “incident” in the Rose Garden of the White House when a “journalist” challenged me to a fight. And I responded.

What really happened and why is it a perfect microcosm of our situation as a nation?

I was no longer working for President Trump, but as the host of a national radio show and with a healthy following on Twitter, FB, etc. I was invited to President Trump’s Social Media summit.

About 300 pro-American “influencers” (hate that word!) were invited to meet with the President and talk about the challenge we face in a world where 90%+ of all social media platforms are owned and operated by leftwing CEOs and boards who are happy to delete the account of anyone they politically dislike. Including a chief executive with more than 90 million followers.

After the closed session, some of the President’s guests were invited outside into the Rose Garden to hear a special address by the President and the Attorney General.

At the end of the formal remarks, the AG and President Trump left the podium and Brian Karem, the Playboy and CNN “correspondent” for the White House, shouted a rude remark at the departing President before he stepped over the rope cordon and delivered a very strange insult – concerning demonic possession – to all of us seated there in the garden. (You can hear and see it all here, thanks to my quick-witted former Green Beret weapons sergeant buddy Jim Hanson, who instead of whipping out a claymore or M-79 Blooper, filmed the whole exchange on his phone). 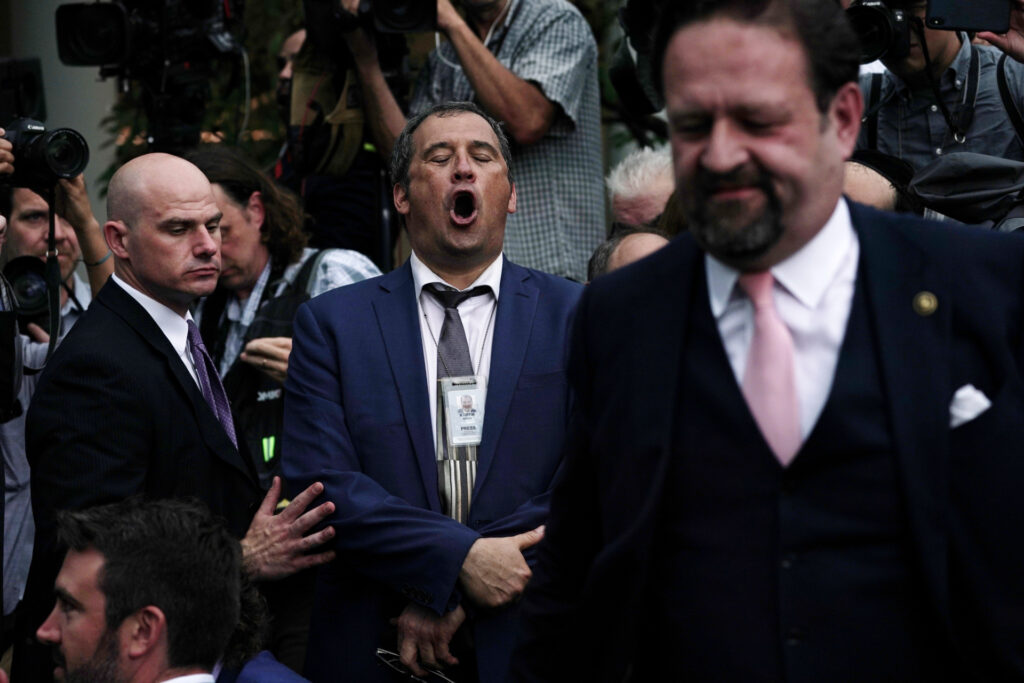 WASHINGTON, DC – JULY 11: Brian Karem of Playboy Magazine (2nd R) argues with conservative military and intelligence analyst and former deputy assistant to President Donald Trump Sebastian Gorka (R) after the President made a Rose Garden statement on the census July 11, 2019 at the White House in Washington, DC. President Trump, who had previously pushed to add a citizenship question to the 2020 census, announced that he would direct the Commerce Department to collect that data in other ways. (Photo by Alex Wong/Getty Images)

Karem was possibly under the influence and angry that he was behind the cordon and not one of the President’s actual guests, I guess.

After he insulted us, I suddenly recognized who was hurling abuse, the same reprobate who perennially insulted my friend Sarah Huckabee Sanders when she was at the podium as Press Secretary. And that was the “trigger.” Literally.

I jumped up and sped my way over to Karem, rather loudly called him out for being a “punk,” not a journalist, to which he challenged me to a fight. Yup standing in the Rose Garden, thirty yards from the Oval Office, with the Secret Service standing right next to him doing nothing.

Karem shouted “Go home Gorka!” (I’m an immigrant), and lastly, said I should “get a job.” Which is weird, since I have several whilst, apparently, Karem is not currently employed. (He seems to have a history of getting fired after insulting American Presidents. No really).

I’m no presidential historian, but that may have been the first “almost fight” in the Rose Garden. But that’s not the reason I believe the event has significance. Nor is the fact that the mainstream media, of course, distorted all their reporting that day by omitting the footage of Karem’s insults prior to my full-throated response.

The question I think that really matters, is why people still bring it up to me, years later. Why does my getting in the face of an insulting loser “journalist” matter to people so much? What does it represent behind the incident itself?

Because people have had enough. And they like to see a fighter finally fight.

Don’t get me wrong. I’m no Hercules or James Reece. The most fun I had wearing a uniform were the few years I spent in the British Territorial Army, many moons ago. 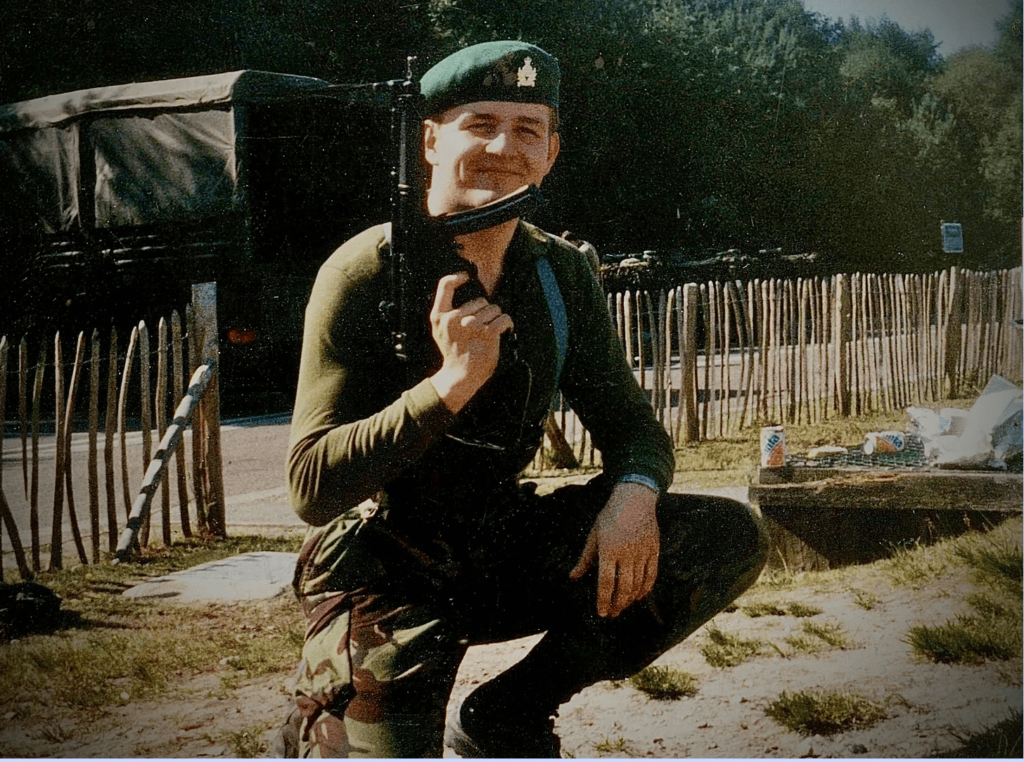 Yes that is me. A long time ago, in a galaxy far, far away. The British Territorial Army Intelligence Corps, to be exact
Courtesy of Dr. Sebastian Gorka

But I think, anyone who has followed me in the last few years will agree that I have developed a reputation for being, let’s say, “combative.” Whether it’s telling Anderson Cooper live on CNN just how pathetic his network is, or calling out the Obama counterterrorism policy as lethally wrong-headed jihadi appeasement. That’s what I do. It’s how this immigrant with the funny accent rolls.

As the child of these who suffered under Fascist dictatorship, and then were persecuted under a Communist regime, I have my own political “baggage.” When I see rampant lies being propagated, lies which endanger and weaken the fabric of America and even endanger us, I’m not interested in pussyfooting around the important issues, or just being “nice.” America doesn’t have time for nice. Just look at the last few years.

It’s not just the likes of General Mike Flynn or Steve Bannon who are being assailed by a politicized executive and Federal law enforcement. Recently a pro-life father of seven was just raided at his home by two dozen FBI agents armed with AR-15s pointed at his wife as his children screamed. The charge? Shoving a foul-mouthed pro-abortion activist who was hurling abuse at his 12-year-old son. (An accusation that had already been dropped by a local court). Or how about the DoJ colluding with the National School Board Association to use the Patriot Act’s counterterrorism authorities to “investigate” American parents who simply want their children to go back to school? None of these perversions of our judicial and law enforcement system would suggest to me that we should “play nice.” When the FBI is a political cudgel for one party we are beyond the bonds of politeness and regular political decorum.

The fact is one of our two national parties has been radicalized into an extremist organization. When the incumbent President stands in front of the building in which our founding documents were debated and formulated, lit in dark red, flanked by the U.S. military and calls 74 million Americans a “threat to democracy” we need to fight back. Politics as usual is not enough. The Marquis of Queensbury rules so respected by establishment conservatives will no longer suffice. Everyone who cares about the future of the greatest experiment in democracy must become a truth-teller.

For many years, I would react badly to my fellow American Conservatives when they said Socialism, or even Communism, is coming to America. I would tell them what real Communism looks like, tell them about the scars on my father’s wrists from where his arms were bound with wire behind his back, so he could be hung from the ceiling of secret police torture cell. I don’t do that any more.

I know, I know, we don’t have an official secret police, or torture chambers. (Although if you ask several of the January 6 inmates, you may change your mind on even that). But we are marching toward something that is more authoritarian than not. Roger Kimball refers to this process as the sovietization of American politics. Emily Finley has given the tactic employed to target those who dare disagree with the reigning power “democratism.” Under this strategy the “elite” decides what democracy means and if you disagree then you automatically become a threat to democracy. Simple. Authoritarian, but simple. The will of the people is the problem. So Biden, Pelosi, and AOC will decide what the people’s will should be. And if you don’t agree with their definition of America wants, well the FBI is available, as will be the soon to be hired extra 87,000 IRS agents.

In the face of all this people respond atavistically to someone they see standing up to the abuse. That’s the appeal, I believe, of what I did in the Rose Garden. And that’s largely the appeal of my former Boss. Being pugnacious when the world is clearly insane and the “elite” is making things worse is automatically attractive. Mean tweets? Yes please if it means no war in Europe, inflation under 2%, gas under $2 a gallon, a secure border, a growing 401K, and children not being sterilized in the name of “inclusivity.”

So what are you going to do about it? Be polite? Hold your tongue? Or tell the Truth and get politically involved? I mean, it’s only the country we’re talking about.