Senator David Perdue (R-GA) told Breitbart News Sunday in an exclusive interview that President Donald Trump will probably not sign another spending bill that does not include funding for his proposed southern border wall.

“The next bill has got to have the border wall in it or the president’s probably not going to sign it,” Perdue told host Amanda House.

“I won’t say what the president will or won’t do — that’s not my place and I certainly don’t know — but, I do know this, I’ve talked to him personally about how upset he was with the current spending bill, his first instinct was to veto it.” 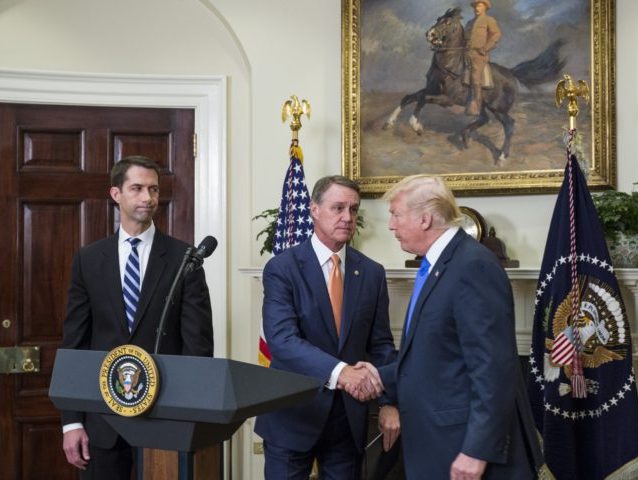 Senator David Perdue shakes hands with President Donald Trump during an August 2017 announcement on the introduction of the Reforming American Immigration for a Strong Economy (RAISE) Act. Perdue and Senator Tom Cotton (R-AR) (right) co-sponsored the legislation which would overhaul U.S. immigration by moving towards a merit-based system. (Photo by Zach Gibson – Pool/Getty Images) 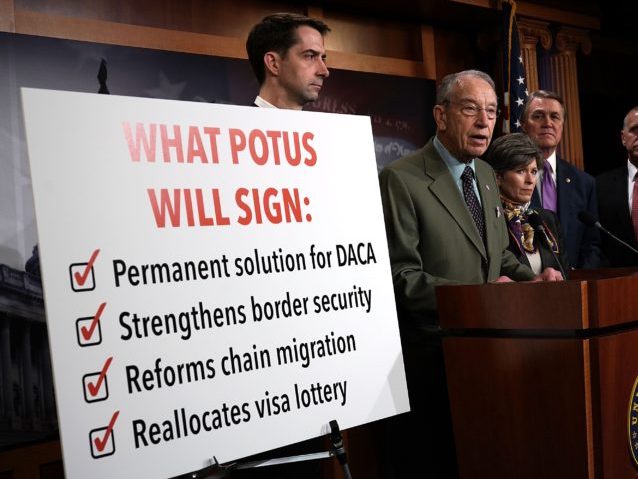 Perdue, along with other Republican lawmakers, held a press conference this month to promote the #MakeCongressWorkAgain campaign, calling for Senate Majority Leader Mitch McConnell (R-KY) to expedite Senate floor proceedings before the August recess to pass a spending bill and confirm President Trump’s pending nominees.

“[Congress] simply has to do its job. Now, having said that, I’m on the budget committee and the budget process is broken. There is a select committee that’s been formed by Paul Ryan and Mitch McConnell and it’s eight Democrats and eight Republicans and we are working feverously right now to try to change how the budget process works. That is a great contributor to the fact that the Congress just doesn’t fund the government.”