Darby was live on the scene in Tijuana Friday night with his colleague Robert Arce to report on the Central American migrants encamped in the border city waiting their turn to request asylum at the U.S. port of entry in California.

“In talking with people, among other things, we learned that they are in fact marching again tomorrow morning to the border,” reported Darby. “We had reported earlier that agitator groups were trying to rile the migrants up to go to the border. Many of the migrants have already left here, and Mexico is putting them in an inside-shelter — a shelter that’s enclosed — maybe some 45 minutes away, and there are buses coming [and] taking people, but a lot of people chose to stay here because some of them believe that Mexico is taking them to be deported and it’s a trick, and others are staying here because they’re going to march again tomorrow. So we can expect to see some of what we saw last week possibly happen again tomorrow. They are, in fact, planning on marching.”

“A lot of sick people,” said Darby. “A lot of people wearing masks. A lot of people coughing.” He added, “I see most of the Mexican police here are  wearing face masks. A lot of the migrants are wearing face masks. Everywhere I go, people are coughing and sneezing. There’s a lot of sick people here, which I think can be expected any time you have so many people living in … abnormally cold weather. It’s been in the 40s, 50s, and low 60s. There’s been a lot of rain and moisture, which is abnormal. They’re living in a flooded situation, a lot of water, a lot of backed up portable toilets … so the conditions are very bad. … It’s really the filthiest stuff I’ve ever seen, and I’ve been in a lot of places. … These are pretty heinous conditions.” 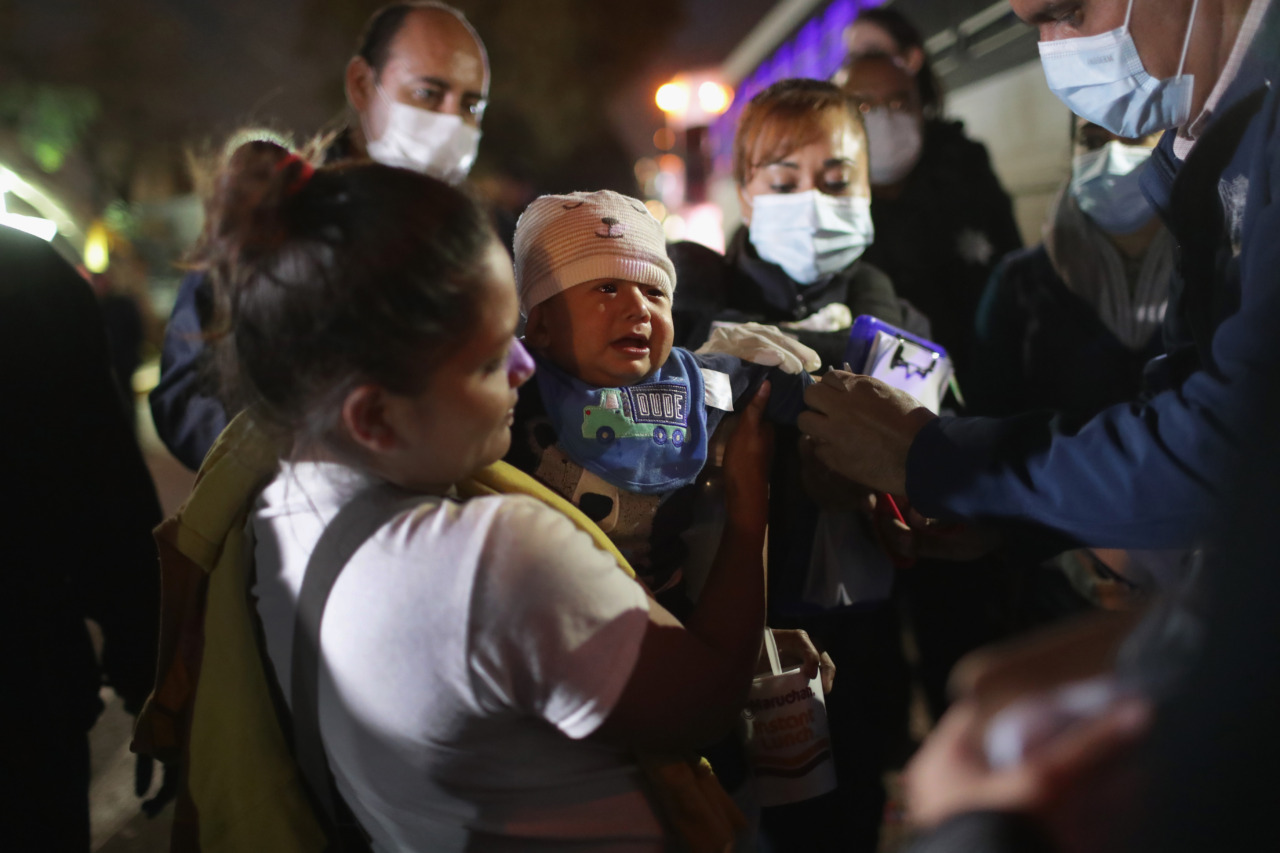 Police check members of the migrant caravan as they board a bus to a new temporary shelter on November 30, 2018 in Tijuana, Mexico. Authorities closed a squalid open-air shelter next to the U.S.-Mexico border fence and bussed thousands of migrants to a different facility, further away from the border. (John Moore/Getty Images)

Brandon continued, “Lots of mostly young men, but there still are — I’ve seen — hundreds of children, babies, and mothers. It’s a pretty intense experience, and most of the people have been very nice. Some of them, I think, gave me a sketchy feeling. We saw a couple of people with a lot of tattoos and facial tattoos and what have you who have been deported from the U.S. because they were criminals, but most of the people we’ve seen have been very nice to us.”

Darby stated, “A lot of [migrants] described to us that this [caravan] started because of something going on in Honduras with the Honduran president, and that someone connected to the president said they were taking 150 migrants to Mexico City with him, and they asked for 150 people to come down, and then thousands came, and then they marched on together. … They felt like they would have typically went to the Texas border to get into the United States. Many of them have been in the United States before, but they said that they were told by the organizers who were connected to the Honduran president — according to them — they were told to come to Tijuana. So they’re here.”

Mansour asked who the caravans organizers are and if any non-governmental organizations (NGOs) are involved.

Darby replied, “What people here are saying is that it is a former Honduran senator who is part of Pueblo Sin Fronteras, who is connected to the Honduran president. That’s why they’re saying they initially came, because those people were organizing a caravan to Mexico City. That’s what they’re saying sparked this initial movement.”

Darby noted how many migrants felt deceived by the caravan’s organizers.

“[The migrants] were told something different,” explained Darby. “They were told that they were going to come, and it would be easy, and they would get into the U.S., and that’s not what’s happened. They were lied to by the organizers, is what they’re saying. … They talk with us and say, ‘We were lied to.'”

Darby described the emotional dimension of observing children and babies in hardship within the encampment.

“A little kid in their pajamas just ran through latrine filled with sewage and came up to me and said hello,” relayed Darby. “I’m going to tell you, when you’re in the encampment and you’re looking at the kids [and] the babies, it definitely doesn’t feel great to be here. Let me put it that way. Obviously we can’t take all the world’s problems, or we’ll sink. But I’ll just tell you, when you’re here, it’s a little difficult to think of the political justification for it. It’s a little difficult, because you realize that if we take the whole world and we allow this, then it’s going to keep happening. … But when you’re just here looking at the little kids, and the trash, and how bad it is, it’s difficult. I’m really trying to give straight facts, but when a little kid steps in sewage and then comes up to you with a big smile and says hello, it kinda messes with you.” 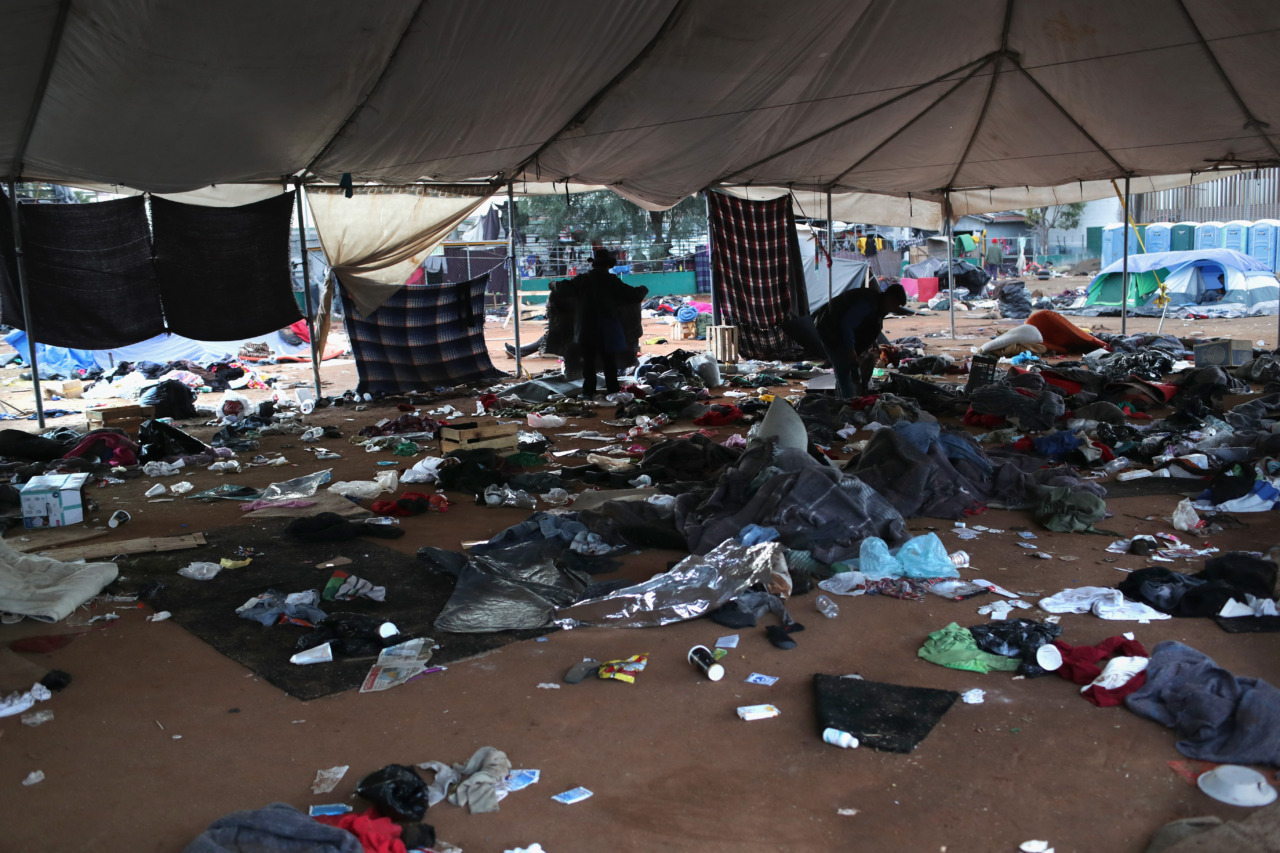 Members of the migrant caravan scavenge in the debris of an open-air shelter which had flooded in heavy rains on November 30, 2018 in Tijuana, Mexico. (John Moore/Getty Images)

Darby added, “It’s really sad, because … I’ve met some kids that in the ten- and eleven-year-old range, and they looked like they were about six, and that’s, I think, because of the malnutrition issue. I’m seeing a lot of that. I met a couple of men who were my age, and I thought they were 60 or 55. One of the hardest things is seeing kids who look a lot younger than they really are, and it has to do with what they’re getting to eat.”

Mansour asked Darby if women and children were being used as “human shields” by the caravan’s organizers.

Darby replied, “What folks have said to me here is that they felt like they should send women and children because federal authorities would not fire upon women and children, or shoot pepper balls or whatever at women and children, but people in the group said, ‘No, we’re all equal, we’re all in this together, and we shouldn’t do that by gender.’ So they ended with everyone going at once, but apparently the men were able to get there first.”

Most migrants Darby spoke with explained their migration motivations as economic.

“The majority of [migrants] talked about economic situations,” remarked Darby. “From my understanding, that’s doesn’t actually fault under our asylum laws. Some of them talked about the political situation, gangs, and crime, but most of them simply talked about poverty and not having enough food [and] wanting a better life. … The majority of them are just really straight up that they’re coming here because they’re poor, they don’t have food, and they want to have a better life. … The vast supermajority of people I’ve spoken with didn’t even brought up politics, at all. They brought up food, and they brought up having a better life [and] resources.”

Darby said the Mexican citizens of Tijuana are mostly unsympathetic to the migrants.

“Other than talking to one liberal journalist, I’ve yet to meet anyone from Tijuana who is okay with what’s occurring,” he said. “Most of them say, ‘I worked really hard and I had to go through a lot of things to get a work permit in the U.S. to get to legally go to the U.S. It’s not fair that these people show up. … Most of the people I’ve encountered here who are not in the caravan are not sympathetic with them, at all. And that was kind of surprising to me.”

Darby said the majority of migrants he saw are men. “I would say the majority of people I see are men, but not a vast majority,” he observed. “Maybe for every ten men I’m seeing, I’m seeing maybe four or five women and children. It’s not a supermajority. It’s probably 50-something percent male.”

Mansour asked what the migrants intend to do on their next march to the southern border.

Darby answered, “I don’t know. I’d imagine it’s very similar to what happens in any protest. In any march, there are going to be people there to march and be seen and remind the U.S. media that they’re there and not to forget that this is happening, and then I’d imagine others in the groups are going to be violent, aggressive, and break through. That’s historically what happens.”