Buffalo Bills field goal kicker Dan Carpenter’s wife got a bit aggressive in her tweeting on Monday night after Seattle Seahawks cornerback Richard Sherman jumped offsides in an attempt to block a kick and ground Carpenter into the turf in the process.

Fans and the media criticized Sherman for making a late hit, suggesting that he could have avoided leveling the 30-year-old veteran place kicker. “I went to block the kick,” Sherman said. “I’m not going to let him make a kick. So when they called offsides I’m not going to let them have their free play — that’s not how I play.”

Sherman added that the refs hadn’t blown the whistle so he kept charging. “I went straight for the ball. I didn’t go for the kicker. I slid for the ball,” he insisted.

Kaela Carpenter responded tweeting a message suggesting that back on the farm there are ways to deal with overly aggressive males. She then tweeted a picture of a contraption used to castrate    out of control male animals. 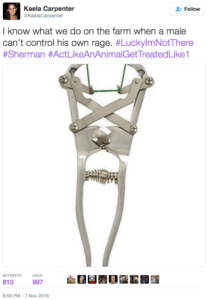 Kaela’s response might have been harsh, but for reporter Harry Lyles Jr. at SB Nation it was much more than that. More than a sarcastic troll. This was blatant racism.  Lyles writes:

Lyles suggests that Mrs. Carpenter and others are tone deaf to the “brutally dehumanizing racism of the not so distant pas[t],” and “Her words are what we have been trying to escape for over 400 years.”