In an op-ed at the Star Tribune this week, the medical professionals – pediatricians and those treating gender dysphoric youth in “gender clinics” – called the legislation a “hateful distraction, an imagined problem created only to politicize the lives of transgender youths.”

The authors defended males in girls’ and women’s sports with a statement denying the existence of evidence that boys and men “have any type of biological advantage over” girls and women. The authors do not cite specific studies to support their claims.

In 2019, a study at BMJ Journal of Medical Ethics found male athletes claiming to be female hold an “intolerable” advantage over biological female athletes.

Three professors — two in bioethics and one in physiology — noted in the BMJ that the International Olympic Committee (IOC) initially allowed transgender women to compete against biological females if their testosterone is below 10 nmol/L. The researchers found, however, even that level is “significantly higher” than that of biological females. 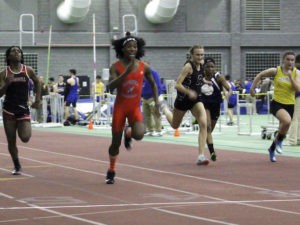 The authors cited research demonstrating that “healthy young men did not lose significant muscle mass (or power) when their circulating testosterone levels were reduced” for 20 weeks to meet the IOC’s guidelines.

The researchers also stated that “indirect effects of testosterone will not be altered by hormone therapy.”

“For example, hormone therapy will not alter bone structure, lung volume or heart size of the transwoman athlete, especially if she transitions postpuberty, so natural advantages including joint articulation, stroke volume and maximal oxygen uptake will be maintained,” they explained in the BMJ article.

“We conclude that the advantage to transwomen afforded by the IOC guidelines is an intolerable unfairness,” the researchers asserted.

Another study, conducted by the Karolinska Institute and Linkoping University in Sweden, showed biological males identifying as women still held “considerable advantages over biological females in strength and muscle mass, even after a full year of hormone therapy,” as Breitbart News reported.

The researchers concluded, “after 12 months of hormonal therapy, a transwoman will still likely have performance benefits over a cis-woman.”

Despite such evidence, the pro-transgender doctors wrote in the Star Tribune that increasing state legislation seeking to keep girls’ and women’s sports for biological females will only harm “an already marginalized population” with a “high risk of poor mental health outcomes when they are not supported in their gender identity, with suicide attempts as high as 14-49%.” The doctors did not cite studies to support this claim.

In August, however, the American Journal of Psychiatry released a correction to a 2019 Swedish study that concluded that individuals claiming to be transgender experience mental health benefits following gender-affirming surgeries.

The American Journal of Psychiatry noted the authors of the original study retracted their conclusion after numerous requests for a reanalysis of the data led to the corrected findings.

Despite the growing number of bills targeting transgender youths in sports, there is no evidence that transgender girls playing on girls’ teams is harmful or detrimental. In fact, the creators of these bills themselves are unable to find examples supporting their case in the state of Minnesota. This fabricated problem is based on the bigotry and fears of anti-trans activists.

Is there danger in erasing biological sex? To ensure the health and safety of children, it is critical to acknowledge the innate difference between males and females.

The executive director of the American College of Pediatricians, Cretella asserted pediatricians who have been “brave enough to proclaim authentic science and adhere to the ethics of first do no harm will champion these pro-children pieces of legislation by making the following points”:

The feminist organization Women’s Liberation Front (WoLF) has also voiced strong opposition to allowing men and boys in women’s and girls’ sports, and spaces such as bathrooms and locker rooms:

Who would take their kids to pediatricians who think that accurately describing a child’s sex is “disparaging,” and don’t understand why boys shouldn’t be allowed to undress in front of girls? https://t.co/Fe5Z6QPByl

“Doctors shouldn’t be in the business of prescribing a loss of civil rights and privacy for girls as a mental health treatment for their male patients,” WoLF executive director Natasha Chart said in comments to Breitbart News.

She elaborated regarding the op-ed written by the gender clinic doctors:

Who gave them the authority to shift responsibility to the rest of us for patient care needs that they seem to be having trouble meeting in their own practices? If they have a young male patient with complex needs, those needs should be met by their guardians and physicians, not foisted off onto their female peers.

Chart observed that pediatricians “need to know the sex of a child in order to know if their patient is thriving and meeting developmental milestones, or in order to prescribe them appropriate and effective treatments.”

“If these doctors think that it’s disparaging to identify the sex of a child, what are they putting down on their patient charts at the office to ensure there aren’t clinical mistakes?” she asked.