CARACAS – Venezuela is celebrating its best Olympic performance ever, forcing the athletes to publicly pick sides between the Venezuelan people and the regime oppressing them.

The delegation, composed of only 43 athletes, marks Venezuela’s smallest Olympic group in 20 years. The team has been able to accrue one gold medal and four silver medals despite its lack of official support from the socialist regime — and yet, the Bolivarian Revolution seeks to pass off these hard-earned triumphs of Venezuela’s athletes as its own.

There are many contrasting stories amidst Venezuela’s new medal bearers, tales of perseverance against all odds that are inexorably tied to the economic and societal collapse of the country’s socialist government and to a regime that will exploit any chance to capitalize on them. When weightlifter Julio Mayora earned Venezuela’s first Tokyo 2020 silver medal on the 28th of July, for example, the country found itself celebrating and rooting for the athlete.

Moments later, in a brief video recording, he dedicated his victory to Hugo Chávez, posthumously given the title of “Supreme and Eternal Commander of the Revolution” in 2013. His victory coincided with the socialist regime’s celebration of Hugo Chávez’s July 28 birthday, a date that’s all but an official holiday for Venezuelan socialists — and the regime was not going to let the opportunity go to waste.

In the video posted to social media, Mayora is seen conversing with socialist dictator Nicolás Maduro under the watchful eye — and instructions — of Venezuela’s Sports Minister Melvin Maldonado. In a statement, Mayora stated that he wishes to exchange the medal for a house for his mother.

Many have questioned the earnestness of Mayora’s claim given the obvious pressure on him. Some suggest the conversation was forced, paralleling the events surrounding Belarusan sprinter Krystina Timanovskaya, who had to seek asylum in Poland after she criticized her country’s coaches on social media. But not all athletes chose the route that required submission to the socialist regime.

Take, in contrast, Venezuelan boxer Eldric Sella. Sella’s tale serves as a grim reminder of Venezuela’s ongoing migrant crisis, as Sella, who fled from Venezuela in 2018 to Trinidad & Tobago, competed under the Refugee Olympic Team. His olympic dream only lasted 67 seconds, as he was defeated by the Dominican Republic’s Euri Cedeno. 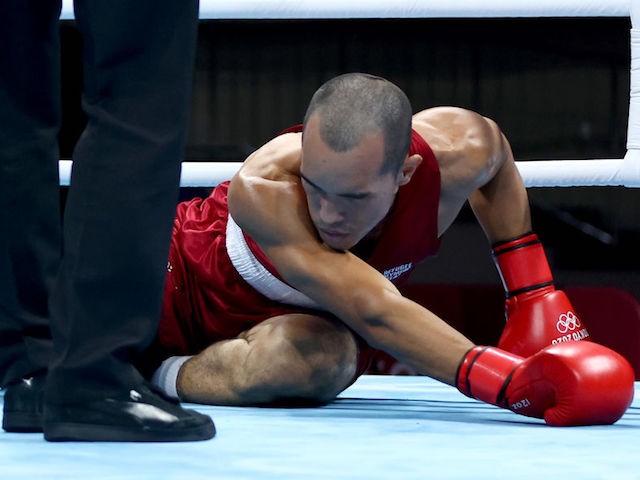 Eldric Sella Rodriguez (red) of Refugee Olympic Team is knocked down by Euri Cedeno Martinez of Dominican Republic during the Men’s Middle (69-75kg) on day three of the Tokyo 2020 Olympic Games at Kokugikan Arena on July 26, 2021 in Tokyo, Japan. (Photo by Buda Mendes/Getty Images)

“I continue to represent my country, those who left and those who are [still in Venezuela],” Sella stated. Sella humbly apologized for his resounding defeat and now finds himself unable to return to Trinidad & Tobago. The United Nations refugee agency is seeking for a solution to Sella’s case — an act that drew the ire of Venezuela’s foreign Minister, Jorge Arreaza, who accused the U.N. agency of using Sella against Venezuela.

Yet no footage exists of Sella enthusiastically endorsing the regime that forced him, and 5.4 million others according to the United Nations, out of their home country.

The socialist regime’s lack of support to the nation’s athletes is reflected in the story of Paola Pérez. The Venezuelan swimmer ranked #20 in the Women’s 10km swimming competition despite not going through the adequate training that her peers received.

Pérez had to go to great lengths to reach Tokyo 2020. She was forced to migrate to Chile, as there were no open pools in her native Táchira state to practice. She worked as a swimming instructor to cover her training expenses. After the Chinese Coronavirus pandemic forced her to return to Venezuela, she had no choice but to pay 10,000 Colombian pesos per day to be able to train for up to three hours daily at a pool operated by the Venezuelan military.

Due to the lack of support from the Venezuelan regime, she had to launch a GoFundMe campaign just to be able to reach Tokyo.

This is not the first time Pérez participates in an international event without support from the Venezuelan government. During the 2019 Pan-American Games held in Lima, Peru, Pérez had to compete without the proper swimming attire required for cold weather, nearly succumbing to hypothermia.

While she did not win any medals, Pérez earned the universal support and admiration of her citizens.

There are more stories of Venezuelan success during this Olympic venue, such as Keydomar Vallenilla’s silver medal in the Men’s 96 kg Weightlifting category and Daniel Dhers’ silver medal in the Men’s BMX freestyle. During his mandatory conversation with Nicolás Maduro, Dhers did not refer to Maduro as “President” and did not give praise to the revolution nor Maduro. The Venezuelan BMX rider counts with private sponsorship and built his career in the United States, establishing his own Sports Complex in Raleigh, North Carolina.

Venezuela is a country that doesn’t get to win much these days, and the socialist regime that continues to subjugate our lives has left us embittered, polarized, and shattered. So when Yulimar Rojas set a new world record and earned a gold medal in the Women’s Triple Jump category the country was justifiably jubilant, even if for one brief afternoon.

Over the past years, Rojas, who resides in Guadalajara, Mexico, has offered plenty of messages of support and praise of Hugo Chávez. In 2020, she stated that Hugo Chávez “always had love towards sports,” and in a more recent interview she claimed that “Hugo Chávez was the pillar for sports to reach the lowest levels and that children see it as important for human values.”

As part of attributing the victories of Venezuela’s athletes to the Revolution, and in an utter display of socialist sycophancy (one that we’ve grown desensitized to after two decades of Bolivarian Revolution), former Venezuelan sports minister Pedro Infante proudly stated that Nicolás Maduro is the president that has “earned the most [Olympic] medals,” attributing the medals earned by Venezuelan athletes during Rio 2016 and Tokyo 2020 to the notoriously unathletic Maduro himself.

The entire narrative of the socialist regime “supporting” the Venezuelan athletes fell apart due to one live TV mishap that occured on the afternoon of August 4. During a live broadcast in the State-owned TVES channel, a representative of Venezuela’s National Sports Institute highlighted the individual effort of the Venezuelan athletes that made it to Tokyo 2020 despite the lack of official support from the Venezuelan regime. Outraged by the response given, the interviewer abruptly demanded to either change the answer or change the question, as the honest answer given would “get him in trouble.”

The interviewer was not aware that the cameras were still broadcasting live and everyone got to bear witness to the ordeal.

It is worth mentioning that the Venezuelan regime built TVES using seized assets and broadcast infrastructure taken from the private RCTV channel, forcefully shut down by Hugo Chávez in 2007.

Beneath the absolute and unmitigated disaster that is Venezuela these days (or what’s left of it) following the collapse of the once celebrated 21st Century Socialism — deep down, beyond the blackouts, the shortages, the gasoline lines, the inflation, the lack of health access, the fact that we’re stuck with two presidents that nobody wants or likes, stripped of opportunities, and all of our other maladies factored in, these tales of success and perseverance are something that I hope leaves my generation with an optimism that we so desperately need.

Sure, it won’t fix this country anytime soon, but this is a rare sensation. To be once again proud of your nation, even if it’s for just one brief moment, is something that’s so rare these days.

Perhaps, should a time come where Venezuela is free from the clutches of the socialist regime that has brought so much ruin over the past two decades, athletes will once again receive all of the support required from the country, and who knows how far they’ll end up reaching.