On Tuesday, the Brooklyn Nets decided to ban star Kyrie Irving from the team until he gets vaccinated. Unfortunately, he has also been abandoned by his teammates, who have remained silent during his fight for his liberty.

Irving has insisted that his vaccination decisions are not for the NBA, his team, or the City of New York to mandate and has stood for his liberty as an American citizen to make his own medical decisions.

But on Tuesday, Nets General Manager Sean Marks announced that Irving would be benched for the season unless he takes one of the various coronavirus vaccines. Irving’s decision to forego the vaccine “restricts his ability to be a full-time member of the team, and we will not permit any member of our team to participate with part-time availability,” Marks said.

If Irving were to stay an active player, he would have missed at least half the season because he would not be able to play home games in New York or Los Angeles because both cities have enacted requirements that athletes be vaccinated.

According to the Athletic, Irving has told teammates he is not anti-vax. Still, he is against the idea that he should be forced to undergo any medical procedure because authorities have told him to do so. To Irving, this is a matter of individual liberties and human rights.

Sadly, as the leftist media establishment has gone all in to attack Irving and other unvaccinated players, Irving’s teammates have mostly remained silent about the whole situation.

Indeed, at least one has attacked Irving, though anonymously. According to Rolling Stone’s Matt Sullivan, one teammate scoffed that Irving is the “enigma of the century” for refusing the vaccine.

Regardless, none of his teammates — especially influential players Kevin Durant or James Harden — have come out in support of Irving’s drive for his human rights. In fact, without saying so directly, both Durant and Harden have said they’d like to see Irving “be on the team,” which would by necessity mean he’d have to get vaxed. And while these two Nets stars have not been openly critical of Irving, neither have they been supportive. At the very least, they have shied from any direct statement either way. And that offers Irving no support at all. 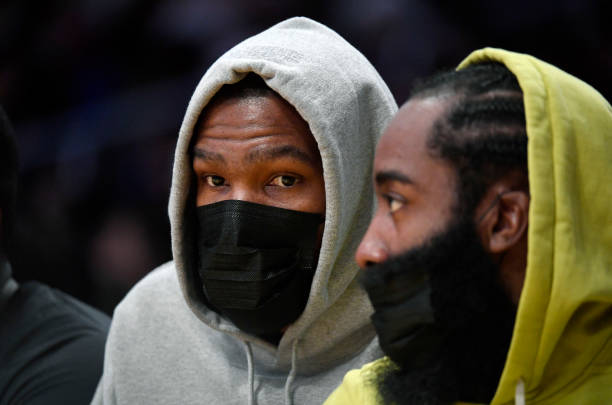 LOS ANGELES, CA – OCTOBER 03: Kevin Durant #7 and James Harden #13 of the Brooklyn Nets follow the action from the bench during a preseason game against the Los Angeles Lakers at Staples Center on October 3, 2021 in Los Angeles, California. NOTE TO USER: User expressly acknowledges and agrees that, by downloading and/or using this Photograph, user is consenting to the terms and conditions of the Getty Images License Agreement. (Photo by Kevork Djansezian/Getty Images)

If Harden or Durant were to support Iriving, maybe even say, “We Won’t play without Kyrie,” the Nets would have no choice but to back down.