Montana State basketball broadcaster Mark Martello was fired Monday for criticizing big cities such as Chicago and Portland for the liberal policies making them dangerous places to live.

In a Monday statement, the school said that a decision had been made to remove Martello from the Learfield broadcast team and that he would be replaced by Zach Mackey — at least for the rest of the 2022 season.

The school did not explain why Martello was fired, but he raised eyebrows for his comments during Saturday’s women’s basketball game between Montana State and Portland State.

But Martello himself said that Learfield Vice President of Broadcast Operations Tom Boman fired him after Portland reporter Joe Terry tweeted about the broadcaster’s comments during the game.

Made a reference to Portland being like the Southside of Chicago earlier in the game.

Seems an odd place to fire off political tales but here we are.

Martello, of course, could not deny the comments and took full responsibility for what he said.

“I am taking responsibility for what came out of my mouth,” Martello told 406mtsports.com on Monday. “I will miss the team and coaches. There will be no apology. No one was harmed.”

During the game, Martello alluded to Portland’s climbing crime rate, saying, “Ogele, from Saint Ignatius College (Prep) in Chicago, which is South Side. You’ve heard of (it). Portland not much different, I don’t think, these days.” 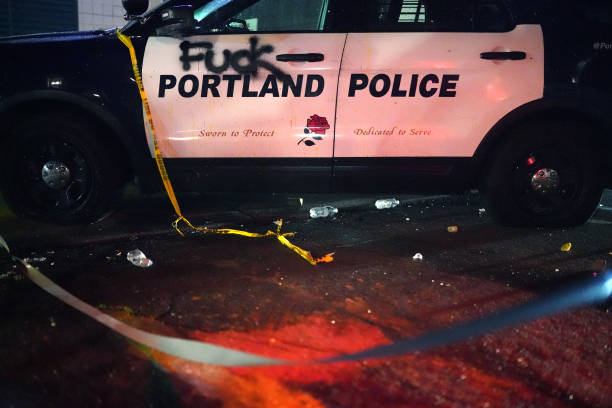 PORTLAND, OR – AUGUST 22: A vandalized police cruiser is seen here at the Portland Police Bureau North Precinct during a protest against police brutality and racial injustice early in the morning on August 22, 2020, in Portland, Oregon. Friday marked the 86th night of protests in Portland following the death of George Floyd. (Photo by Nathan Howard/Getty Images)

Martello next insisted that liberals in Portland can “get away with whatever they’re going to get away with” and then blasted the left-wing Antifa domestic terrorist group. “Portland’s like Antifa after a riot. They might go to jail, but they get out right away. They can get away with it,” he said.

Still, he immediately sensed he had stepped over the line and said, “Uh oh. I shouldn’t say stuff like that. I’m sorry.”

Martello blamed social media for the dust-up that got him fired.

“This is part of the world we live in, a big reason why I hate Social Media,” Martello told the radio station. “Dumb thing to say, maybe, but firing me represents MONTANA values? I think not. MSU promotes Portland values in Montana. Kneeling is fine, political warm-ups are no problem, but some radio yahoo making wisecracks is a capital offense. Everything I said was true. I guess the truth hurts.”

The Portland State athletic department also blasted Martello’s comments in a statement to the radio station.

“That type of commentary has no place in the description of a college basketball game,” the school said. “The portrayal of Portland State was both inaccurate and inappropriate. We appreciate that Montana State acknowledges that as well.”