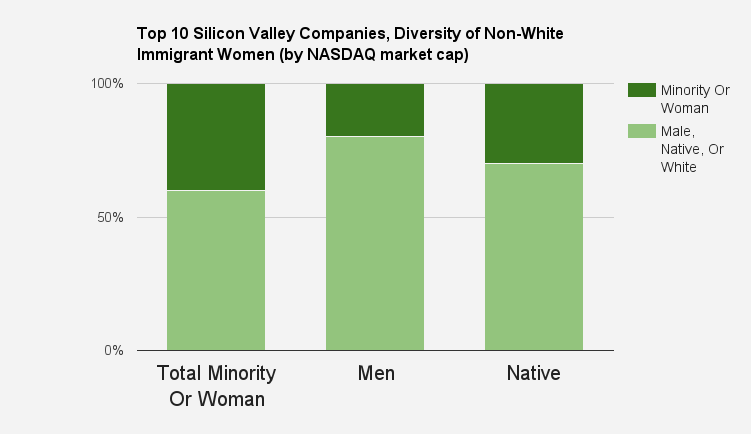 (Ferenstein Wire) – Silicon Valley often gets knocked for a lack of diversity, but historically excluded groups are making an impressive showing at the top spot of the most valuable companies. Just looking at the top ten companies based in Silicon Valley by NASDAQ market cap, 40% are run by someone who is a woman, an immigrant, or non-white. By individual demographics, 20% are women, and 30% are foreign-born.

Researcher and writer Vivek Wadhwa has shown that almost a majority (43%) of Silicon Valley companies founded in the last seven years had at least one immigrant founder. But diversity reports from tech companies show that overall, they are overwhelmingly white and male (usually around 60-80%). Interestingly enough, the CEO position seems uniquely welcoming to minorities in Silicon Valley.

Careful readers could critique the statistics presented. “Tech” is an ambiguous term. AT&T is a very valuable technology company, but not conventionally associated with Silicon Valley. There are also many tech companies that frequent the tech blogs not based in the Valley.

But even if we open it up to companies not based in the Bay Area, by some definitions, the numbers get a little better. Satya Nadella, CEO of Washington-based Microsoft, is another Indian-born American. Ginni Rometty of NY-based IBM is a female CEO.

Aside from those on the list, there are two more CEOs worth mentioning. Yahoo’s Marissa Mayer recently had a stock decline, placing her company in 11th in terms of market cap, but she’s still a notable figure in gender equality. The CEO of the most valuable company, Apple, is gay–another demographic that is not included in diversity reports, but has nonetheless historically faced discrimination.

To be sure, there is a lack of diversity within the range of minority groups. There is a conspicuous absence of black or Latino CEOs, even though both groups make up a substantial part of the U.S. There is no purely objective way to measure diversity in the tech industry, because both are fuzzy concepts. Whatever the definition of “Silicon Valley” includes, it’s clear that minorities are making strides in the tech industry, and immigrants, especially, have made valuable contributions to the U.S. economy.

There’s much more to go until the CEO spot is a true reflection of the American population, but that shouldn’t blind us to the progress being made.

Notable: Yahoo’s Marissa Mayer is at number 11 due to recent stock decline.