I recently reported on Freedom of Tweets, a campaign to support the legal fund of Toronto artist Gregory Alan Elliott, currently on trial for criminal harassment for disagreeing with feminists on Twitter. No, I’m not making that up.

Tomorrow, at 9am Pacific Time (12pm Eastern / 5pm GMT), I’ll be joining campaign co-ordinator Lauren Southern for a 6-hour livestream on my YouTube channel. We’ll discuss the Elliott case, compete over hair and hotness, and encourage our viewers to donate to the legal fund as the stream unfolds.

Our guests will include Gavin McInnes, one of the few badass Canadians I know. I’ll also be joined by YouTube sensation Sargon of Akkad, Reason columnist Cathy Young, and Tim Moen, the leader of the Libertarian Party of Canada, to name just a few. A full list of our guests can be found below.

But first, there is a graver matter to discuss. Such is my commitment to free speech on the web that I’ve made a pledge I might come to regret. I’ve agreed to sing the Canadian national anthem live, in front of the entire internet, if the legal fund breaks $25,000 by the end of the livestream. That’s right. Canada.

Assuming you want to see me suffer, like the ungrateful bastards I know you all are, you can donate here.

It actually could be worse than that. In a fit of selfless commitment to free speech, I allowed Lauren to talk me into a second pledge. If the fund breaks $50,000 by the end of the stream, I will sing a Celine Dion song. Yes, a Celine Dion song. Live. On YouTube.

I’m sure that won’t happen though. I’m sure the internet isn’t that determined to see me make a public spectacle of myself. My fans are nice, kind, sweet people, not heartless trolls who’ll donate to a free speech campaign just to see me humiliated live on air. I’m positive of it.

I will test my hypothesis tomorrow. Come join us. 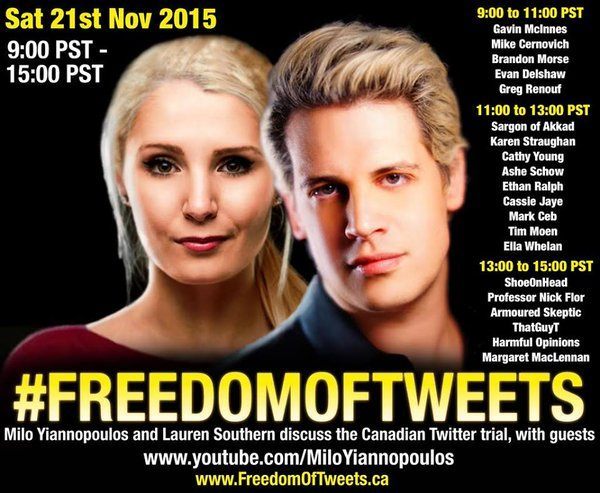