Star Wars Battlefront is a game reminiscent of the era before multiplayer games became weighed down by extraneous features and superfluous content. While it lacks a lot of the gilding we’ve come to expect from competitive shooters, this focus on the core experience had paid off in spades.

First things first. I’m a little bit of a Star Wars geek. I know that the Empire’s TIE Fighters are so-named because of their unique Twin Ion Engines, and that the X-Wing’s progenitor was the Z-95 headhunter, a cheap but efficient starfighter favored by militias and criminal elements before its design was upgraded for use by the Rebellion. I don’t know this because of a wiki, I know it because when I was eight years old, I read through a book of Star Wars “Vehicles & Vessels” with encyclopedic entries for every model in the canon and expanded universe. Straight through. For fun. If I were to express my true feelings in this review of Star Wars Battlefront, the review would read something like “STAR WARS STAR WARS STAR WARS LIGHTSABERS STAR WARS AAAAAUGH!”

My editors have informed me that this is unacceptable as a professional review. The following dissection of DICE’s Star Wars Battlefront is therefore intended to expound on these feelings in a way that involves less shrieking.

When I wrote about Battlefront‘s beta, I was enamored with its immediate grasp of the Star Wars universe’s atmosphere. The final release has a much wider array of content and for the most part continues to succeed in providing an immersive Star Wars experience. In a game based on such an iconic license, the struggle to keep people from comparing it to the original property is a very real concern. DICE has handled this as elegantly as anyone could hope for, but it’s not perfect.

Part of the problem lies in the reuse of its admittedly stellar assets. The Walker Assault mode on Hoth is gripping fantasy fulfillment, but Walker Assault on Tatooine or Endor feels odd. There isn’t anything wrong with the map or the mode per se, it’s just a strange juxtaposition of elements that can seem a little awkward. I’m glad each mode isn’t confined to a single map, but inevitably some are just better suited than others. 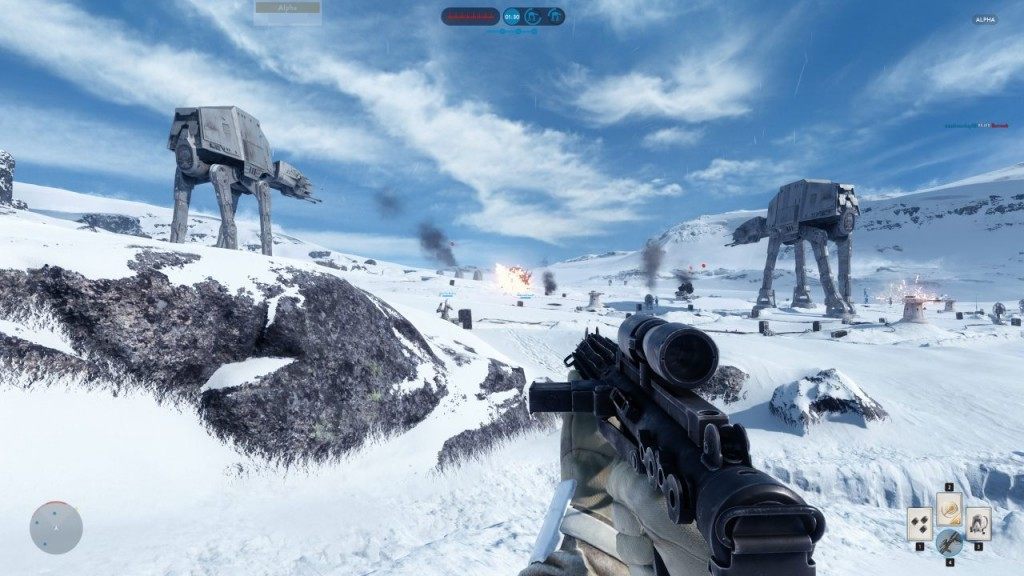 Other modes can be overly restrictive. You can play Cargo — Battlefront‘s Capture the Flag equivalent — in a variety of locales but never with more than half a dozen allies. The maps are smallish and pretty straightforward and missing most of Battlefront’s more compelling features in order to preserve a semblance of balance. Conversely, the Droid Run and Drop Zone modes have similar boundaries but don’t feel quite as compartmentalized because the stripped-down gameplay feels appropriate to the cramped, tense squad combat.

The larger modes fare better and feel like the crux of DICE’s Battlefront experience. This is where you’ll get the chance to utilize the full range of Battlefront’s features. If you can find the right little blue medallion, you can hop into the cockpit of an X-Wing or crush a larynx or two as the Dark Lord of the Sith. One of these things is totally awesome, and the other is… less so.

Vehicle control in Battlefront isn’t bad, but it’s also not very compelling. Like everything else in the game, they look and sound great but controlling them is a bit floaty, and it feels as if that inherent clumsiness is acknowledged by the choice to make all weapons able to be “locked” on your target. Much of the finesse and skill that has characterized games like X-Wing or TIE Fighter has been eschewed into a barebones version of Rogue Squadron. It’s certainly accessible, but it often feels as if your eventual demise had more to do with an enemy simply locking onto you before you had a chance to do the same.

Playing as an iconic hero or villain from the Star Wars universe, however, is incredible. The game feels remarkably different as soon as you step into the weathered boots of Han Solo or strap on Boba Fett’s rocket pack. When Luke Skywalker’s green lightsaber crackles to life in your hands, you will smile despite yourself. Aside from the obvious power trip, controlling these characters just feels great. A careless player will cut a swathe through his enemies but will still die in moments. Take your time to pick your battles, however, and Battlefront will make you feel like a virtual Jedi master. 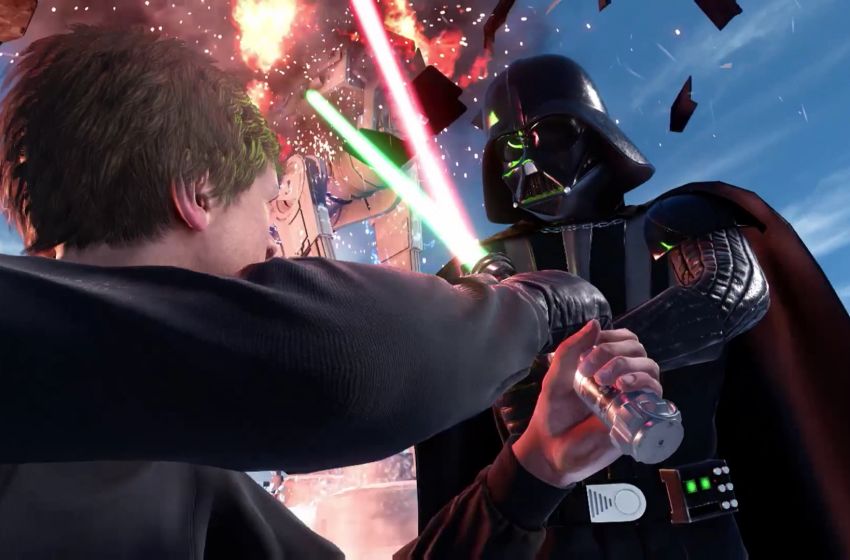 “Impressive. Most impressive. Obi-Wan has taught you well.”

When you’re not swooping about and laying waste to your enemies as a featured character, gameplay still holds up. It’s fast and frantic, and the armory is full of options. It’s nothing like the nigh-endless selection in Battlefield or Call of Duty, but unlike those games, each weapon and tool feels as if it has a unique identity and purpose. Where the equipment selection falters is in its progression and lack of customization.

Progression is a simple stream of unlockables as you gain rank. Experience is awarded in varying amounts for just about anything you do, so every playstyle will have the chance to advance. The problem is that most of the more interesting choices are locked behind at least 30 levels of grinding, and you won’t have full access until level 50. That’s par for the course in online competitive games, but the limited selection of items means that you’re doing a whole lot of grinding for one or two intriguing features.

There is also very little customization, to the point of feeling like an afterthought. Weapons cannot be tweaked or changed in any way, and personalizing your player character boils down to several different races, with or without beard. The same beard. For all of them. Unlocking the ability to have a different face costs more than most of the weapons, and unlocking that same face with that universal beard is an entirely separate — and equal — purchase.

All of these elements come together to create an experience that is undeniably Star Wars to its very core. Some features play out better than others, but the game never strays from its core objective. Like never before, Star Wars Battlefront makes you feel as if you are part of the mythos. For most of the people considering a purchase, that is the foremost condition. 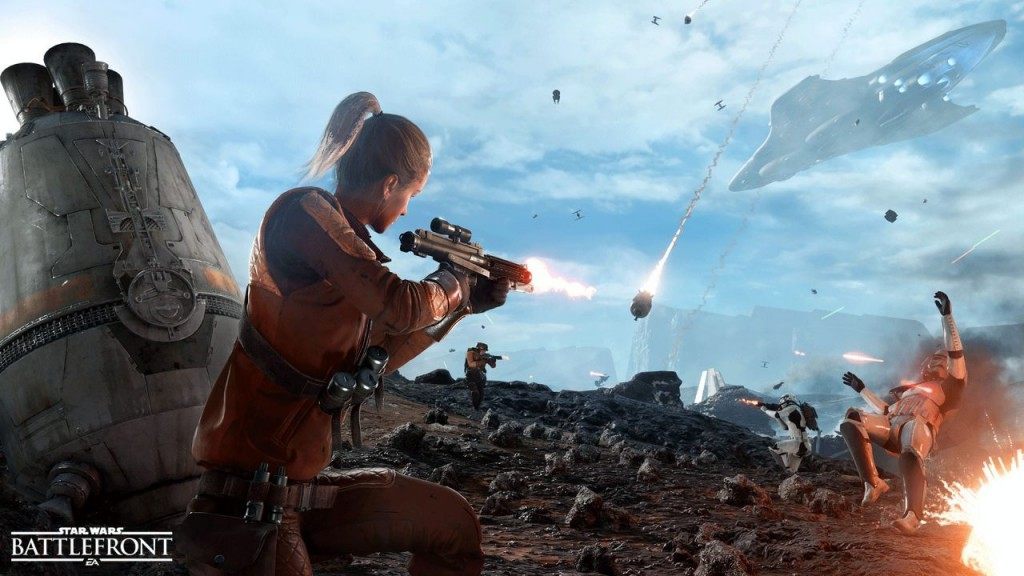 “What of the reports of the Rebel fleet massing near Sullust?”

In a weird way, what Battlefront does most of all is get me excited for the evolution of a resurrected franchise. Battlefront hovers on the precipice of greatness, held back only by its devout adherence to the idea of creating an experience that is just as inclusive as the Star Wars universe itself. While many people will decry the lack of sheer mass of content, what we have is a polished, distilled experience. And it’s a good one, no matter how long it lasts.

Keep in mind: If EA had advertised Battlefront as two sock puppets with photoshopped lightsabers on a fifteen second FMV loop, and priced it at 300 American dollars, I would have immediately turned to my wife and asked if the kids could skip dinner for a week or so to make sure I got it on day one. Your mileage may vary. If you want a focused, refined multiplayer experience that makes you feel like you’re re-enacting playing imaginary Star Wars battles of your youth, I’d recommend Battlefront. If the limited variety of content and lack of single-player campaign doesn’t sound like enough to justify a $60 purchase, wait for a sale.

The thing is, no matter how much I may criticize this game, or whether I’m still playing it into the wee hours of the morning, I know that every once in a while I just want to go to the galaxy far, far away. And in those times, I’ll turn on Battlefront as a gift to the dorky Nate from 25 years ago.

Nate Church is @Get2Church on Twitter, and he can’t become a wildly overhyped internet celebrity without your help. Follow, retweet, and favorite everything he says. It’s the Right Thing To Do™!