There are way too many shapes chasing me, and they’re all neon — which would make a really beautiful pattern if it wasn’t trying to kill me. I’m stuck between that, a giant bitmap UFO, and a gravity well that’s likely to eat all of us if I’m not careful. And I’m having asteroid flashbacks again.

All that’s keeping me from losing my last ship are my twitchy thumbs and my incredible piloting abil-oh, I’m dead. Then I start it all over again, because this is my (newly generated galaxy) and I’ll be damned if a bunch of shapes are going to take it over without a fight.

Gran Vitreous is a twin stick arena shooter from Heliocentric Studios with a randomly generated selection of levels and loot and a few action RPG mechanics. Do well, and you’ll improve your ship and your abilities enough to beat whatever the game throws at you. Do poorly and you’re dead. Do that too many times and you’ll have to start over. It’s not exactly an unforgiving game, but it certainly doesn’t hold your hand.

Gran Vitreous is Geometry Wars with looting and randomness in short bursts, and that’s a comparison made with love. It’s so close to homage at times that it borders on a lift in terms of general game-play — but the randomness, looting, and various weapons distinguish it from the Geometry Wars series pretty quickly. The game generates a galaxy to explore in short bursts instead of a more survival and high score set up, and the whole package works pretty well together.

You get a selection of random sectors in your generated galaxy, and each sector has a series of zones with different missions and events. In general you’ll be piloting your ship (using a twin stick gamepad hopefully, though the game’s mouse and keyboard set up isn’t the worst I’ve experienced) around the small, squared arenas taking out increasingly hellish patterns of ships, or a few bosses, to the game’s upbeat, dancy soundtrack. Beat a zone, and you’ll warp home with some credits and experience so you can level up. 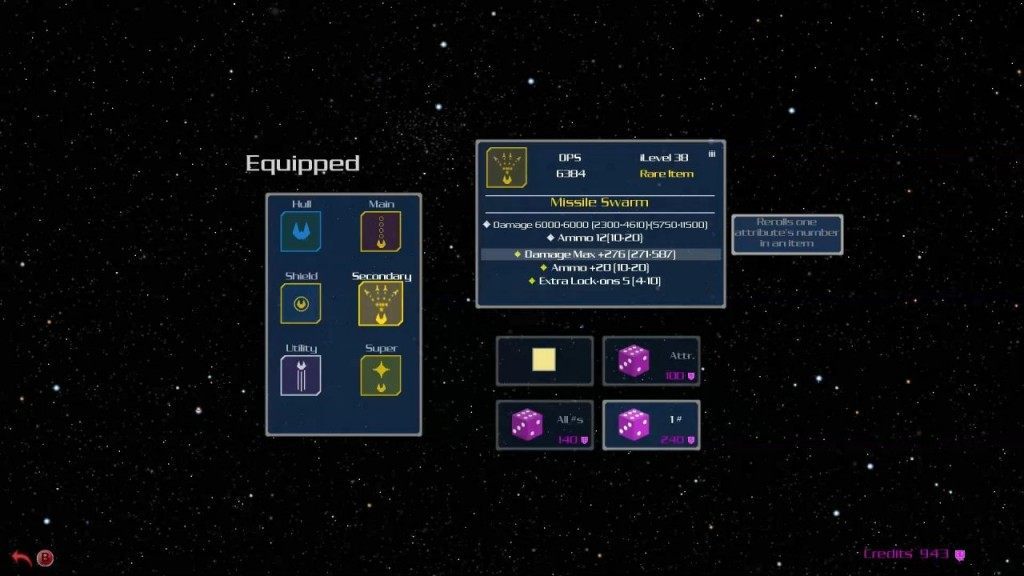 The gameplay is fast paced, with short bursts of hectic action thankfully broken up by shopping. Between rounds you’ll trade, upgrade, and choose skills purchased with credits and skill points to improve your ship. It’s not crucial that you have an min-max combination of weapons, hull, shield, and utilities, so feel free to choose what works for your play style — though as usual I found some set ups work better than others. The auto aiming missiles REALLY help when things get hairy and you’re on the run until you can charge up your main weapon, for example. You’ll need to improve and customize your ship, because the game’s difficulty curve is noticeable if you don’t find a build that works for you. Make sure to upgrade things when you can afford them.

There are fair number of enemies — though many of them are simple geometry, to be fair. They do each act a bit different, though, and the patterns are varied enough that each round felt pretty fresh. A few more complicated baddies like the battleship join the fray, along with gravity wells, asteroids, and a few other bits of randomness — though the game doesn’t throw a game breaking amount of randomness at you. The selection of loot is decent, and the reroll system to improve weapons and assign new characteristics is pretty well implemented — though I always felt a bit poor in the skills department. If you count the random properties/stats of weapons, the weapon variety ends up being plenty for the job.

It rarely gets to (what I’d consider) a “bullet hell” shooter, but it can get pretty intense, especially when you’ve got a few dozen enemies chasing you around the arena as still more are spawning. The engine strikes a pretty decent balance between randomness and not throwing the whole thing into chaos — though every now and again it will generate a level that makes you want to throw a controller. Full disclosure: I’m not great at twin stick shooters, so my frustration is likely to be greater than yours — I am old, and I have stubby thumbs. 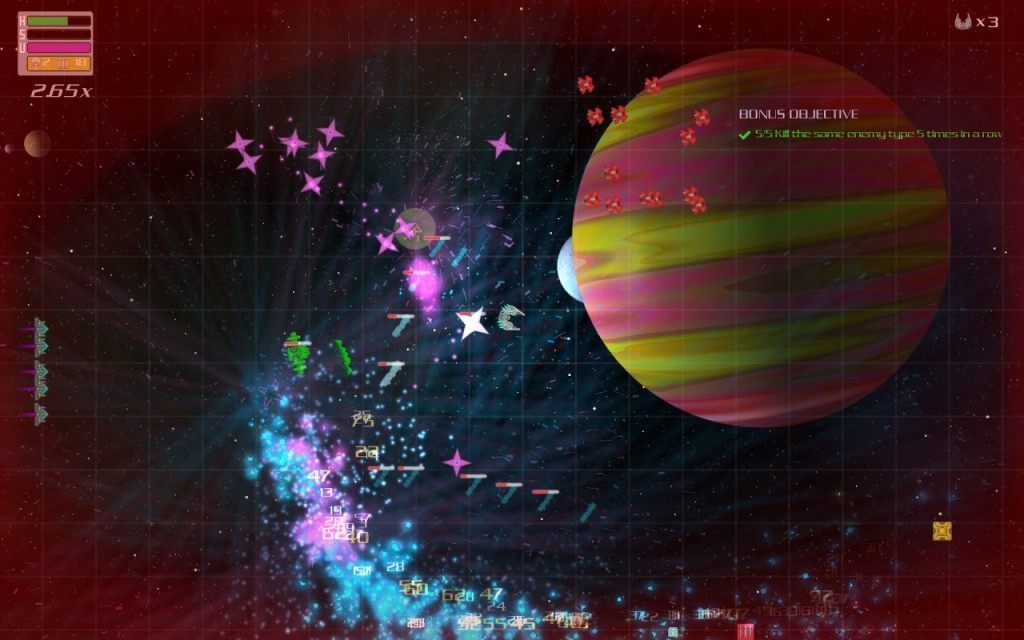 The graphics are, to be fair, uneven in places, but the colors pop and remind you (yet again) of those Geometry Wars high score couch sessions. The ships and a few larger enemy vessels sort of stand out amid the pretty neon and geometry as looking like Flash game art assets and dated — but it’s not too terrible, and it’s just a few pieces of art that aren’t up to the rest of the package. It doesn’t hurt anything.

The music is fun and fitting — it keeps a nice pace with the speed of the game and never outstays its welcome. The sound effects are vintage arcade-style boops and beeps, but the pleasant kind that remind you of a childhood playing games at your local Family Fun Center before signing your high score “ASS,” “ACE,” or “BAD”. If someone put this into an arcade cabinet, I’d put a quarter in and feel right at home.

If Gran Vitreous was more expensive, I’d probably suggest you buy it on sale, but honestly it only cost me five dollars. So due to its low price, tight controls, and solid levels of fun, Gran Vitreous is a buy — assuming you’re into twin-stick arena shooters. It doesn’t reinvent the wheel, but it provides a satisfying amount of space shooting action for the price of a hamburger, and that’s a tough deal not to recommend.

Grab a copy if you’re in the market, you’ll have a good time.