With Star Wars, liberal Hollywood got it all wrong. They get everything wrong, of course, but this movie franchise really takes the biscuit. They turned the heroes into villains, and the villains into shining beacons of virtue. With a new film on the horizon, I feel duty-bound to warn you about the desperate shortcomings of this particular entertainment phenomenon.

If we’re honest with ourselves, the real wretched hive of scum and villainy is Skywalker Ranch, where George Lucas and his band of morally dissolute bastards created the Star Wars universe, a blight on western civilisation and culture.

Star Wars combines elements from pulp adventure stories, horse operas, adds a dash of Eastern culture, and tosses it all into outer space. Amazingly, Lucas took the worst elements of all those amazing sources. If Lucas were a cook and presented Star Wars to Gordon Ramsay, he would have earned a comment like this: “OH COME ON, IT’S RAW! WHERE’S THE SAUCE???? COME HERE, ALL OF YOU. TASTE THIS!” And then he would have been thrown out of the kitchen.

There’s so much wrong with Star Wars that it deserves a book-length treatise to cover properly. After all, the famous Red Letter Media takedown of The Phantom Menace is longer than the film itself. For that reason I will focus on three of the worst mischaracterisations: the Rebel Alliance as good guys, the tragically misunderstood Jabba the Hutt, and Palpatine’s supposedly evil Empire.

This is going to upset some diehard fans, but who do you trust more? Milo, who always tells you the truth while being witty, charming, handsome and having great hair, or the filmmakers who tried to tell you that Jar Jar Binks is a hero?

THE REBEL ALLIANCE
The Alliance is a ragtag band of fighters from many different cultures bonded together by a hatred of the Empire, fighting an asymmetric war resulting in massive collateral damage and loss of civilian life. They take their lead from mystics hiding in caves and swamps, and want to return the galaxy to a primitive religion that hasn’t changed for 600 years. That’s right nerds: the Rebel Alliance is ISIS.

The Jedi are a typical wishy-washy Mother Gaia-style progressive cult. Their most obvious failing is not using the real Force powers. Force lightning is actually quite humane; it’s like hitting a bad guy with a taser instead of cutting him in half with a lightsabre.

Same thing with force choke: do we really need to shoot a criminal resisting the will of the Emperor? Why not subdue him with a choke–or the term we use in the Sith community, enhanced persuasion techniques? Besides, in the far-flung universe of Star Wars, SJWs have ensured force-sensitive individuals get affirmative consent every 10 seconds while using their powers so there’s really no big deal. 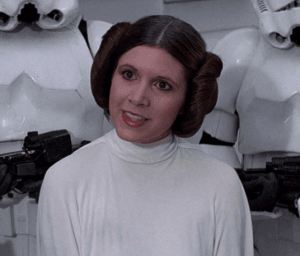 You can’t possibly justify zapping someone with lightning as evil at the same time you say controlling their mind is perfectly fine. It should have raised suspicions when Jian Ghomeshi and Bill Cosby dressed up like Jedi masters every year for Halloween following the film’s release. Rape culture is nothing in comparison to toxic hetero-Force culture.

Another crazy thing? The Jedis say control of the Force comes from “midichlorians” in the blood. Hmm. So now it’s a case of bloodline purity. Jesus, these death-eaters should just put on their SS uniforms and be done with it.

As a reminder, the “good guys” behind the Rebel Alliance abduct children from their families and raise them in a cult indoctrination centre to turn them into fanatical soldier priests called Jedi Knights–or, in the words of the mainstream media, “innocent Syrian refugees.”

So the Jedi and their puppet Rebel Alliance of useful idiots beat the Empire. Their primary victories over the Empire are destroying two Imperial defence space stations. You probably know them as “Death Stars,” but that’s just a terrorist’s propaganda term. Congratulations on supporting the killing of hundreds of thousands of freedom and peace-loving military personnel and civilian engineering contractors.

The men and women on those defensive stations only wanted to improve the galaxy, and they were rewarded by being vaporised. Isn’t it funny that Jedi masters didn’t sense “thousands of voices crying out in terror that were suddenly silenced” when their terrorist army was blowing up government installations?

It’s obvious that what really happened is Darth Vader was having a giggle and let the Death Stars be destroyed in an insurance scam. His son made a one-in-a-million shot to blow up the first Star? Him, of all people? And who do you think leaked to the rebels the one place they could attack to blow up the thing?

It’s fishy, and you should be thinking of things like this. Oh, and by the way, Darth Vader’s daughter was installed as the leader of the galaxy after he killed the rightful and democratically elected leader, Emperor Palpatine. I’m just saying.

Finally, we have the curious case of C-3PO and R2-D2, who were raised with every benefit of modern western droid culture. But they betrayed their upbringing, were radicalised and joined the terrorists. Please note that C-3PO is the only guy running around with a British accent and is gold-coloured, which is the ginger of the robot world. OK, on second thoughts it’s no surprise he joined space ISIS.

JABBA
Jabba the Hutt is treated as this huge villain in Return of the Jedi, but this is simply unwarranted. Jabba is a responsible employer, entrepreneur, and philanthropist. He is a capitalist hero. In the case of Han Solo, he took reasonable steps to recover a debt from a known intergalactic criminal. His agent Greedo was acting within the law when he was shot down by the notorious outlaw Solo. Lucas had to edit in special effects to cover this accidental glimpse of the truth, by showing Greedo shooting first. 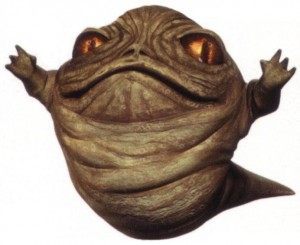 Jabba the Hutt was actually pretty progressive. He ran a melting-pot society with criminals of every race, colour, and creed working together in harmony. He even employed the differently abled, like the Rancor monster. He personally financed entertainment for the downtrodden masses of Tatooine; imagine the trouble they’d get into without pod races to watch. In fact, I believe America’s rash of midnight basketball programs were based directly on Jabba’s pioneering work in the field.

Jabba disposed of his waste in an extremely eco-friendly manner, feeding enemies to the Sarlaac beast he kept as a pet. Human bodies digested over 1,000 years are way better for the environment than straight burials. The fact is Jabba would fit right in at Burning Man. He’d have his sand barge — destroyed by the terrorists, of course — and would hang out with Elon Musk and maybe sign a few multimillion dollar deals.

Jabba the Hutt, or as I call him Jabba the Hero, was brutally murdered by a white woman. Why don’t I see a single #GreenLivesMatter protest? Jabba’s main crime as far as I can tell was being an invertebrate of size. Leia brutally slugshamed him. No doubt if he had survived his throttling he would have had PTSD and would have started a Tumblr, except being an entrepreneur he’s not a whining loser so maybe not.

Speaking of Leia, a straight white princess murdering a minority businessman with no repercussions is the ultimate example of white privilege.

THE EMPIRE
The Empire gets a bad rap across all of the Star Wars movies. The fact is Palpatine was the legitimate ruler of the galaxy. The galactic senate he replaced was a sham: they gave Gungans an equal say on important matters. It was basically a space version of the UN that should never have existed in the first place. 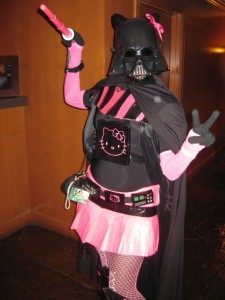 A little-known fact is that all the stormtroopers killed by the “good guys” are people of colour. The easiest way to tell is they can’t hit the broad side of a barn with their blasters. They also hate the ice world Hoth.

Speaking of PoC, Lando Calrissian is a hero that followed the simple rule of “See something, say something” when he handed over terrorists to Vader. The movie is racist in portraying him as switching sides to the terrorists; Lucas probably feared a proud independent black character in the films.

There is also the fact that he won Cloud City fair and square in a card game and wasn’t brought in as a minority hire as part of an affirmative action programme — it upset liberals so much they demanded his character be hobbled.

The most “evil” act by the Empire in the film is the destruction of Alderaan by the Death Star. I am here today to tell you that Bail Organa did Alderaan. I’m sure if you loaded up the Star Wars galactic version of YouTube, along with many videos of Figrin D’an and the Modal Nodes you’d find a version of Loose Change detailing the plot to blame the Empire. Trust me on this one.

The fact is, one space station couldn’t destroy an entire planet. Forget the official history, which I am reliably informed got 1/100th the budget of the Princess Leia Organa library and brother-kissing cultural centre… no matter what they say, super-lasers can’t melt planetary crusts.

To wrap this up, we’re going to push the dork level to warp factor 9 (yes, that’s Star Trek, that’s the joke, but if I don’t add this caveat half you twats will write in accusing me of being an idiot). The Emperor is the ultimate good guy of the Star Wars universe, but for reasons you never see on film.

As detailed in this excellent reddit post, Palpatine knew the galaxy was facing a horrifying threat from radical Islam — sorry, the Borg — sorry, feminists — ugh, I mean the Yuuzhan Vong. All of his military build-up was to defend the galaxy from this terrifying invasion, and instead the terrorists caused a war to take a different path, one that cost half of the galaxy their lives.

A previous version of this article referred to the “far-flung future” of Star Wars. We of course meant far-flung past, since the series is set a long time ago in a place really far away, or some idiotic shit like that. The wording has been adjusted, to satisfy Star Wars fans and persnickety internet pedants. (But we repeat ourselves.)