Tom Ciccotta, a student at Bucknell University, has been removed from his position as Junior Class President after taking up a part-time job at Breitbart Tech and inviting conservative speakers to campus.

With no practical reason to remove Ciccotta (his term was due to expire in just one week with the end of the semester), it seems that the Bucknell student has become the latest victim of anti-conservative sentiment on campus, targeted for little more than being an effective conservative organizer.

Ciccotta was, by the numbers, a dedicated and hard-working member of Bucknell’s student government. He put in over 100 hours over the course of this semester alone and attended over 75 meetings since January. He also organized two major social events for Bucknell’s junior students, despite only being obliged to organize one.

Ciccotta managed these commitments despite taking five classes at Bucknell instead of the usual four, managing the campus radio station, and acting as president of the College Republicans — all in addition to his writing commitments at Breitbart. Yet his superiors have now removed him from his position just one week before his term as president was due to expire.

Their reason? Ciccotta had missed 4 (out of 79!) meetings this semester. One of those was due to a scheduled job interview with Alex Marlow, the Editor-in-Chief of Breitbart News.

Bucknell’s Student Government Constitution states that when meetings are missed, “special circumstances” must be taken into account.

Other members of the student government have missed meetings because they overslept, only informing their superiors after the fact — via text message. They, unlike Ciccotta, have not been removed from their positions. Which of course raises the question: is having slept in more of a “special circumstance” than organizing well-attended events on campus and developing one’s career?

Furthermore, why was Ciccotta suspended just a week before his term was due to expire, when he had no more work left to do?

To answer these questions, Breitbart reached out to the two individuals who made the decision, Student Body President Mark Merino and Student Body Vice-President Nigel Ravida.

Merino, responding to our email, informed us that Ciccotta’s removal had nothing to do with his invitation of conservatives or his job at Breitbart. “This is strictly an issue regarding attendance,” he said. He also assured us that other students who missed meetings have been “met with and addressed very directly.”

Merino’s emailed response contained a signature listing his preferred “gender pronouns” as “he/his/him,” a popular device used by members of the radical identitarian left who believe that one’s gender can be chosen or changed.

Responding, Tom Ciccotta told Breitbart Tech that in all but one of his absences, he notified his superiors well ahead of time. On occasions where he missed meetings due to work commitments at Breitbart, Ciccotta said that Merino and Ravida “seemed supportive.”

It appears that supportiveness has now changed — or, perhaps, was never quite genuine to begin with.

Merino also claims that Ciccotta was “asked to resign.” Yet Ciccotta maintains that his removal was not a matter of choice on his part: he was removed from Bucknell’s student government website before he was informed of the decision. In other words, he didn’t resign — he was thrown out out.

In a follow-up email, we asked Merino why Ciccotta was suspended so close to the end of his term as junior president. We also asked whether any other member of Bucknell’s student government had ever been removed for missing 4 meetings out of 79. Merino has yet to respond.

According to one member of Bucknell’s student government who attended the meeting in which Ciccotta was removed, the decision was made without a vote of the student Executive Committee. 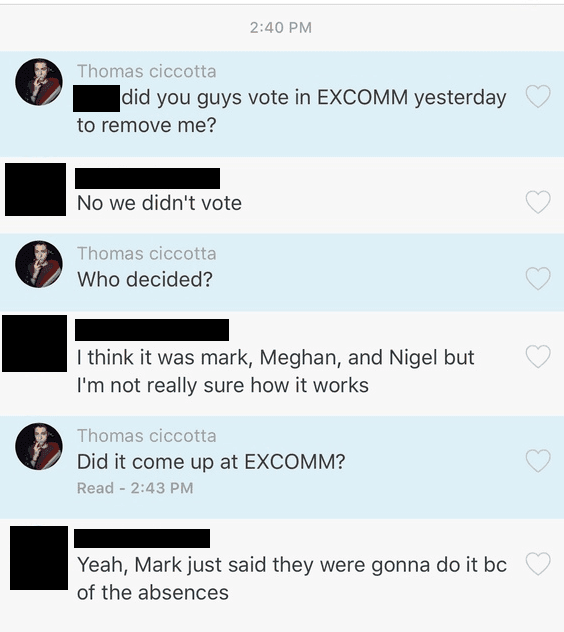 According to Ciccotta, he was initially told by Merino that there was no way to reverse the decision, despite the fact that the Student Government Constitution clearly outlines an appeals process. Following Breitbart’s request for comment, it appears that Merino’s position has changed: he recently emailed Ciccotta to inform him that he may, if he wishes, appeal the decision at the next meeting of the Executive Committee.

If a vote does take place, the president and vice-president are likely to face pressure from a growing number of Bucknell students who are upset with their decision to remove Ciccotta.

Despite his wide range of extracurricular commitments, Ciccotta is widely perceived as an efficient and hard-working member of Bucknell’s student community.

Ethan Wise, a member of Bucknell’s class of 2017, said, “It’s great to have students who have the will and follow through to invite big names to campus like D’Souza, Milo, and Crowder. Tom has been instrumental in bringing all three to campus this year.”

Brady Wozosky, another member of Bucknell’s student government, said the decision to suspend Ciccotta just a week before the end of term was “really unfair.” Bucknell’s Junior Class Vice-President also waded in to the row, accusing Mark Merino of “just doing this to hurt Tom.”

Ciccotta first encountered trouble at Bucknell when, as president of the College Republicans, he invited Milo Yiannopoulos to speak on campus.

The visit from Yiannopoulos, whose tour of US campuses has caused easily-offended leftwing students to organize therapy sessions in his wake, led to panic from Bucknell administrators and faculty, who organized a range of bizarre restrictions on the event.

The college Republicans were prohibited from filming the talk, and students were not allowed to ask Milo any questions verbally — they had to be scribbled on the back of index cards. Yiannopoulos was also prohibited from speaking to students one-on-one after the event and was escorted out of the building by campus officials as soon as his talk concluded.

After organizing the event, Ciccotta faced a backlash from Bucknell’s faculty. After suggesting, in a private meeting, that the event with Milo had been Bucknell’s “best ever,” he was told by the college’s Student Media Advisor that his attitude would “isolate” the people who worked under him at the college’s radio station.

He was later threatened with having his position as host of a political talk show on campus taken away over an alleged “conflict of interest.”

It was claimed, by the same Student Media Advisor, that Ciccotta’s role as the host of campus talk show Lunch Hour came into conflict with his role as Station Manager of the campus radio station. He was accused of bringing a political slant to the radio station. Ultimately, the threat wasn’t acted upon, and Ciccotta remains the host of Lunch Hour and Station Manager.

For those who have followed our reporting on free speech and the American campus, it should be apparent that being openly conservative on campus is becoming an increasingly difficult pursuit. Trump supporters on campus now face calls for their arrest, and those who invite conservative speakers to campus are accused of damaging their fellow students’ mental health and emotional well-being. Far from being congratulated for adding to the intellectual and political vibrancy of their universities, conservatives on campuses are treated as pariahs.

Nonetheless, judging by the early reaction from Bucknell students who have been informed of the decision to remove Ciccotta, it seems that some students have had enough of this politically intolerant status quo.