Deus Ex: Mankind Divided, the latest entry from the team at Eidos Montreal, lives up to the Deus Ex legacy, which is in and of itself high praise. It’s a capable and compelling role-playing game that refines the gameplay of Human Revolution and confronts harsh issues without treating its players like children.

Deus Ex: Mankind Divided asks us to step back into the shoes of Human Revolution protagonist Adam Jensen, roughly two years after the climactic events of the previous game. Jensen is embittered and weary of the madness that infects a future all too similar to our own.

The directed evolution of humanity through biomechanical augmentation has disrupted everything from the military to the mundane, and those quickest to adopt this technology are now the first sacrificed to placate growing unrest among the populace. The advantage of augmentation has become its ultimate liability.

These “clanks” — or “augs” or “hansers” among other epithets — are distrusted for their abilities, chained to the Neuropozyne medication that manages their body’s rejection of the foreign parts, and scrutinized for their every word and action.

This is a dark, dystopian future that makes Human Revolution positively cheery by comparison. Purposefully obtuse bureaucracy, frequent security checkpoints, and blatant human rights abuses recall the early days of World War II, and at times echo the current struggles within our society. 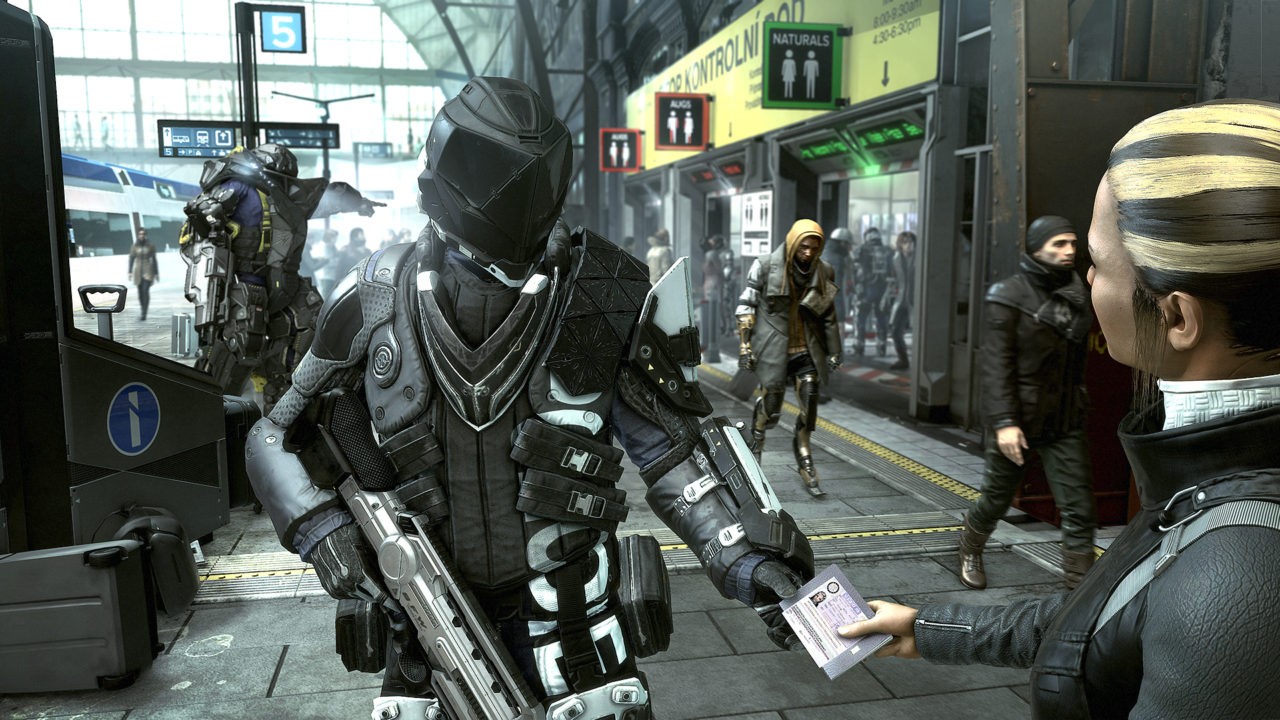 But Deus Ex: Mankind Divided never tells you what to think about any of these issues. Like the very best of art in other mediums, it poses questions for you to answer. Your decisions aren’t caked in narrative punishment. They simply exist as a vehicle for you to tell your story through the lens of Adam Jensen’s experience.

Mechanically, Deus Ex: Mankind Divided is quickly familiar to those who played Human Revolution. The essential gameplay is virtually identical, with expansion and enhancement that pays homage to the emergent design of the original. This is peak modern Deus Ex, the sophomore effort of a team that is comfortable with both the unique design philosophy of one of the most intellectually challenging properties in gaming.

Anyone who’s played a first-person shooter in the last decade or so will be familiar with the basics of combat. The expected cover and iron-sight aiming mechanics are in play, but augmentations are what adds real variety. You might be hurling refrigerators at gang members or firing lethal anti-personnel pellets out of your own bio-mechanical body to clear a room all at once.

If you’re feeling less confrontational, the game also offers strong stealth and hacking options. Sure, you can blow up that sentry robot, but you can also walk right by invisibly, or recode it to kill its masters. And if you’d like to avoid dirtying your hands entirely, that’s an option too. Even pacifism is a legitimate play style. 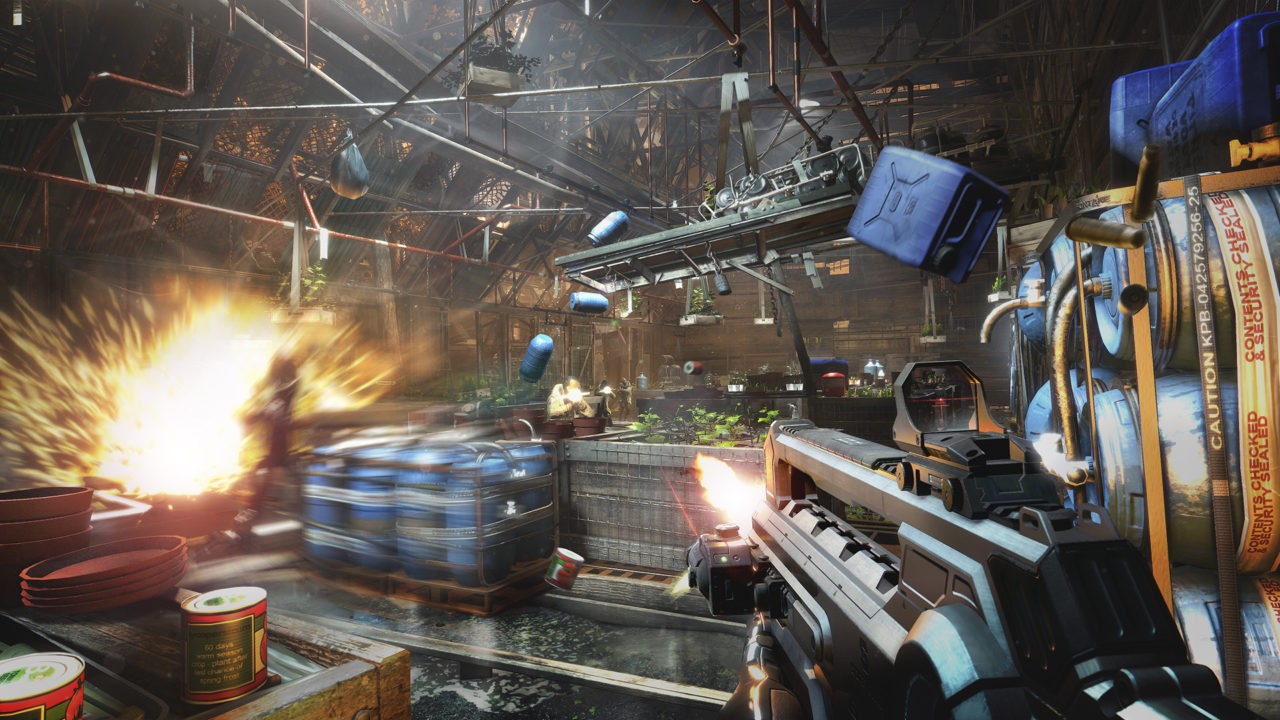 The game’s best moments are the sum of all these parts working together. You can throw a literal dumpster fire at a foe, then use that dumpster to leap onto a roof, run invisibly across it, leap down in a shockwave that flattens several others, then duck into a vent to pop out on another floor to hack a computer that redirects sentry turrets to clean up the remaining targets. I know, because I did it.

Diplomacy is a branching multiple choice affair familiar to the series, with the CASIE augment making a return to open up further possibilities. Conversation remains a cornerstone of the experience, but wisely bucks the recent trend of Mass Effect, Fallout, and others by telling you precisely what you’ll be saying when you choose a dialogue option. The actual spoken line is rendered in a subtitle below the radial conversation menu, a design improvement as elegant as it is obvious.

Even more than Human Revolution, Mankind Divided takes many of its cues from Arkane’s Dishonored. There are augmentations for slowing time, dashing around in a blur, and remote manipulation that all seem to recall the adventures of Corvo.

Deus Ex: Mankind Divided is — perhaps appropriately — an evolution and refinement of the previous title. While it lacks major innovations, it does what it sets out to do extremely well, with only a few bumps along the way. 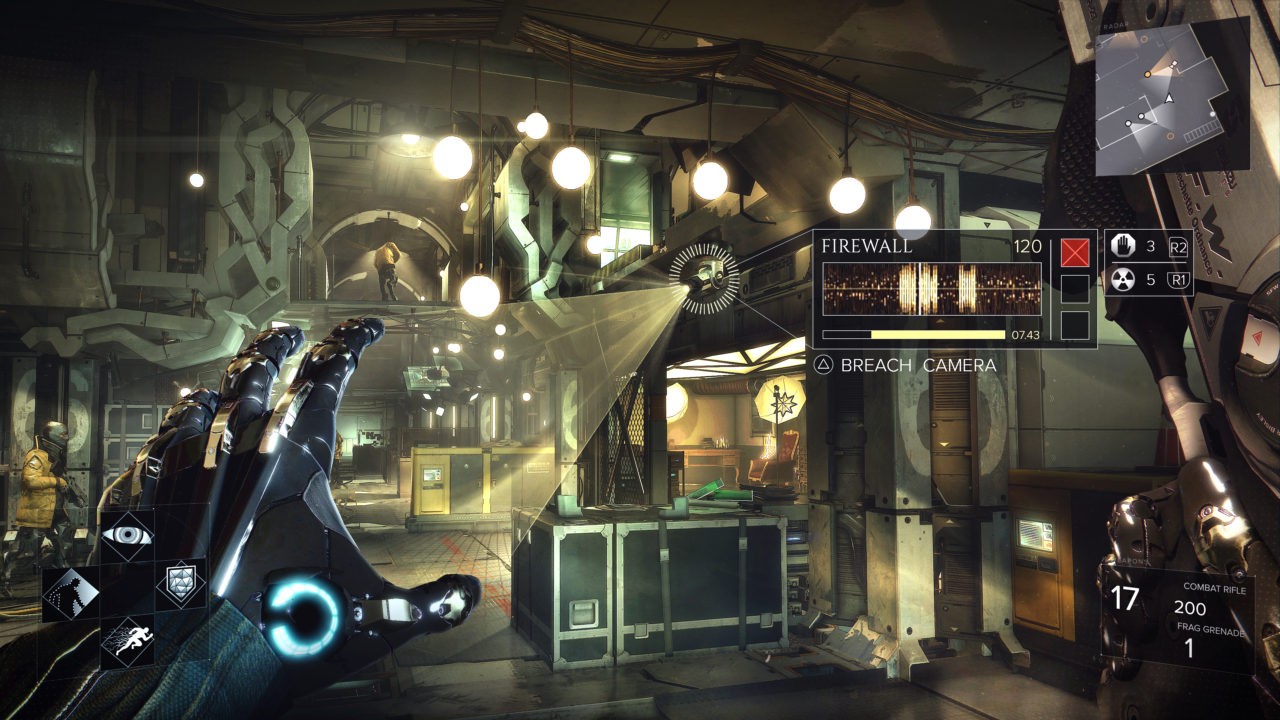 The primary criticisms I have are mostly the stuff of patch notes. Some areas require further optimization to avoid performance hitches, controls can be slightly unrefined, and there are some lingering UI bugs. While occasionally irritating, there is very little that won’t almost certainly disappear within days of the game’s release. For a title with this level of interacting systems, it’s surprisingly clean right out of the gate.

My only real complaints are aesthetic. Animation is too animatronic for a major 2016 release, with mostly lifeless faces and mouths that struggle at times to synchronize with the voice acting they’re portraying. Lighting effects are oftentimes flat, and in a world modeled primarily in steel and concrete, the lack of contrast can make otherwise interesting environments seem a bit too same-y.

These are minor quibbles against a mesmerizing experience, framed by a wealth of options that allow you to control your experience of the game to an extent that few games rarely dare to attempt. Deus Ex: Mankind Divided wants you to control the experience, and it isn’t shy about giving you the tools to do so.

Weapon and ammo customization plays along with Jensen’s own augmentations. Those augmentations have gotten even more game-breakingly dramatic, only held in check by a need to monitor the overall power consumption of our protagonist’s newly discovered strengths. 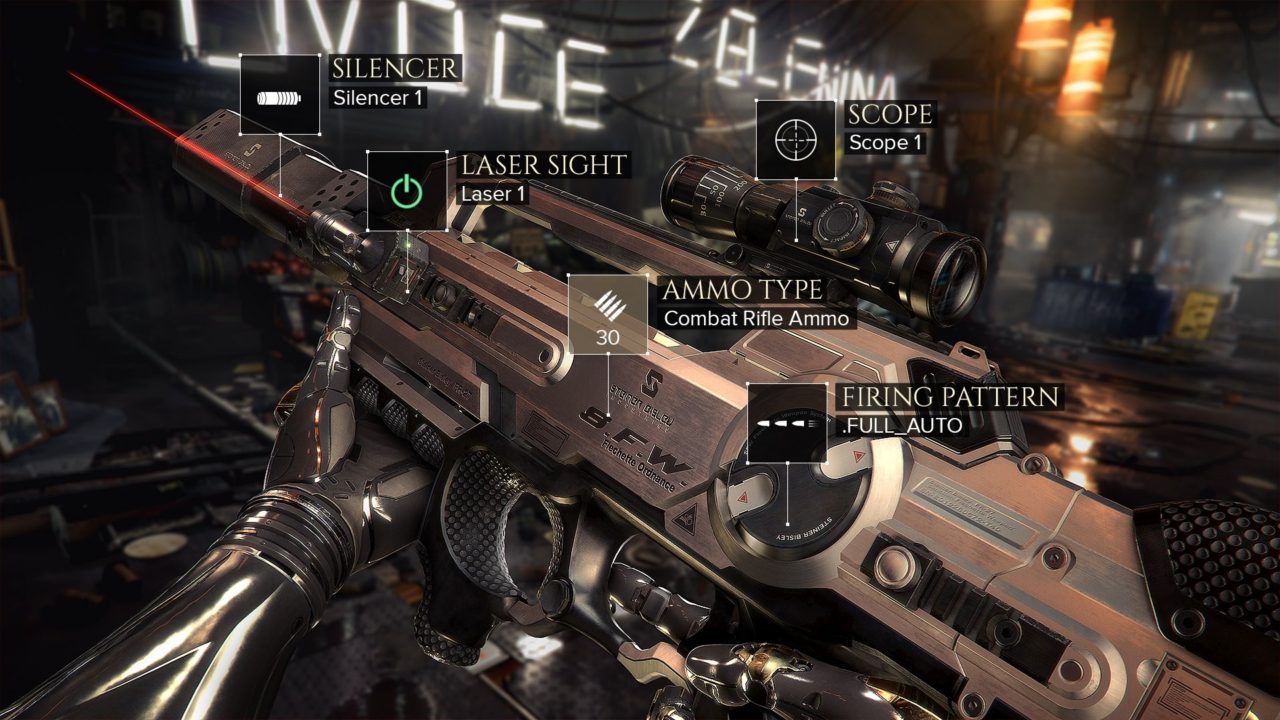 “Praxis” kits are once again the currency by which you will upgrade Adam’s abilities, but nonspecific “parts” have been added so that you can do the same with your loadout. Crafting makes a more meaningful debut in the game, but never so complicated that it disrupts the thoughtful pace of the game itself.

You’ll once again make your way from hub to hub, helping innumerable NPCs with all sorts of problems in ways that best match the style in which you are building your character. You can make yourself into a virtual Terminator-esque cybernetic wrecking ball, but there are a multitude of other ways to approach any given situation.

You can be a real asshole, too. 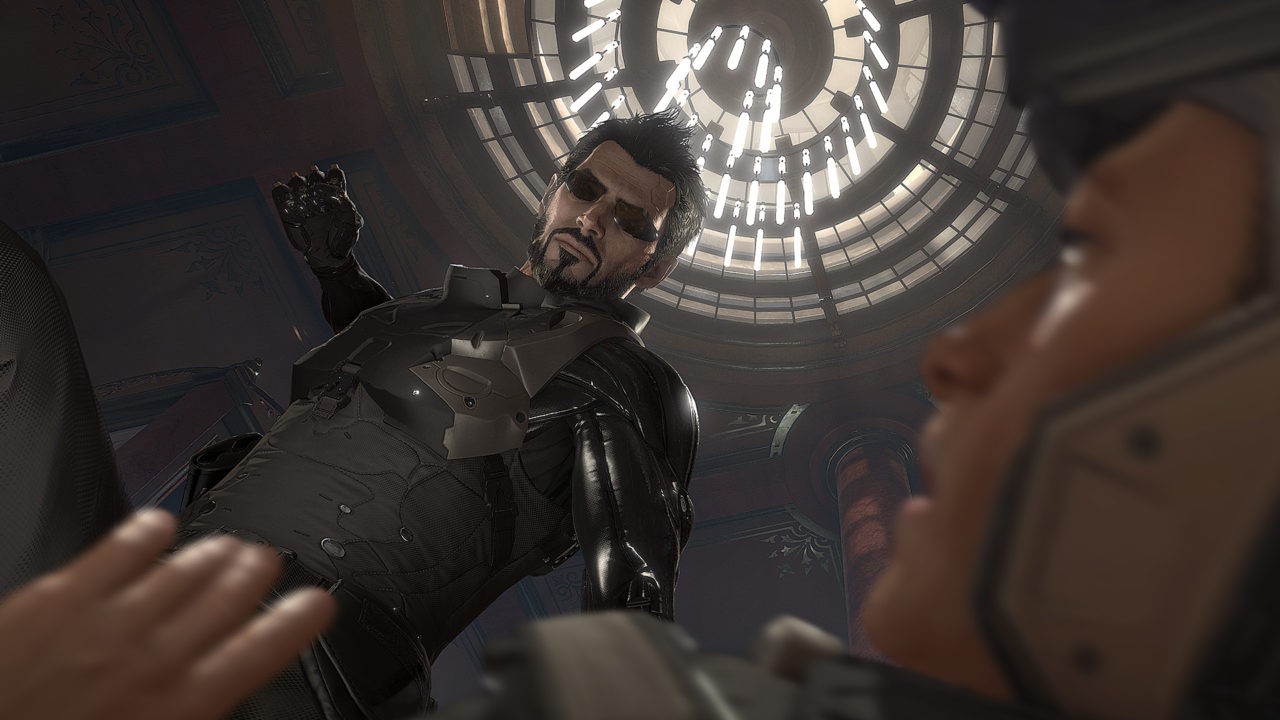 Unlike some of the clumsier puppy-kicking morality systems of many titles driven by player choice, Deus Ex: Mankind Divided allows you to play all shades of good or bad guy on your way through Adam Jensen’s story. While the core arc remains the same, everything you do between the prologue and epic culmination is yours to decide.

As mentioned before, the game doesn’t feel the need to brutalize you for making the “wrong” decision. And much like The Witcher 3, sometimes the “right” one isn’t the pragmatic or idealistic best. The game doesn’t tell you how to feel about what’s going on. It gives you the information and then a free hand in reacting to it.

Deus Ex: Mankind Divided treats you as an adult. It presents you with intellectual and moral difficulty, desperate environments, and situations with which you might not always be comfortable. Early on, you’ll find yourself at ground zero of a terrorist attack that very obviously mimics recent tragedy. You’ll hear a child screaming over his mother’s body in the wreckage. You’ll witness copious examples of prejudice, exploitation, and atrocity throughout the game. 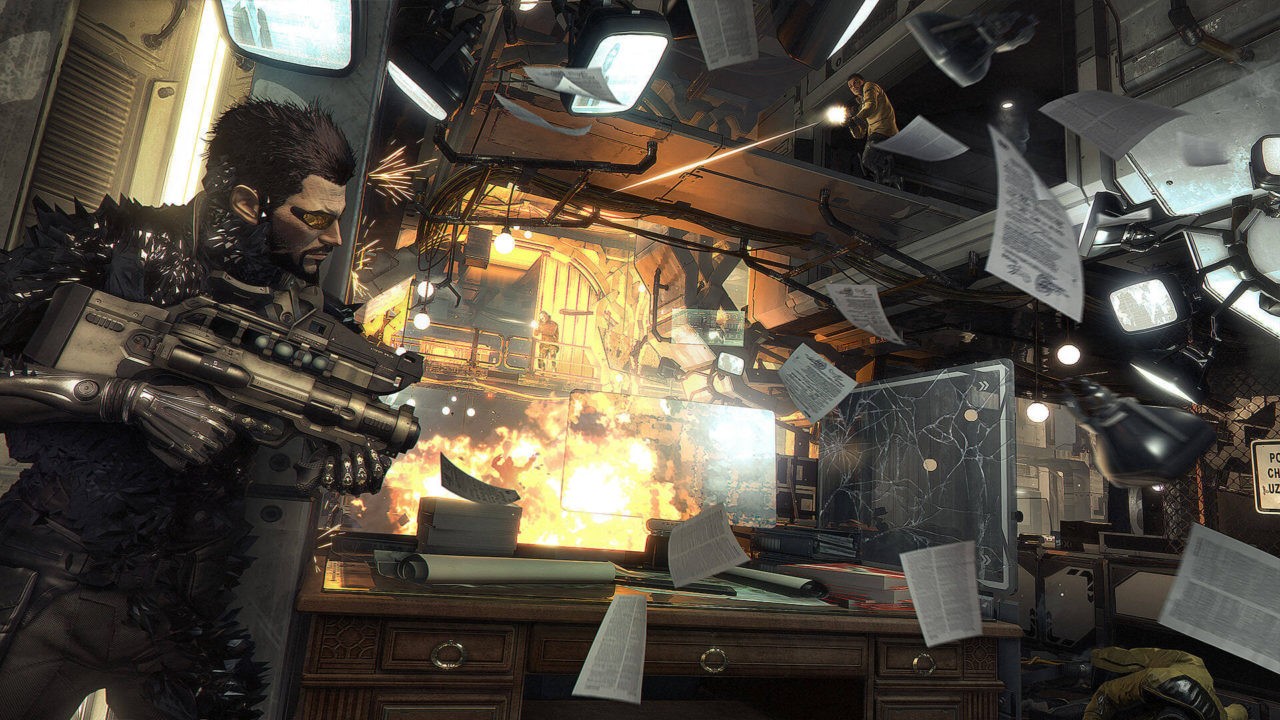 No doubt many people will have a hard time reconciling those things within the context of a video game. What we’ve seen depicted for decades in every other form of media is still relatively new ground for electronic entertainment. The original Deus Ex was one of the first games to take on societal and ethical subjects head on, blunting their edge by positioning them in the context of a far-flung dystopia.

As real life begins to converge with a future that was once mere science fiction, these ideas have gained resonance. Rather than cringing away from that, Deus Ex: Mankind Divided embraces these conversations. Yes, you can make bad decisions. Yes, there will be consequences for many of them. But in the spirit of Deus Ex, these decisions will be yours, and so they’ll matter.

There’s a good chance you’ll be exposed to familiar ideas and forced to reconsider them from a different perspective. But you won’t be force-fed the answers, and that makes all the difference. 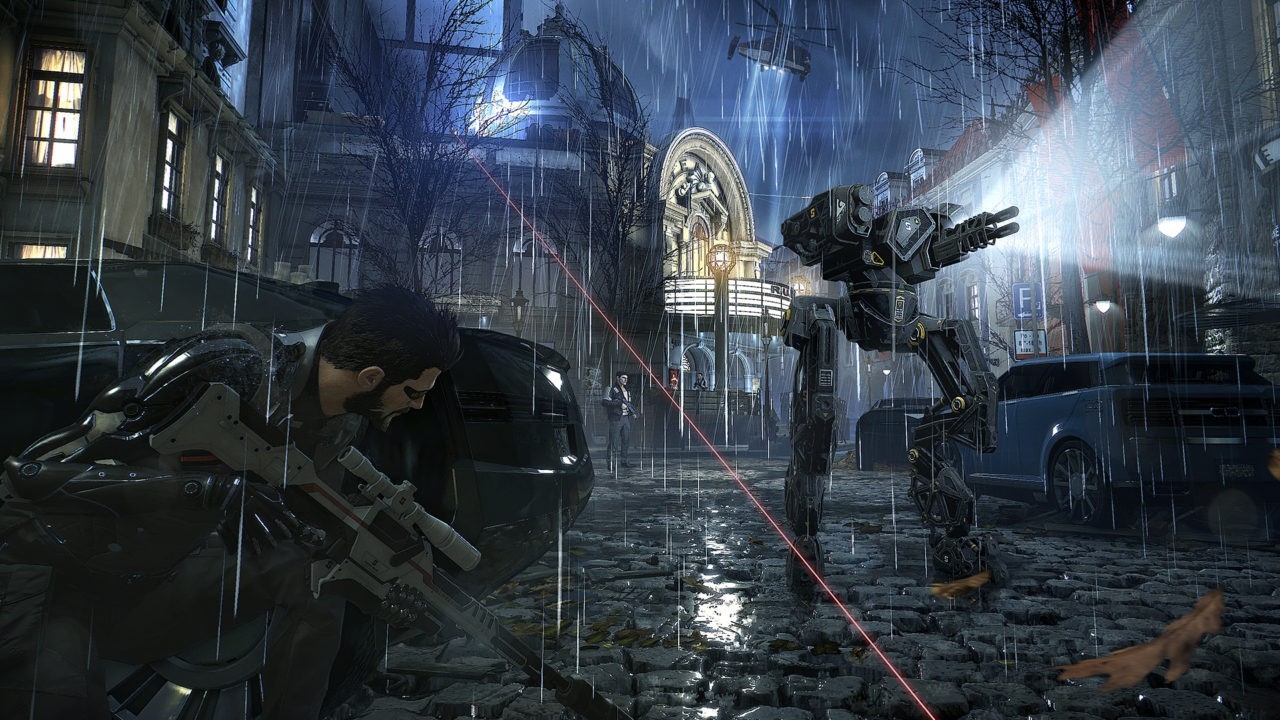 Technical imperfections aside, Deus Ex: Mankind Divided is an absolutely brilliant game. Flexible gameplay, interesting systems of progression, a compelling narrative, and the iconic player agency that has made this franchise legend all combine to produce an unforgettable experience.

Perhaps the highest praise I can offer is that it lives up to the pedigree of its forebears. Below the cyberpunk aesthetic, it’s a mature conversation about serious issues. If you can handle that — or perhaps even if not — consider this my strongest possible recommendation.

Editor’s note: A copy of Deus Ex: Mankind Divided was provided by Eidos for this review.