Watch Dogs 2 is the Internet as designed by committee. Its hackers are caricatures built from selfies and buzzwords, trying to poke fun at subversive Internet culture without understanding it. It’s a sanitized and commercialized version of real and relevant issues, and it hamstrings its own potential in a Quixotic quest to be hip.

The sequel to 2014’s Watch Dogs is another open world hacker’s playground. Chicago has been traded for San Francisco, and vigilante Aiden Pierce has been replaced by Marcus, AKA “Retr0.” Just as in Grand Theft Auto and Saints Row, the game revolves around picking up missions throughout an expansive open world, then choosing your method of objective completion.

Ubisoft’s Watch Dogs franchise expands your options over those games, offering tools with which to sabotage the mechanics of the world itself. Every pedestrian, every car, every electronic device is a potential weapon or distraction with Retr0’s magical smartphone an . It’s an extremely effective twist on a burgeoning genre of games that thrive on making the world around you feel alive. It’s in maintaining that illusion that the game falters once more.

New protagonist Marcus seems like a solid character concept, but Watch Dogs 2 is too pre-occupied to invest the time to bring him to life. He’s a repository of smirking one-liners and vague assertions about liberty, but there’s no meat on those bones. I would have loved to spend even a little bit of time before his initiation into hacktivist group Deadsec, getting to know him and his motivations. The cardinal rule of “show, don’t tell” is broken right out of the gate, with faceless voices giving monologues about his genius and potential without any reason to care.

Some sort of introductory flashback cinematic might have offered a crucial bit of personal investment. As it stands, the game just seems to hope you’ll care just enough to keep going. If you’re looking for a compelling narrative, you won’t find it. Watch Dogs 2 lives and dies on its gameplay, for better or worse. 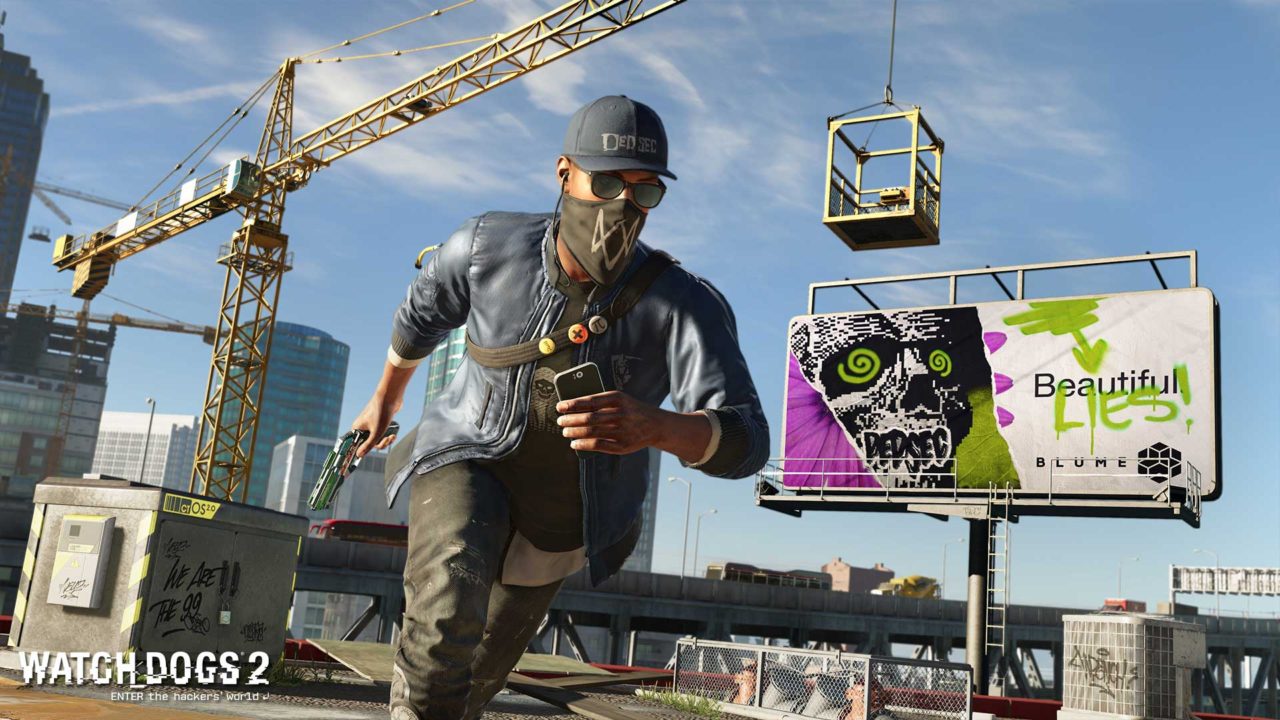 Watch Dogs 2 looks pretty enough, once I dismissed some of the muddier textures with the optional “High Definition Texture Pack.” It’s reasonably well optimized, too. Effects like motion blur look just as terrible as they do in most games, but toggling them off results in a marked increase in both image quality and performance.

Managing to make Marcus look halfway decent, however, was a challenge. Despite a multitude of clothing options, there is a distinct “hipster” vibe that carries through every store, regardless of branding. You can be a preppy hipster, or a metal hipster, or even a sk8er hipster. It’s just about impossible to find something that Marcus doesn’t look like he’s wearing ironically.

He fits right in with the San Francisco chapter of the Deadsec hackivists, who all look as if they were designed by a group of elderly people who hadn’t actually met any millennials but have read lots of insightful think-pieces about them. Whoever thought it would be clever to dress one ally up in studded leather, then give him a mask that makes ASCII facial expressions in real time, should not be allowed to make decisions about visual design ever again. 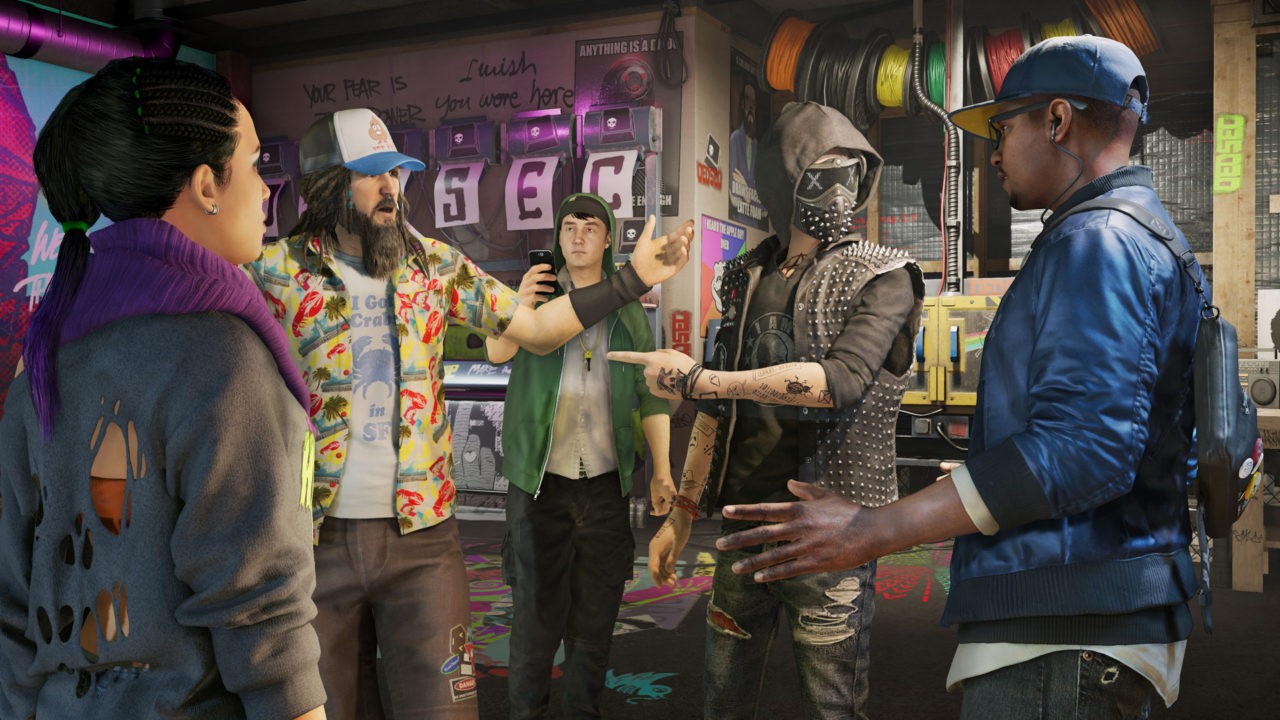 The game’s humor is wielded like a blunt object, making me cringe and the characters giggle with equal intensity. Ubisoft has always struggled to employ quality writers, and it has never been so evident as it is here. We’re one step above knock-knock jokes, but Marcus and his pals are winking so hard at the camera that I worry they’re having some sort of communal seizure. If “‘Member the internet? ‘Member memes? Ooo, I ‘member! ;) LOL [cat picture]” seems like the height of humor, maybe you’ll enjoy it.

But let’s move on to the mechanics of gameplay itself.

The gunplay in Watch Dogs 2 isn’t bad by any stretch of the imagination, but neither is it memorable. It’s a shame that it is almost always the most expedient way to complete an objective. Still, if Ubisoft knows anything, it’s shooting stuff. While the combat lacks any sort of real punch, it is more than competent.

A plethora of weapon skins manage to add a weird sort of playfulness to your murder sprees. Again, while there isn’t anything wrong with the feature, it really feels as if the game isn’t ever sure where it wants to live inside your mind. The hackers end up feeling like a band of merry psychopaths, which adds a certain — and seemingly unintentional — darkness to every cyber-Robin Hood escapade. 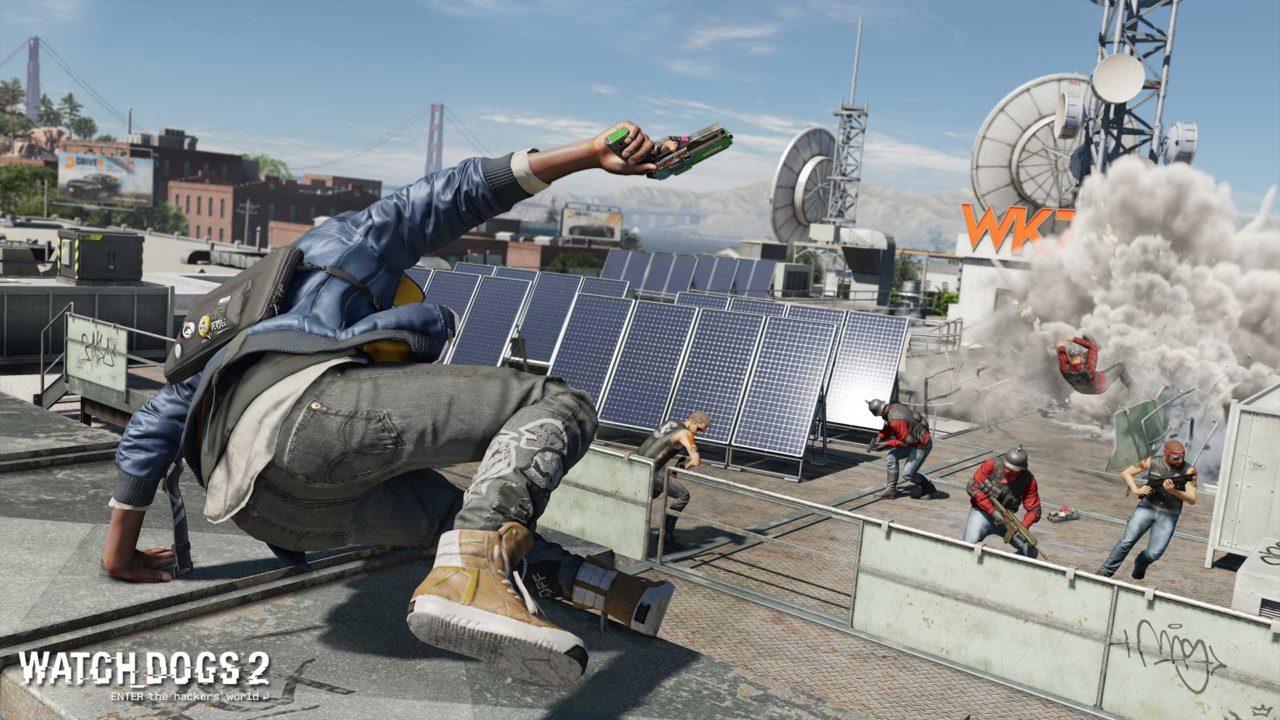 Vehicle control is the most openly egregious element of design. Just about every vehicle controls like a go-kart. There is no heft in the physics, no sense of weight or inertia. It is by far the worst experience I’ve had driving around an open world environment in recent memory, and begs for the “realism” toggle from the otherwise lackluster Mafia III.

It’s another hit against already shaky immersion. With few exceptions, I consistently felt as if I were controlling little RC cars rather than full-sized vehicles. I wasn’t looking for stolid adherence to realism, but there’s a way to do this — see Need For Speed, Burnout, GTA, and even Driver, among others — and Watch Dogs 2 just doesn’t get anywhere close.

On-foot traversal is little better. Despite all of their experience with the Assassins Creed franchise, the pacing, control, and animation of the protagonist’s parkour is incredibly awkward. Hold down the right trigger (or the space bar) and hope Marcus does something similar to what you’d like to see. That’s it. Because the traversal mechanics are so clumsy, enjoying the act of exploration is difficult.

The lethal rope-ball’s function is restricted to over-long canned animations. It’s a regrettable lack of use for a weapon that might otherwise have been an intriguing addition to Retr0’s arsenal. Melee combat is essentially nonexistent, but it’s a reasonable oversight in favor of the game’s obvious focus on remote activity. 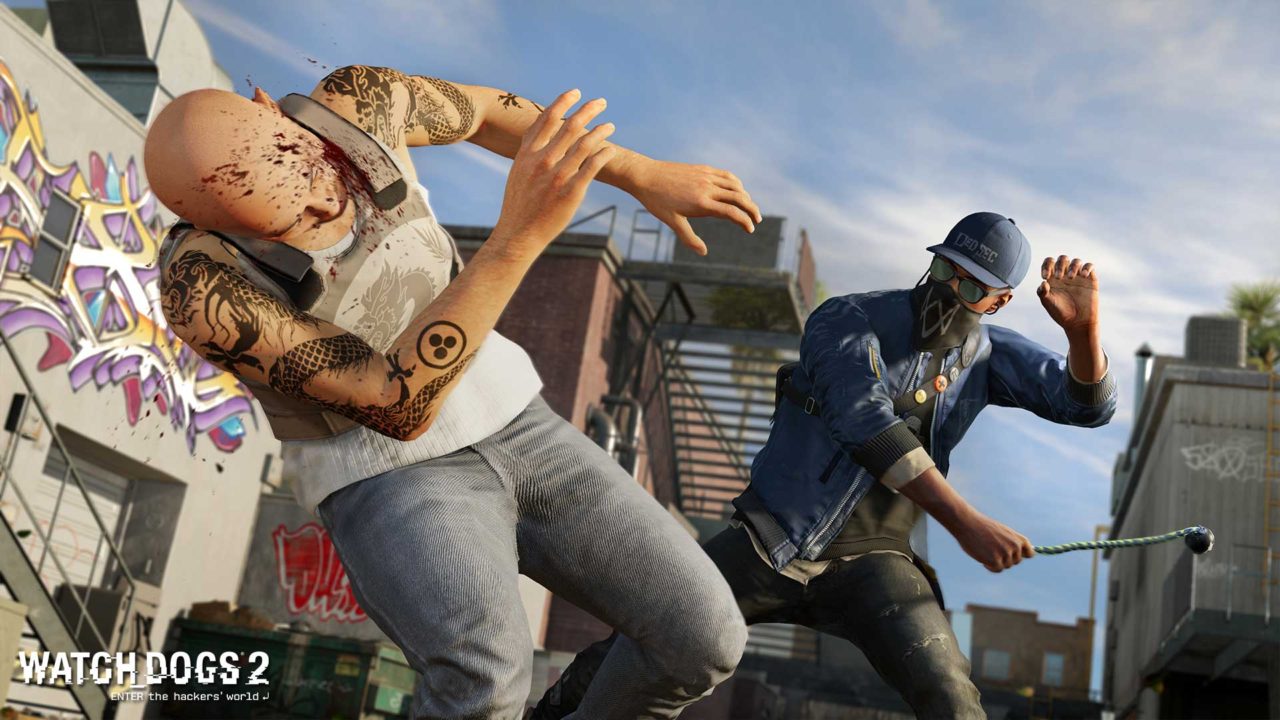 But it’s toying with technology that lies within the silicon heart of Watch Dogs 2, and that’s where it excels. Both the jumper and quadcopter drones are easy and fun to control, with various upgrades to give them even more functionality. You can also hack anyone from pedestrians to hardened criminals in a multitude of ways; stealing their money, listening in on their conversations, or causing their phone to explode.

I particularly enjoyed sending false alerts to local gangs to attack any security standing in my way, then flagging said gang members on police scanners to clean up the remaining mess. It frequently spiraled out of control, sometimes so much as to make my task even more hazardous in the end. I loved every minute of it.

Multiplayer returns in Watch Dogs 2, and is one point of marked improvement over the last game’s already enjoyable online diversions. While I could have done without the frequency of interruptions, most of the events are a lot of fun. The cooperative experience is especially enjoyable. When you double the hacking mayhem, moments that feel “cool” and/or hilarious almost always ensue.

I left the game’s world conflicted. The concept of an interactive playground of systems with loosely constructed narrative context worked wonders for games like Crackdown and Shadow of Mordor. But in a game that grounds itself in the real world, some of it comes off as so ludicrous that it’s hard to relate to, or care about, the characters involved. 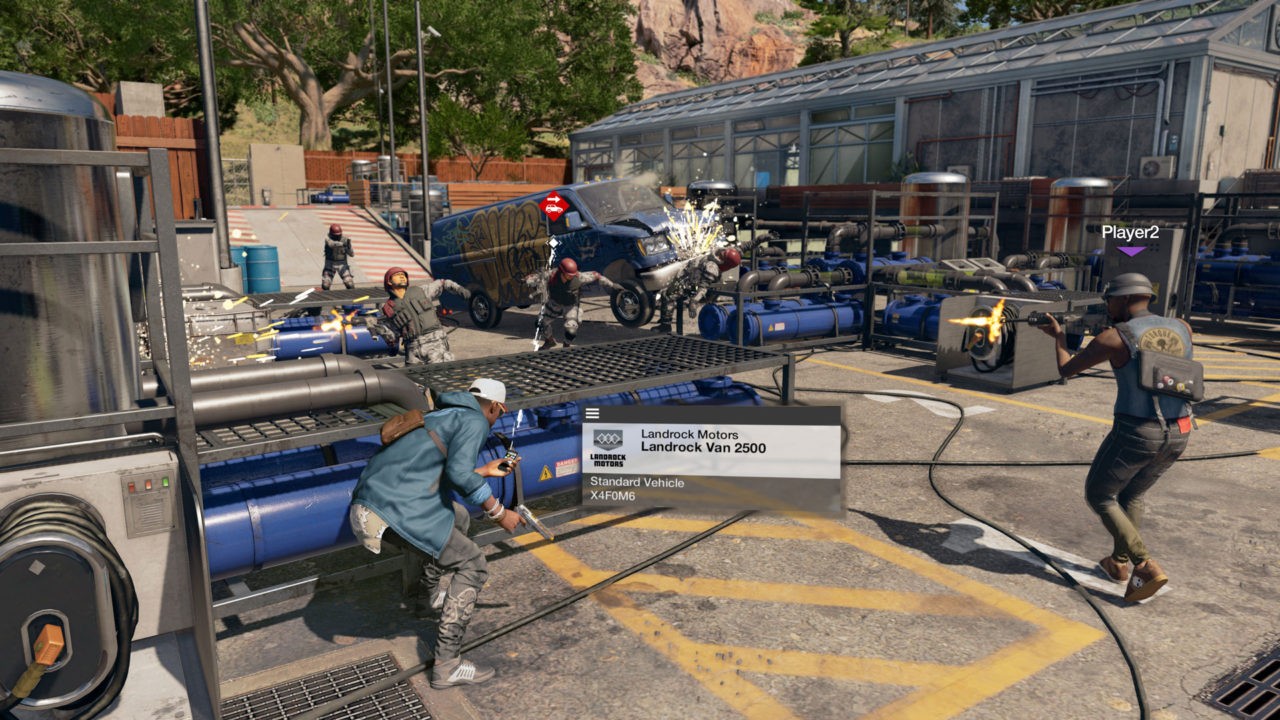 There’s a lot of criticism here, but it doesn’t mean that I was unable to find plenty of enjoyable moments within the game. There is an essential enjoyment to wreaking havoc, and the little details scattered through the environment are welcome moments of personality. Overheard dialogue, while often awkward, still throws sparks of life into air that otherwise feels notably antiseptic. Alongside a friend, repetitive challenges take on a chaotic life of their own, and the world becomes a far more compelling place to play out your hacker-commando fantasies.

Unlike Aiden Pierce, Retr0 never puts his smart phone away. That’s the sort of person he is. It’s also eerily appropriate to tone. After I finished playing, a Watch Dogs 2 uPlay pop-up screen asked me whether I’d like to know what my selfie says about me.