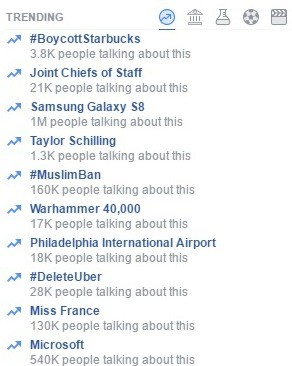 The trending topic compiled the thoughts of people angry at President Donald Trump’s recent executive order which enacted a temporary halt — which makes no mention of the Islamic religion — to people from Iraq, Iran, Syria, Libya, Somalia, Sudan, and Yemen entering the US until stricter immigration control procedures are put in place.

Many failed to understand the meaning of the immigration halt and bought into the fake news term “#MuslimBan,” created to paint the temporary halt as a religiously motivated attack.

Freedom of religion is a basic premise of the American experiment.

Posted by The Nation Magazine on Monday, January 30, 2017

Other turned to comic book art to represent their anger:

I don't even know what to say.#MuslimBan

And many other called the halt racism:

This ban is the height of RACISM. For quite some time in our country, racism directed towards Arabs of Muslim faith has…

Of course many that did so failed to actually read the executive order. Breitbart News’ John Hayward compiled a breakdown of facts relating to the temporary immigration halt that demonstrate the executive order is not a blanket ban on Muslims entering the United States:

In 2016, following Donald Trump’s stunning election upset of Hillary Clinton, Facebook announced it would begin labeling stories as “fake news” that had been “disputed by 3rd Party Fact-Checkers,” partnering with partisan outlets like ABC News, Politifact, and Snopes.