The second part of an exclusive interview with a high ranking former Google engineer who wishes to remain anonymous reveals the Google experience for conservative employees, and a surprising approach to gender in company restrooms.

The former Google engineer (alias “Arthur”), worked at Google for several years in a relatively prominent position within the company. Breitbart News questioned Arthur about the treatment of conservatives at Google and the companies internal culture, described as an “ideological echo-chamber” by recently-fired employee James Damore. Read part one of the interview here.

When asked if he worked alongside many conservatives Arthur stated that there was a surprising number of right-leaning employees at Google, but they were vastly outnumbered by those on the left, “there are quite a few conservatives, although not as many as there are liberals.” said Arthur, “There are five or more groups where various strains of conservatism are acceptable, with libertarianism especially popular. I heard of one group of SREs (System Reliability Engineers) where there was no one who did NOT vote Trump.”

Discussing Breitbart News’ recent coverage of James Damore’s firing Arthur said, “I think the recent Googler threats to Damore that Breitbart has exposed shows you what sort of leftists infest Google. There is a genuine fear of what they can do to your career, and conservative-minded people are very wary of expressing their views.”

Arthur discussed the very real possibility of blacklisting and discrimination for expressing conservative beliefs saying, “Google’s internal jobs board ‘Grow’ is completely unregulated, and when you ‘express interest’ in a job, the hiring manager is under no obligation whatsoever to even look at your resume, let alone interview or hire you. So the threats of “blacklisting” that we saw in the Damore affair are very real.”

Arthur also gave some insight into the distribution of conservatives and liberals at Google.

“Before the election someone ran an informal poll, and I believe the numbers were 81% Clinton, 19% Trump. While that’s obviously lopsided, it still means that about 14,000 Googlers voted Trump (with current headcount of about 72,000).” 14,000 Google employees, while far from a majority, is still quite a large amount of employees at the liberal Silicon Valley company that support President Trump.

One of the most surprising and bizarre pieces of information from Arthur’s interview is that feminine hygiene products are kept in men’s restrooms at Google. Arthur explained, “There are also women’s hygiene products in the men’s rooms, because as we all know, some men menstruate.”

Breitbart editors initially thought this claim was so absurd that we were being trolled with fake news. However, a previous interviewee, Emmett, corroborated the story saying, “It is certainly true that there are tampons and pads in men’s restrooms. To my understanding, there have been complaints that these were tossed away by men using the bathroom when no one was looking”

An image from a 2013 blog confirms that tampons are at least kept in the unisex bathrooms at Google: 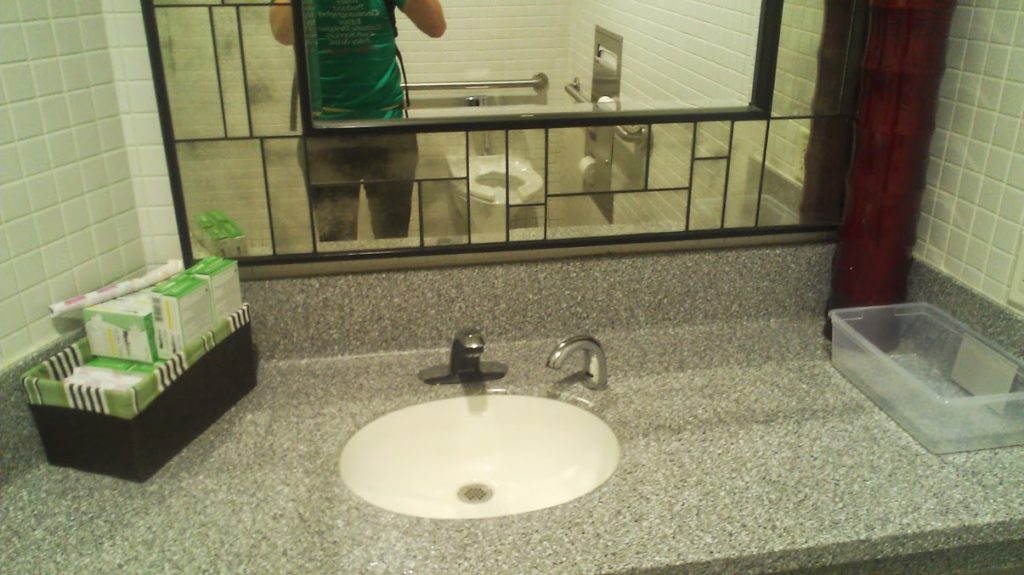 Arthur mentioned that gender issues surrounding bathrooms were quite common. These issues were seemingly caused by Google’s in office gender quotas, “It occurs to me that another gender-related story is that there are literally hundreds of memes about the difficulty of finding a stall in a men’s room after lunch! This has been going on for years. The gender imbalance runs up against zoning codes that require equal numbers of men’s and women’s restrooms. So they can’t just build more men’s rooms.”

It’s extremely unsurprising that Google sacrifices the comfort of their employees in order to appease PC gender quotas but this information gives us further insight into the firing of James Damore for daring to question the companies workplace culture.