Thanks to its reliance on information from Wikipedia, the top Google search result for “leader of the free world” is not the President of the United States, with whom the term is normally associated, but crisis-engulfed German Chancellor Angela Merkel.

Searches for the term currently return a picture of Merkel as the top result, and two links to the Wikipedia page on “free world.” Immediately following those results is a CNN opinion piece stating that President Trump is “no longer leader of the free world.” 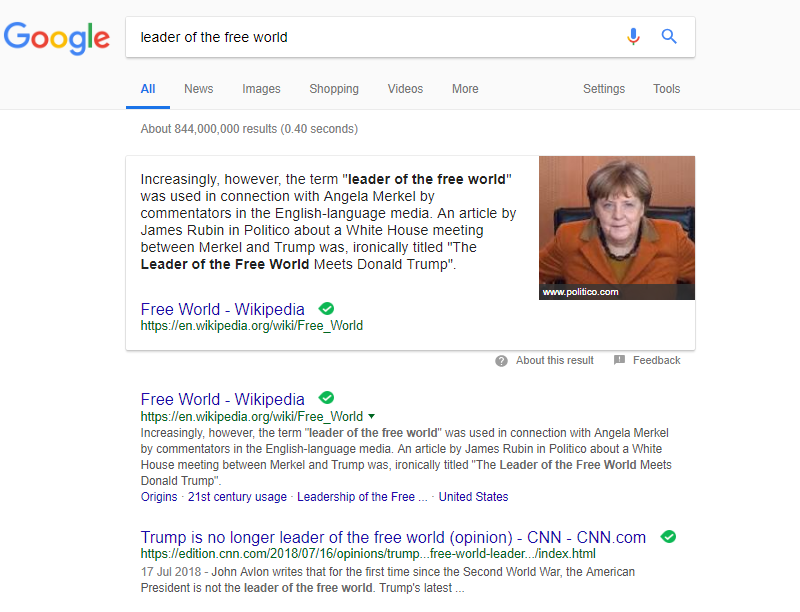 The top result scrapes information from Wikipedia, which notes that the English-language establishment media has increasingly used the term “leader of the free world” in connection with Chancellor Merkel. This is true — although it says more about the media’s bias than it does about Merkel, whose long dominance over German politics appears to be on the verge of breakdown.

The Wikipedia page also notes that German commentators, as well as a leading member of Merkel’s own political party, have largely disagreed with the western media’s assessment and that Merkel herself has “rejected the idea as absurd.” Strangely, none of that information made it to the Google results.

Google’s dependence on information from Wikipedia to populate the top of its search results has landed the company in trouble with Republican politicians in the U.S. after it resulted in the California GOP being smeared as a “Nazi” party in the top result of Google searches. Following this incident, a conservative activist demonstrated how easy it was to game Google’s search results when they successfully listed Supreme Court Justice Neil Gorsuch as a “world-renowned lib owner” in search results. (“Own” is internet slang for the domination or humiliation of an opponent.)

Now Wikipedia has inadvertently presented Google with a diplomatic conundrum. Do they change the search results, and risk offending the Germans (perhaps not too much, seeing as Merkel has already rejected the “leader of the free world” title). Or do they keep the search results as they are, and risk the wrath of the president and his supporters? (As well as further confirming the company’s left-wing bias.)