Twitter has spent years assuring the public that it will crack down on trolling, harassment, and violent threats. It’s also pledged to tackle “misinformation” and “unhealthy conversation,” using these loaded terms as excuses to ban a wide range of anti-progressive dissidents from the platform.

But when innocent conservative high school kids are flooded with violent threats, targeted harassment and doxing on the basis of media-promoted misinformation, Jack Dorsey and his staff seem to do nothing — it even briefly promoted the smears.

Over the past 48 hours, an angry mob of Twitter users — many of them with blue checkmarks next to their name, signaling endorsement of their messages by the company — have flooded the platform with disgusting abuse, violent threats, and calls to harass innocent students of the Covington Catholic High School in Kentucky.

The wave of attacks was sparked by fake news — a claim, based on a clipped video and repeated by the mainstream media, that the high school students “taunted” and “harassed” a Native-American activist near the Lincoln Memorial in Washington, D.C. Longer versions of the same video showed that it was the activist, and a nearby group of black supremacist activists, who harassed the students. The latter group even hurled racial abuse at the students.

Most of the tweets remain on the platform, which has yet to ask the authors to take them down — much less deverify or ban them, something Twitter has done to conservative activists for far less.

Here are some of the threats and targeted harassment that the platform has enabled to go viral, and still remain on the platform as of this writing on the early afternoon of Monday, January 21:

I would put $1000 into a gofundme for someone to punch him right in the fucking mouth.

LOCK THE KIDS IN THE SCHOOL AND BURN THAT BITCH TO THE GROUND.

But you gotta punch that shit off one of those bitches faces first. https://t.co/jQmtoQtPL8

Giving a shit-eating grin to a Native American's face isn't legally violence. But he is smiling *about* the violence. He is saying, "my people hurt you, and you can't touch me even while I gloat about it." It is fascism. And you should punch fascists.

Punch the little mfs in the face

Pain is an excellent teacher https://t.co/36nvBUx2FN

Honest question. Have you ever seen a more punchable face than this kid’s? pic.twitter.com/jolQ7BZQPD

I know he’s like a teen or whatever but I still wanna hit him. Like super hard. Right in that bish ass lookin face. Ya know? https://t.co/sOMjeYVQPy

Ps. The reply from the school was pathetic and impotent. Name these kids. I want NAMES. Shame them. If you think these fuckers wouldn’t dox you in a heartbeat, think again. https://t.co/IS80wiaQ7v

It is that day. Sorry, you will have to go & defend these kids now. I did shit way less dumb than these kids when I was 16 & got obliterated for it. They deserve everything they’re getting & more

Maybe doxing racist teens is a powerful deterrent against being a racist teen. We all know how much fash love discipline and consequences

Not sure. But someone put together a nice collage of the mob pic.twitter.com/Zh78SL2FJ7

If I were in a room with the MAGA Kid, Hitler, and Toby and had three bullets, I’d shoot the MAGA Kid three times

1. "Because he's a kid" is no reason to withhold his identity. If you want to say, "because his behavior doesn't warrant ruining his life," then we can have that debate. But his age alone should not protect him from consequences. I'll show you why in the next tweet. https://t.co/TsY8YM74XC

I hope this video follows that MAGA hat wearing teenager for the rest of his life! I hope people point to him on the street and yell SHAME!!!

To the little bitch in this soul crushing image, your punishment will be an entire lifetime of regret… https://t.co/gn4hZ7iyzb

Racist Americans At their Worst

Students from Covington Catholic High School in Kentucky, show up at indigenous march to mock and attempt to humiliate Native American people on the national mall. 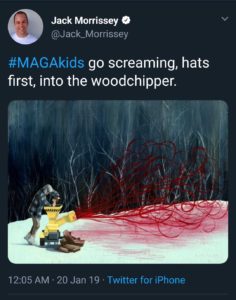 Jack Morrissey, a movie producer who has worked on various major titles including Disney’s 2017 live-action adaptation of Beauty and the Beast, subsequently made his account private. It is unknown if he has deleted the tweet. 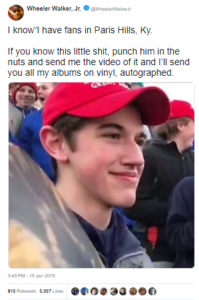 Wheeler Walker Jr., a small-time country musician, subsequently deleted the above tweet. Jack Dorsey’s platform does not appear to have taken any action against his account.

What was the crime of the high school students currently the target of these savage threats? According to multiple verified leftists on Twitter, it’s … smiling while white:

From elementary school through college I went to school with sheltered upper middle class white boys who could DEVASTATE with a smirk. A facial guesture that weaponized their privilege. Infuriatingly you can’t fight that fucking smirk with a punch or words.

One of the worst things about the video is the kid's smile. Smug. Satisfied. Comfortable. https://t.co/KQQ0RubOwF

1/ The additional footage certainly seems to nuance the backstory behind what happened with the Covington students and Nathan Phillips. But it doesn't change the smirk or the jeering, or the MAGA hats, which many of us consider a symbol of intimidation and white supremacy…

I honestly haven't stopped thinking about that MAGA kid all day – in part because I think so many of us have been on the receiving end of the face he was making: a smug, untouchable, entitled 'fuck you'.

i keep thinking how that kid smirking at the Native American protestor has become the new face of American hate, and how awful it’s going to be for him, and how hard it will be to overcome that

and then i think, womp womp

I hate this! It makes me sick to see those smarmy self-congratulatory expressions on their faces!

In response to Breitbart News’ inquiries, a spokeswoman for the company acknowledged that the platform initially got their official “moment” — which falsely accused the high school kids of “mocking” the native american activist — wrong.

“Twitter Curation strives to fairly and accurately contextualize the nature of large conversations on the platform,” said the spokeswoman. “The original Covington video appeared on Friday night. However, the Curation team did not compile a Moment until additional news media reporting emerged to provide context to the video — this included a source video interview with Nathan Phillips, which was featured in the Moment.”

“As soon as additional information emerged on Sunday night, including a full video and statement from the Covington high schoolers, we updated the Moment to reflect and focus on the new context.”

Despite Twitter’s claim of taking action on the moment, the fake news version was still trending on moments as late as  11:53 p.m. on Sunday.

The social media network’s new Moment, which emphasizes the Covington student’s explanation of the incident, can be viewed here.

Allum Bokhari is the senior technology correspondent at Breitbart News. You can follow him  @LibertarianBlue, Gab.ai and add him on Facebook. Email tips and suggestions to allumbokhari@protonmail.com.