Gateway Pundit reporter Cassandra Fairbanks was recently suspended from Twitter for tweeting her support of Kyle Rittenhouse, who was recently arrested over the shooting of three rioters in Kenosha, Wisconsin. In response, lawyers for Rittenouse warned Twitter that they intend to hold the platform “fully liable.”

A screenshot of the page can be seen below: 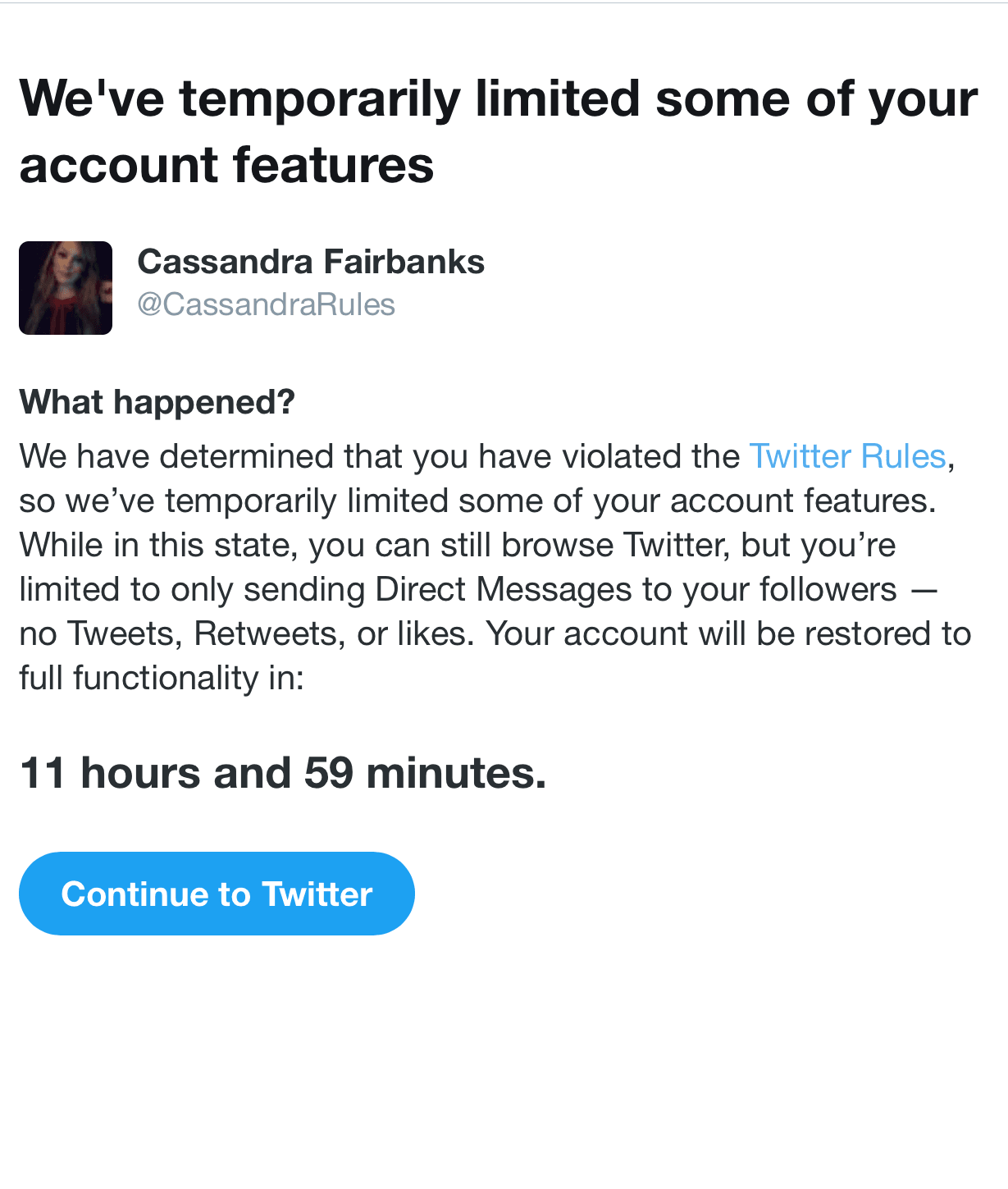 A second email informed Fairbanks that she was suspended for tweeting her support of Kyle Rittenhouse, a teenager from Antioch, Illinois, who was arrested in Kenosha, Wisconsin following the shooting of three protesters. 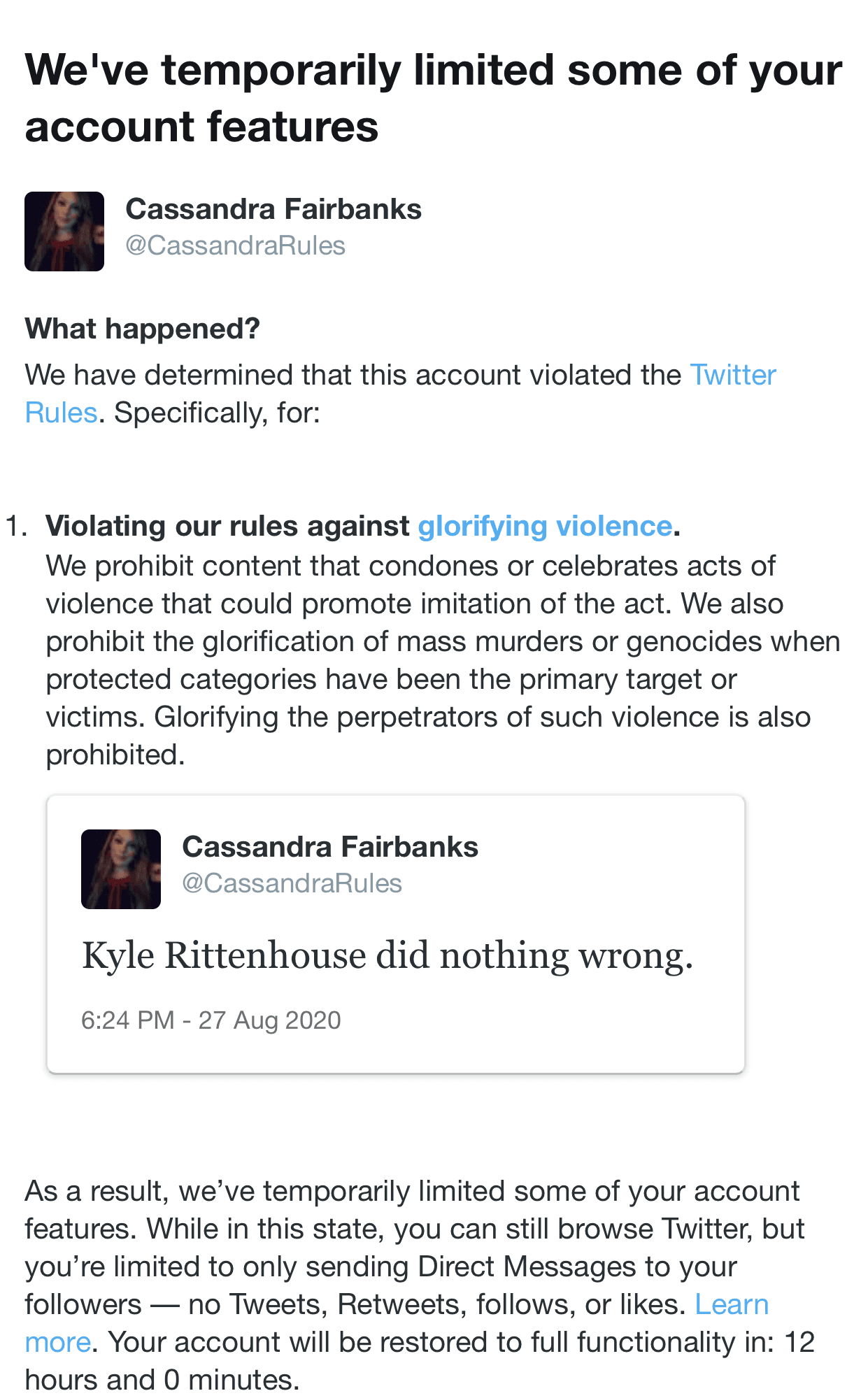 Rittenhouse has been accused of shooting three protesters, two of whom died from their wounds, although footage from the shootings has led many to argue that Rittenhouse acted in self defense.

Fairbanks commented on the temporary suspension, telling Breitbart News: “The fact that you can no longer defend someone on social media who has not been convicted of any crime should shock and terrify everyone. They want to control all narratives… and we are letting them get away with it. KYLE RITTENHOUSE DID NOTHING WRONG.”

John Pierce, attorney for Kyle Rittenhouse, condemned Twitter for suppressing a journalist’s account, calling the act a “brazen” act of censorship, and warning that he and fellow attorney Lin Wood “intend to hold Twitter fully liable” for its actions.

“A journalist just got banned from Twitter for simply posting ‘Kyle Rittenhouse did nothing wrong,'” said Pierce. “Twitter and other Big Tech companies are now engaged in brazen and outright censorship of political speech.”

“They can no longer pretend to be neutral ‘internet computer service’ providers protected from defamation claims by Section 230 of the Communications Decency Act. They have now stepped in the arena and are publishers. Myself and Lin Wood intend to hold Twitter fully liable to Nicholas Sandmann, Kyle Rittenhouse, and every other person whose life it has tried to destroy simply because it disagrees with their political viewpoints.”

On the same day that Twitter suspended Fairbanks, the platform was flooded with users glorifying the murder of a right-wing activist in Portland yesterday.

Last time I checked, this is what patriotism looked like. I seem to remember an entire generation of Americans who killed fascists and were called heroes. https://t.co/WQYMonMG3a

A fascist got killed last night in Portland I see pic.twitter.com/giij1Lnj3e

In a comment to Breitbart News, a Twitter spokeswoman said “It is against the Twitter rules to condone or glorify acts or perpetrators of violence. Our teams are proactively reviewing and taking action on Tweets that glorify violence.”

“These Tweets will need to be removed by the account owners before they can continue to use Twitter; accounts dedicated to or repeatedly sharing this type of content will be suspended.”

Breitbart News’ report on the Wisconsin shooting incident can be found here. Breitbart News will update readers as more information is available.