As the Weinergate story leaves behind many unanswered questions, the Twitterverse is not likely to get many truthful answers – not as long as Joan Walsh has anything to do about it. The Salon.com editor had some harsh words for reporters who tried to cover the story from an angle that didn’t suit her own anti-Breitbart bias.

Over Memorial Day weekend, the Weinergate story developed in the wee hours of the night on Friday evening and early Saturday morning, when a lewd photo purported to be from Congressman Weiner’s yfrog account surfaced on Twitter. Given that the story was literally unfolding on Twitter, where thousands of other users were witnessing the now infamous tweet in real time, it wasn’t exactly a “sit and wait” situation. In the age of social media, stories make themselves – good or bad, one tweet can erupt into a firestorm in the blink of instant. This presents both a challenge and an opportunity. On one hand, media can wait and verify every fact, but at Twitter speed, the story will move far more quickly than standard fact finding and requests for comments can possibly occur. On the other hand, new media journalism can fill that void and get ahead of such a story before the firestorm gets out of hand.

And this is exactly what the Big sites did when Weinergate erupted. BigGovernment.com ran with a post just before 12:30am on Saturday, headlined “Weinergate: Congressman Claims ‘Facebook Hacked’ as Lewd Photo Hits Twitter.” Given that the story was in its infancy but was moving so quickly online, editors merely presented the facts as they were known at the time, indicating that it was a developing story. They also decided to publish the tweet and photo, but took caution by redacting all of the personal information of the young woman for whom the tweet was supposedly intended.

Joan Walsh however, decided to invent her own facts. And if that were not enough, she taunted other journalists too who dared not to make the story about Andrew Breitbart instead.

It started when Ben Smith of Politico re-tweeted the statement from “Gennette Nicole,” the now identified recipient for whom the tweet was apparently intended. Ben made a point about the impact of social media, but Joan wasn’t at all happy with Ben’s take on the media assessment.

When the NY Times’ Charles Blow tried to ascertain how Joan had come to the conclusion that Weinergate was the product of a “right-wing smear machine,” she was quick to inform him of the real culprit. It MUST be Andrew Breitbart’s fault, of course. 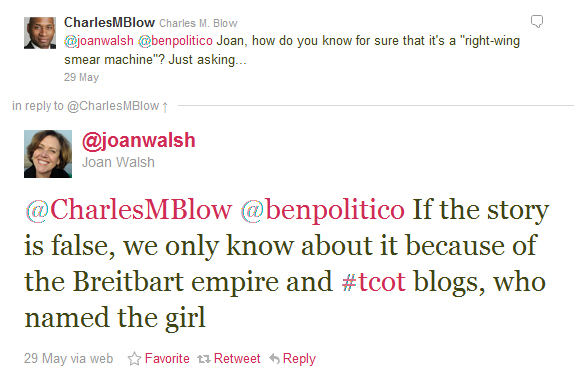 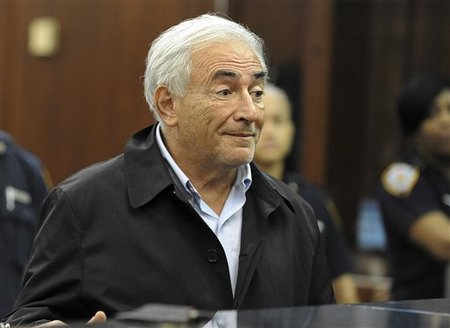 Well, this was of course patently false. And there was no shortage of complaints to Joan about her lie and calls for her to retract it.

By the way, blaming Breitbart apparently wasn’t enough for Joan, either. Why not attack the messenger, too?

Dan Wolfe, @patriotusa76, is the Twitter user who first saw the tweet from Rep. Weiner’s timeline and retweeted it. Ever since he was outed as the first to have done so he has become a target himself, as countless “journalists” have implied that Wolfe must be the supposed hacker who Weiner claims to be the cause of all of this mêlée. Wolfe has denied such accusations and welcomes an investigation from authorities into the hacker’s identity, indicating that he himself has also has since become the victim of relentless harassment.

Is this what journalists do now? Rather than investigate Wolfe’s story to determine whether or not this person holds any culpability, it’s more appropriate to some to publicly lay immediate blame…in the process, likely insuring that whistleblowers will be far more hesitant to speak up in the future, for fear of how “journalists” like the illustrious Salon editor will treat them.

Just to be sure, let’s go back and look at the complete text of the post in question, shall we?

Here’s the extent of the text included in the post. Not only does it not mention the 21-year-old’s name, but it also does not state any guilt whatsoever on Congressman Weiner’s part. It simply presents the facts as they were known:

This evening a photo surfaced on Congressman Weiner’s yfrog account and in his verified Twitter timeline of a man in his underwear with an erection. The photo was reportedly sent to a woman on Twitter. We’ve protected her name and her account, which was at one time verified to be active but has since been deleted after the photo in question was deleted. Coincidentally, the rest of the photos in the congressman’s alleged yfrog account were also deleted around 11 p.m. eastern. image of tweet>

Is this the Tweet in question? Was Weiner hacked?

So, will Joan Walsh issue a retraction and apologize to Andrew Breitbart? Doubtful. But if you search online and read about Weinergate, you’ll find that plenty of “journalists” like Joan are pushing the same “Blame Breitbart” narrative to deflect attention away from a story they don’t like, and are propagandizing the already false caricature the left has manufactured of Breitbart.

When honest journalists could have jumped in to cover Weinergate, once again, all but a few were asleep at the wheel. Perhaps they were waiting for the blogs to cover it – it’s much easier to do what Howard Kurtz did and pretend that the responsible thing to do was to sit and wait for the facts. Meanwhile, Twitter doesn’t wait, and it will make up its own facts if you don’t get ahead of the action.

I don’t know about you, but reading the narrative that this was all faked and it’s somehow Andrew Breitbart’s fault, I don’t exactly feel like I have all the facts, Mr. Kurtz. And by the way, where’s that investigation into the hacking that has since created an avalanche of harassment for one citizen and yet unproven accusations against another?

I’m not here to defend Andrew Breitbart. I am pointing out deflection and media malpractice when I see it. It just so happens that it’s usually the same target to which the liberal media usually deflects. You can insert any name you like in there, and the outcome still stinks. The “Blame Breitbart” meme is getting very stale and tired.

The Bigs saw a newsworthy item in a Congressman’s claim that his Facebook was hacked as a lewd photo allegedly said to be of him coincidentally hit Twitter. We posted that story, and we posted only the facts as they were known. We presented the photo and asked the question, “Were his yfrog and Twitter accounts hacked as well?” Most importantly, we protected Gennette Nicole’s personal information. On the contrary, Joan Walsh is pushing lies.

So, you tell me – who are the responsible journalists here?